This game tricked me. When I first saw the store page, I saw a bunch of characters from BlazBlue, Guilty Gear, and the River City series, all series that I enjoy. So when I saw all of those characters together in one game (a game published by Arc System Works at that), I just had to check it out. Well, as it turns out, I was tricked into playing a mediocre action platformer that just happens to have those characters in it.

At first glance, CODE SHIFTER looks like it could be a cool game. It’s got all of these great characters, some great spritework, and even a separate Smash Bros.-style game mode. However, once you strip away the characters (and the art that goes along with them), what you’re stuck with is a pretty average action platformer, the kind I would expect to see from the DS eShop.

You play as a programmer working in a software company, whose goal is to dive into their in-development video game to fix bugs. These bugs of course take the form of enemies that roam around a 2D level and you’ll need to traverse these levels to defeat the bugs and reach the end. It’s a pretty straightforward formula and there really isn’t anything to make it, well, anything but that. The platforming is floaty, the combat isn’t all that satisfying, and the level design is pretty barebones. The story that separates each level is also lacking.

So what better way to mask these problems than by adding in a bunch of characters from well-established series. That is exactly where CODE SHIFTER got me, as I would have absolutely passed up the game otherwise. Sure, the added characters diversify the gameplay a little bit, but they don’t fix the core of the game’s issues. It’s still the same old mediocre platformer, just with some cool characters slapped onto it.

If anything, the separate Smash Bros. game mode was a bit more fun to play around with, but that mode is only fun to an extent. The combat is not fleshed out enough to warrant playing this mode for more than maybe an hour. It’s honestly a bit disappointing, as a fighting game in that style with this roster would be very cool.

I should also mention that this entire experience is locked to 30fps. I can understand some games being locked to 30fps (like visual novels), but for an action-platformer with a fighting minigame, it’s just not acceptable. It’s 2020 now and games already receive complaints for being locked at 60fps, so 30 is really pushing it.

With all of that considered, I cannot recommend CODE SHIFTER. It’s a mediocre action-platformer that masks its problems with characters from established series. It was cool to see all of these characters together in one place, but when the underlying gameplay is as barebones and boring as it is here, it’s hardly worth the time. Don’t let the game trick you like it did me. 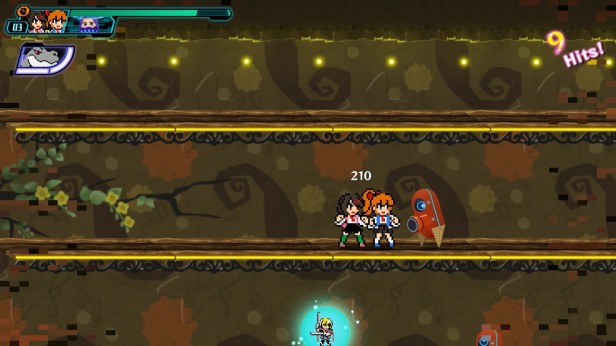 You can buy CODE SHIFTER on Steam here.