LUNA is a game that shows that you don’t need high production values or even dialogue to tell a story. It’s a simple point and click adventure about a young boy and his animal companion, with a brilliant art style and soundtrack to accompany it. The result is a very aesthetically-pleasing game. However, it doesn’t necessarily do this without sacrificing a lot in return.

Great art and music. Unlike most other point and click adventures, LUNA takes a traditional approach to its art. All of it is hand-drawn and animated, with the store page even advertising its 3-layered 12fps animations. It does this for good reason though, as the art is some of the best I have seen in the genre in years. The hand-drawn approach really gives life to the game’s environments, characters, and cutscenes. Yes, even the cutscenes were done in this style, and there’s 20 minutes of them too. The fact that the story is told without dialogue adds a nice touch to these cutscenes as well.

But of course, it isn’t just the art selling the game’s aesthetic, there’s also the great soundtrack to go alongside it. The tracks are mostly atmospheric pieces, but there are quite a few standouts, especially those that play during the cutscenes. In fact, my personal favorite ended up being one of those very tracks, a track named “Childhood Memory”. The music is great overall and is the perfect complement to the game’s hand-drawn style. 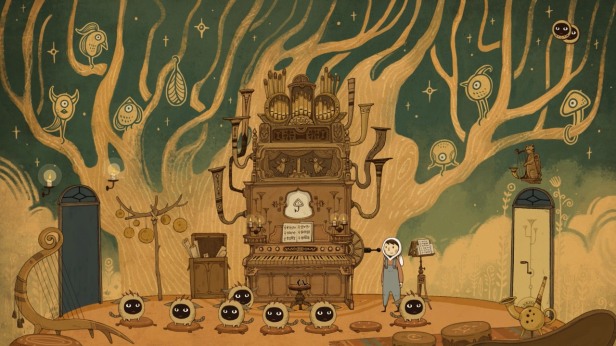 Puzzles lack any sort of depth. Given that LUNA is a point and click game, there is a heavy reliance on puzzles to keep the experience interesting. Unfortunately, this is where LUNA falters, offering up a variety of puzzles that are not only incredibly basic in their design, but lack any sort of depth to them. A lot of the puzzles simply require memorizing short patterns or taking information from one area and applying it to another — it was like I was playing some Reader Rabbit game. Some of them are so basic that I find it hard to even classify them as puzzles, such as one where I had to match the symbol on a book’s cover to its corresponding character on a larger a book. It’s not just one or two puzzles that are like this though, it’s the entire game with the exception of one puzzle right before the end.

Really, the most depth you’ll get is from the game’s perspective-swapping mechanic, which allows you to freely swap between the two playable characters. This is a great mechanic on paper, but the game hardly uses it to its full potential. Oftentimes, the mechanic is only necessary to gather information from one area that the human character could not have reached otherwise, allowing them both to advance to the next puzzle. I can understand if the game was trying to aim for a younger audience, but even then, it’s hard to ignore such faults. 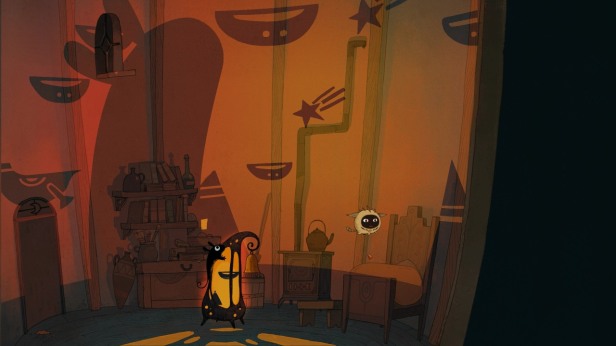 Overly tedious puzzle design. Simple puzzle design can be forgiven to an extent, especially if the game is aimed at a younger audience or if the focus is more so on the story side of things. However, LUNA goes one step further by not only making its puzzles incredibly simplistic in their design, but overly slow and tedious as well. A lot of the time, I would immediately see the solution to a puzzle, but would be forced to go through the twenty or so steps to solve it, sometimes repeating the same basic action over and over.

The book cover puzzle I mentioned previously is a great example of this. To solve it, you simply need to look at the required symbol, hop in a minecart and watch a 20 second cutscene of you gathering books, eject the books from the minecart, and then select the book with the correct symbol on its cover. It’s simple enough, but you need to do this four times, meaning you have to watch that slow cutscene over and over. What makes this example even worse though is that sometimes you won’t even get the symbol you need on the first try, meaning you have to go back through that cutscene again.

Puzzles like this are not fun to complete. If anything, they are chores meant to inflate the game’s playtime. In fact, if I were to cut out all of the slow walking animations and repetitive puzzle mechanics, my two and a half hour playthrough may have taken me just an hour. That just goes to show how much the game relies on its tedious puzzle design, which, when combined with its lack of depth, makes for a deadly combo, one that pretty much zaps all the fun out of the experience.

As a fan of the genre, I have to say that I am disappointed. LUNA is a fantastic-looking game with some great music. However, it pairs this with puzzles that not only lack depth, but are overly tedious in their design. The result is gameplay that just feels like a cycle of chores to complete until the credits roll, hardly something you’d want out of a point and click adventure. The story, while decent, isn’t enough to warrant slogging through such gameplay, so you’re better off looking elsewhere.

You can buy LUNA The Shadow Dust on Steam here.