Taishi is the latest in the long-running Nobunaga’s Ambition series, being the fifteenth entry. I have only ever played one of these entries in the past, that being Sphere of Influence: Ascension, but that was during a Steam free weekend, so this review should serve as a fresh look at the game from one that has little experience in the series.

Huge amount of characters to choose from. The amount of options when it comes to what character (and what clan) to play as is actually overwhelming. Koei Tecmo stays true to the historical aspect of the game, offering players the ability to pick from any clan that existed during the time period depicted in any of the games scenarios, ranging from 1545 to 1582. This includes popular choices such as Tokugawa Ieyasu, Uesugi Kenshin, and of course, Oda Nobunaga. However, it also includes much smaller figures, a ton of which I have never heard of, such as Michimori Tozawa and Matsura Shigenobu. There is definitely no shortage of options to choose from when tackling a new playthrough.

Delegate feature. I quite liked the game’s delegate feature, allowing the player to delegate certain aspects of the game to the computer. For example, if the player is tired of managing his/her clan’s agriculture, then it can simply be delegated to the computer. This just puts it on auto-pilot, not doing anything too risky (or costly), but doing enough so that it is sustainable. This feature was particularly helpful when I was waging war, as it allowed me to focus on just the war, without having to worry about commerce, agriculture, development, etc. In fact, I could basically put the majority of the game on auto-pilot if I delegated everything. The only input needed from me at that point would be advancing the turn. It is possible to go further via the game’s demo mode, which allows the computer to control the entire game (including turn advancement), but that removes all player control (and should only be used for demos, hence the title).

Engaging combat. One of my favorite aspects of Taishi is how the combat is handled. Not only is it fun, but there are numerous strategic layers to it. For one, the player is able to decide the strategy for each battle based on the officers in his/her army. Some may offer up unique plans, such as the Five-Color Brigade or the Phantom strategy. Each has its pros and cons and were quite fun to toy around with when figuring out which worked best against which enemy. On top of that, the player is able to control units of his/her army separately, so dispatching smaller units to circle around and ambush is a viable strategy. In fact, it is a necessity, as morale is a huge factor in each battle. Units that get surrounded, ambushed, or overwhelmed in any way lose a lot of morale, which can potentially cause them to break, severely impacting their combat strength and not allowing the player (or computer) to issue orders to them directly. The game encourages strategy in this way, forcing the player to keep morale in check while also figuring out the best course of action for taking out the enemy. 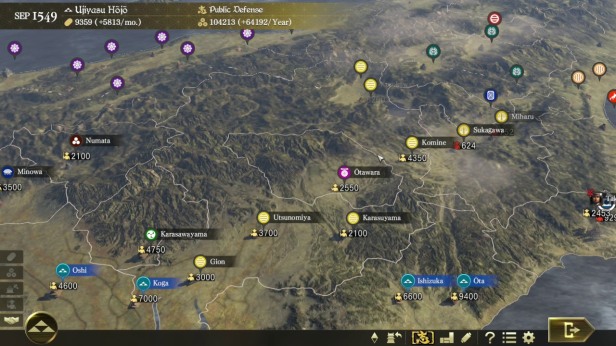 Shallow strategy elements. I did appreciate the number of different strategy elements included in Taishi, like the commerce, agriculture, goodwill, and development aspects, but there are a few that are just really shallow. The goodwill element, for example, is really barebones and does not require much input on the player’s part. All that element involves is just picking an officer to send out to another clan and setting the desired opinion (which is represented numerically). I would just select one of the higher-ranking officers in my clan, set the desired opinion to 40 (the level required for trade), then wait a couple turns for the result. There are a few other areas that have similar simplicity that I wish the game had made at least a bit more complex, so as to make them enjoyable to manage. As it stands though, these areas are just a bore to manage and are oftentimes just better left delegated.

Limited quest system. The game’s quest system, allowing the player to reenact historical events that occurred during the time period covered by each scenario, was a lot of fun to play with. Given the amount of characters, I was super excited to just pick up and play the most random clan and re-enact their history as laid out by the game’s quest system, only to discover that the quest system is only implemented for a few of the clans in each scenario. This severely limits the game in terms of content, as picking a clan that does not have its own quest system is then played like any other clan that also does not have its own quest system. The only difference there being the clan’s resolve (basically the overall personality of the clan) and their territory on the map. It is just much more enjoyable to play a clan that has this quest system implemented.

Lackluster graphics. The graphics are pretty bad for a game that came out in 2017. The map just looks low-res, with blurry terrain and blocky buildings. The battles are not all that visually appealing either, but I spent most of my time zoomed all the way out, so at least it was not too noticeable. I would expect these graphics coming from a mobile game. However, upon further research, I found that this very game is available for mobile devices in Japan, so perhaps that is why the graphics are so subpar, as they may have been made so in order for a mobile port to be possible. This is at the expense of PC and console players though. 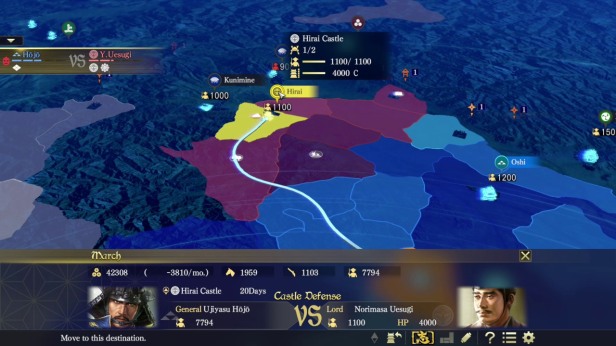 A pretty good strategy game overall. The combat is engaging, the number of characters is vast, and the delegate feature is pretty handy. However, the graphics are rather subpar and a few of the strategic elements are shallow. Despite this, the game is fun to play and definitely earns my recommendation.

You can buy Nobunaga’s Ambition: Taishi on Steam here.