Tsundere Idol is the second nukige release from Cherry Kiss, the first being Wild Romance: Mofu Mofu Edition (which I will be making comparisons to in this review). As with their first release, Tsundere Idol is sold on Steam in a barebones state and requires the free 18+ patch in order to restore the full experience.

Textbox opacity. Having the ability to change the textbox opacity is a must-have in any visual novel. As such, I was glad to see that, this time around, Cherry Kiss included the feature, as it was missing in their last release. In fact, the original Japanese release of Tsundere Idol does not include the feature, so this is technically an improvement upon the original.

Character sprite animation. Speaking of improvements upon the original, the English release also adds some character sprite animation. This animation takes the form of minimal facial movements, such as blinking and opening/closing the mouth when speaking. The game only has one sprite, that of its heroine, Rui, so the animation is limited in that regard, but still appreciated. It gives a little life to an otherwise lifeless game. The one downside is that it is not configurable, so those that find it off-putting will be stuck with it.

Good art. While the overall art is not as good as Wild Romance, Tsundere Idol still has some pretty decent art. The backgrounds look good, the CGs are nicely done, and the character sprite actually looks decent when zoomed in on. Most visual novels just look blurry when character sprites are zoomed in on, but this blurriness is minimal in Tsundere Idol, much to my surprise.

Lack of character poses. While the art may be nice, the game does suffer a bit from having only one character pose. Rui’s costume and facial expression does change, but she maintains the same pose throughout the entire game. The only time the player does not see this pose is if Rui is not present in the scene or if some CG is being shown instead (although there is only one CG outside of the game’s H-scenes). At least Wild Romance had hidden its few character poses behind a plethora of CGs (plenty of which were outside of the H-scenes). Tsundere Idol just feels cheap in comparison.

Awful background music. I actually laughed out loud when I first loaded up the game and heard the background music abruptly loop after just 33 seconds. The music itself is bad enough, but having it loop after such a short interval is just painful. I even went and timed how long some of the tracks lasted and found that, on average, they last about 59 seconds before playing back from the beginning. This would not be as annoying if the tracks actually looped well, but none of them do, with the start and stop of each being very noticeable. The game even recycles some music from Wild Romance, but I imagine that this is because the original developers just pull from the same pool of music for all of their releases anyways, so that cannot be helped. The music can be muted though, so props for that.

No text speed option. It seems like Tsundere Idol exchanged one important visual novel feature for another here, gaining the ability to adjust the textbox opacity, but losing the ability to adjust the rate at which the text displays itself. Being the fast reader that I am, the current rate is just too slow and I was surprised to see that it is not configurable given that Wild Romance had this feature. Hopefully this is something that can be patched in, as the game definitely needs it.

Bad translation. Tsundere Idol’s translation is a serious drop-off in quality compared to Wild Romance. I am almost positive that the translator is not a native English speaker, as many of the game’s sentences are just far too wordy and do not flow well. Makes me wonder how it got the okay in the first place? 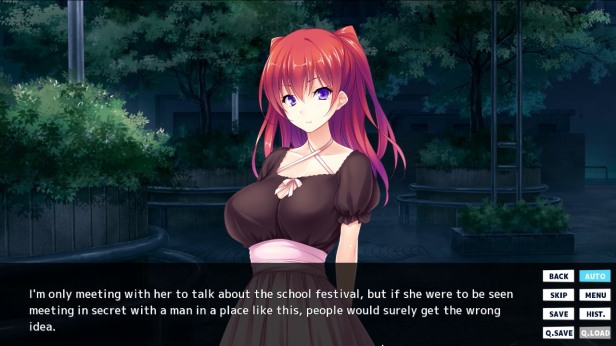 As with Wild Romance, I will not be assigning a score to the game, as I avoid doing so for H-games. Overall though, Tsundere Idol is a rather poor nukige. The art is fine and the character sprite animation is cool, but the translation is pretty bad and the background music is downright painful. On top of that, the game is missing the text speed option. I would honestly just recommend getting Wild Romance: Mofu Mofu Edition over this one, it is just the better game (and is also three times as long).

You can buy Tsundere Idol on Steam here.