If anything, Think of the Children has further solidified my reasoning behind never becoming a parent. This game gives some firsthand experience when it comes to being a parent, and I went at it solo, doubling the frustration. 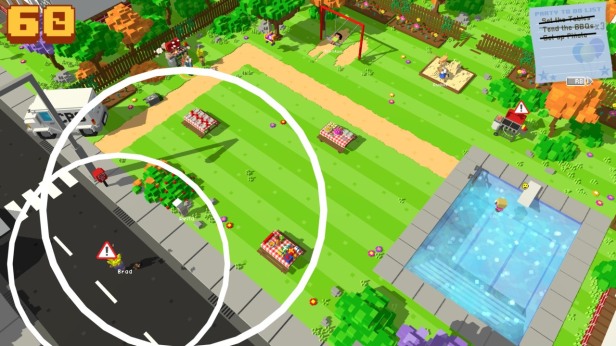 Brilliant concept. I have to give it to this game, the concept is brilliant. Really goes to show just how hard parenting can be, but in the most ridiculous manner possible. I was constantly having to stop the kids from drinking bleach, drowning, being abducted by aliens, while also checking off everything on my grocery list. You know, everyday parenting things.

Fun story. Honestly did not expect this kind of game to have a story at all, but Think of the Children actually has a fun, goofy little story to it. The story links together the different levels in a very cartoony manner, befitting of the game’s art style. The humor element in the story really carried it and actually made it entertaining. The story element may have been completely unnecessary considering the type of game this is, but was definitely a nice addition regardless.

Customization options. Think of the Children also features a customization mode, or rather, a create-your-own-parent and child mode. Different outfits, accessories, and such can be unlocked by playing through the game, as rewards at the end of each level. Several of the different hats are even references to other works. Mario’s hat makes an appearance as well as Ash’s cap. I can even equip Goku’s hair if I wanted to. There are quite a bit of these different accessories. I only had a fraction of them by the time I beat the game. The customization was a nice touch, allowing me to create my ideal parent self, with top hat and all.

Difficulty scaling. Think of the Children has taught me a valuable lesson about being a single parent: do not be a single parent. This game was obviously designed to be played cooperatively. I cannot speak for the co-op play, but the solo experience was beyond frustrating. Some of the levels were absolutely painful to play through as a solo player and when I eventually passed each level, it was usually with the bare minimum score. The difficulty is simply not scaled back for singleplayer play.

Lack of difficulty curve. Think of the Children also has an issue with its difficulty curve, or rather, lack thereof. The first couple levels, especially the second, are very difficult to complete. Then the game gives you the next few, which are much easier. Then the game gives you an even harder level before returning to the easiest couple levels in the game. The difficulty was simply all over the place. It did not increase as the game went on, but rather just fluctuated wildly.

The only difficulty change that made sense was the last level, which was much, much more difficult than any other level in the game, frustratingly so. It may not have been as frustrating if there was at least some sort of difficulty curve present, but there is not, so that last level destroyed me. It took me a little over an hour to clear every level up until the last. It took me an entire two hours just to complete the last level, a level that can be completed in just a few minutes. By some act of God I managed to clear this level, joining the 0.2% of players that have cleared the game solo.

I would absolutely recommend against getting this game if you are going to go at it as a solo player. It was designed as a cooperative game and it shows. The devs have promised a balance update, but it has been some time since release and that update has not yet surfaced. If you have buddies to play it with, then give it a shot, but stay far away otherwise.

You can buy Think of the Children on Steam here.