Yomawari: Midnight Shadows is a deceptively cute horror game. It makes that fact clear quickly. I was not expecting to actually be scared by a game with such cute protagonists, but I was wrong. The game manages its atmosphere well, has a large world to explore, and generally is a good horror game all around, even if there are a few annoyances. 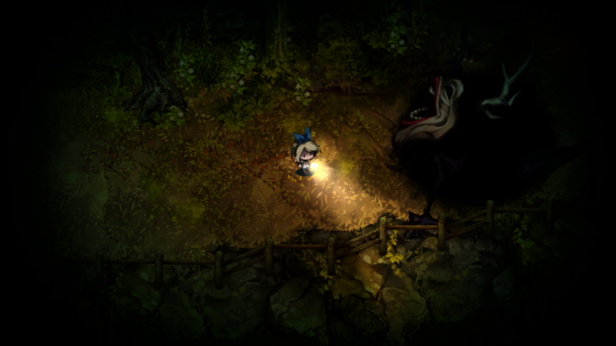 Great atmosphere. This game does an incredible job at maintaining its atmosphere, one of constant unease. In place of a soundtrack, the game just plays constant ambient noise, showcasing the top-notch sound design. An example of this would be the several audio cues used when certain enemies are nearby or when something is about to happen. Another being the character’s heartbeat increasing when enemies get near. There is a lot of emphasis placed on the sound design and that emphasis is well-deserved.

The game’s graphics were equally important in projecting this atmosphere. There are a wide variety of enemies and each has its own unique and creepy design, contrasting the cute designs of the main characters. The backgrounds are also very well-done with a high level of detail. The amount of work that went into preserving this atmosphere is just incredible.

Large world to be explored. While the game may hold your hand at times (placing blockades in certain areas and using a dog to give directions), there is still a pretty decent amount of exploration to be done. The game’s world is actually quite big. I beat the game in just under six hours and still had several areas left to explore. There are plenty of collectibles to find and achievements to unlock just by exploring. This adds a lot of potential playtime for achievement hunters like myself.

Variety of game mechanics. Outside of basic movement and the ability to toss certain objects, the game is really lacking in the amount of mechanics offered. For example, during the tutorial, the player is instructed to push a box into place in order to move onto the next area. It is a simple mechanic, but it is only ever used past that point maybe two or three times. There could have been several interesting uses for this mechanic, but the game simply does not take advantage of it. Most boss battles are just a combination of avoiding attacks and pressing A when necessary. The throwing of rocks or paper airplanes (used in normal gameplay to distract enemies) is not incorporated at all in these boss fights, which was rather disappointing. In a sense, this makes the game more accessible, as it is not complex at all, but it can drag down down the experience at times.

Slow and repeated cutscenes. Usually before each boss fight a cutscene is played, in which the character usually gives some dialogue and may look around or do some other minor movement. I found that these moments were incredibly slow compared to the rest of the game, especially considering that a large chunk of it is spent running away from enemies. The constant shift from high-intensity gameplay to more mellow scenes was a bit jarring. It also does not help that during some boss fights, if I were to die and respawn, I would be forced to sit through the same slow cutscene before getting back into the boss fight.

Yomawari: Midnight Shadows is a solid horror game overall, my favorite of the year thus far. The incredible job done towards maintaining its atmosphere and the sheer amount of exploration to be done are my favorite aspects of this game. Even with the small amount of game mechanics and the slow cutscenes, I still had a great time.

You can buy Yomawari: Midnight Shadows on Steam here.