I love playing co-op games. Some of my fondest gaming memories come from playing such games. I also like samurai, be that in film, games, books, or just in general. So I was very excited to see a game combining those two very things into one package, a beat ’em up game by the name “Samurai Riot”. The game features some nice co-op elements and a branching storyline where player choices actually matter. However it lacks in enemy diversity and basic player combos.

Emphasis on cooperative gameplay. Since the game emphasizes its co-op content, I opted to play the game with a friend. A wise decision, as the co-op elements made the game a lot more fun. Working together with a buddy builds the co-op meter at the top of the screen that, when filled, allows the use of a “co-op attack”. This attack is very powerful and we used it constantly, especially during boss fights. The decision-making is also split between the two players, with both picking what he/she wants. While my friend and I usually were unanimous with our decisions, on the occasion that we were not, the game prompted us with a PvP duel, the victor deciding which route to go down. These co-op features were a welcome change to the classic beat ’em up formula.

The environments and music. The graphics are pretty standard for this type of game, but the background art was fantastic throughout. The artist really captured the “samurai” feel with each environment, especially with the castles. The environments looked very similar to what I actually experienced during my trip to Japan earlier this year. There is also the soundtrack, which works quite well with the art in establishing the samurai setting. Fantastic work on those fronts.

Great replayability. Not only does the game have eight different endings, there are also some other good replayability features. These come in the form of scores, times, and unlockable character traits. The score earned at the end of each run can also be used as currency to unlock different character traits. There are four unlocked by default, but a number of others that can be purchased, such as additional aerial attack damage or bombs that release poison clouds. It does not take too long to play through the game, barely an hour and a half, so these features are a great addition.

Lack of diversity among enemies. I find that the game is quite lacking when it comes to enemy diversity. We ran into the same enemies constantly throughout the game, even between different areas that could have easily benefited from area-specific enemies. In fact, a large portion of the enemies we fought were just recolored versions of previous enemies, usually with larger health pools and a different method of attack. It was fun finding new enemy types, but those moments were few and far between.

Short command list and lack of basic combos. By default, there is the primary attack (be that a sword strike or a punch) and a kick. These are the two moves used primarily throughout the game, but there are no combos combining the two. I cannot go from a kick into a sword strike into another kick, it simply does not feel smooth to do so. The game could really benefit from the addition of simple combos utilizing these attacks. The command list in general is a bit short as there are only a few special attacks (like a running kick or a focused punch). Also worth noting is how useless Tsurumaru’s block is. During our runs of the game, we rarely found it useful. The bosses break right through it, and it only blocks one side, unlike the enemies which can block both while facing one direction.

Typos and grammar. Although not a huge deal, it is worth noting that the game is littered with numerous typos and grammar issues. The team behind the game is French-based, so English is probably not their first language. However, it does not take long for these typos and grammar issues to surface. When selecting a character trait, the word “dommage” is used a few times. This appears right next to properly used instances of the same word “damage”, leading me to wonder how that even happened. Minor grammar issues exist as well, with one of the character traits being: “All your attack will have a chance to poison your enemy”. The game just needs an additional quality check for its English translation. 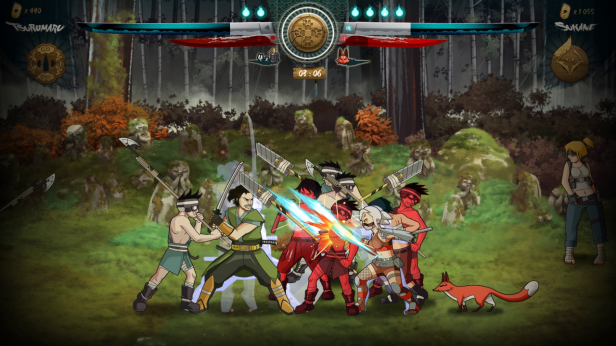 Samurai Riot is a fairly standard beat ’em up game overall. The cooperative gameplay elements were well executed and the branching storyline was a very cool addition, but the enemy diversity really could have used some work, and the addition of some basic combos would have been nice. If you are a fan of the genre, I would recommend taking a look, especially if you have a buddy to play with.

You can purchase Samurai Riot on Steam here.