A great sequel to a great game. SteamWorld Dig 2 takes what made the original fun and expands on it, adding several new features to keep the experience fresh while still maintaining the charm of the original. There is more than enough content this time around, even if the difficulty and combat may be lacking. 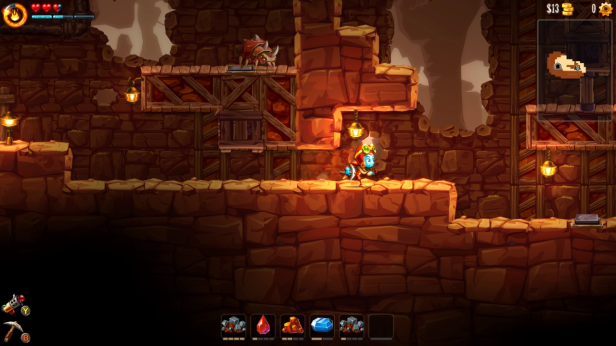 Great sense of progression. I absolutely love the progression in this game. The leveling, upgrades/mods, and the overall pacing is very well done. The new cog system for mods is easily one of the best changes the sequel has made. Being able to add and remove mods so easily allows plenty of room for experimentation. Don’t like a certain mod? Remove it and put those cogs towards some other mod instead. There are numerous upgrades and mods to try out, so much that I barely had half of them by the time I beat the game.

Overall, the progression was great. Coming back up from the mine to purchase a new upgrade or use a new mod was always an exciting experience. I found myself looking forward to what could possibly be unlocked next, as some of the mods are quite creative.

A larger, livelier world. The world this time around is much, much larger than that of the first game. Not only are there now numerous mines to explore, but there is simply more life to the world. More people to talk to, more secrets to discover, and more diversity overall. The pneumatic tube system, allowing the player to jump between various points on the map, was an excellent addition as well. It made the world a lot easier to explore and kept the game from getting repetitive.

Plenty of content for completionists. It took me just under five hours to beat the game, but I had only discovered 40% of the game’s secrets (for which I earned a bronze star). I could easily get another 5-10 hours out of this game just trying to find all the secrets and getting all the unlocks. There is a plethora of content to explore and I did not even get through half of it in one playthrough. After beating the game, I was still able to go back into that save and do what I want, no restart required. A nice feature, especially if one just wants to 100% the game without restarting.

A bit on the easy side, even with handicaps. While the sequel is a tad harder than the original, I still found myself flying through the game without issue. I was playing on the game’s “normal” difficulty (it is either that or easy) and even took some of the in-game upgrades to make the experience harder (like enemies doing double damage) and, while these changes to the base difficulty are noticeable, it still was a rather easy experience. I only really had difficulty with a couple of the different enemy types (like the bird things, which I just ran away from).

The combat. Also an issue with the first game, the combat in SteamWorld Dig 2 is shallow compared to the rest of the game. There are few combat upgrades compared to the amount of total upgrades available and a lot of them are on the pickaxe, which is difficult to use on a lot of the enemies found later in the game. The pressure bomb was good for taking out enemies at a short range, but that can only be used so many times before recharging. There are some upgrades to other tools, like the jet engine, which has a ramming upgrade. A cool upgrade, but really only useful against bats and other enemies in the air. I just wish that the combat had more diversity outside of just slapping enemies with the pickaxe or shooting them from afar. 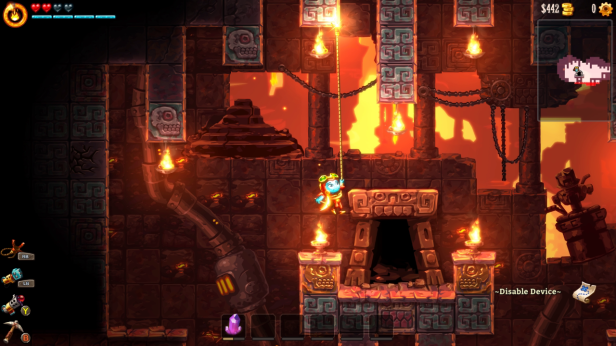 SteamWorld Dig 2 is a fantastic sequel, improving on the original in just about every aspect. A great sense of progression, a larger world to explore, and the amount of content available is just fantastic. While the difficulty and combat may be lacking, I can definitely say I recommend this game.

You can buy SteamWorld Dig 2 on Steam here.