The mega popular Project DIVA series has finally made its debut on PC, this time as the definitive edition of Mega Mix, a Switch release from 2020. Can’t say I ever expected to see this one on PC, so this was definitely a pleasant surprise.

Alright, so if you are unfamiliar with the Project DIVA series, it basically plays like any traditional arcade rhythm game. You get a bunch of songs you can choose from and the gameplay consists of you hitting buttons in time with the music as determined by the map and difficulty level. Lower difficulties will be slower and have less notes to hit, whereas higher difficulties will have way more to hit and a bunch of combination inputs and holds.

The difficulty here is kinda all over the place. You get some really easy ones, but then play another song around the same difficulty level and it’s suddenly way, way harder. And I don’t know if it is just me, but I felt like the harder songs liked to backload their difficulty, dumping the insane button combinations and patterns towards the end of the song just to spite me.

That said, practice does make perfect and I quickly found myself progressing through normal maps, and then hard maps, and then some extreme maps too. There is another difficulty, extra extreme, but I’d be lying if I said I could consistently clear those. The variety offered up by these different difficulties and how they are mapped is really where the game shines – there are a LOT of maps to play through when you consider that each song has all of these difficulty levels.

In fact, the base game itself has over 170 such songs from all sorts of genres. Rock, pop, electronic, everything in-between and from multiple vocaloids too. It was fun to hop in after not having played a Project DIVA game for so long and see all of these old classics mixed in with some new bops and I’d be lying if I said I wasn’t adding to my Spotify playlist as I played through songs here.

It gets even better if you get the extra DLC on top of that, which adds another 72 songs bringing the total to 250 – a beefy selection for any modern rhythm game. Although a word for those that purchase the VIP edition of the game which comes with this DLC – it also comes with an “item unlock key” which effectively unlocks every costume, hairstyle, and accessory in the game right from the start. This is enabled by default and you have to manually disable it within Steam before opening the game if you don’t want it.

If you enjoy playing the game and unlocking stuff along the way, I recommend doing just that, because otherwise it removes the incentive to earn points to unlock these items – which I know is important to some players.

And speaking of those items – Mega Mix’s customization mode is VAST. As in, it takes forever to scroll through all of the costume options, hair styles, and accessories available. There is a literal mountain of stuff to choose from and even a custom T-shirt editor if you want to add your own design. Honestly, a lot of the fun here is setting up custom costumes per track, whether that be random, themed, or matching to the track itself. It’s some good stuff and although it doesn’t really serve a purpose outside of aesthetics, it is fun to play around with.

My biggest complaint, oddly enough, would be the lack of content. No, not the lack of songs, but the lack of anything really outside of that. You get the different songs to play, a customization mode, and… that’s it. While the Switch version had Mix Mode and Touch Mode, the PC version has no other bonus game modes, no mini games, just the same rhythm gameplay all the way through, with the only other real addition being the ability to create playlists and seamlessly play through whatever songs you throw in there.

This may not even be a problem for most, but I kinda like it when such games throw in a little something extra. Like DJMax Respect’s mission mode or literally any of osu!’s other game modes. Still, this doesn’t detract from the base gameplay – which is already absolutely solid – it’s just something that the game would have benefited from in making longer sessions more viable. As it stands, it’s more of a “play for an hour at a time” kind of game for me.

On the technical front, the game is almost flawless. While I did not have any crashes, freezing, or really any bugs, I was a bit disappointed to see the 60 fps lock. Granted, I just as quickly found out that users have already created a high refresh rate mod and it works perfectly without any downsides – at least, that I have noticed. So after installing that, absolutely no issues. 4k 144fps, no drops, stutters, anything. The graphical options are a bit limited at just image quality, anti-aliasing, shadow quality, and reflection quality, but this is not really the type of game that needs more than that. 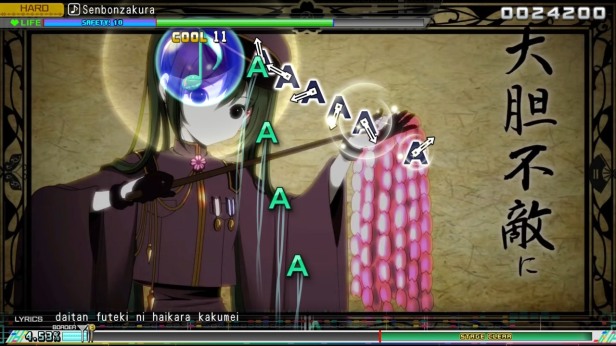 Controls can be customized on both controller and keyboard and mouse and the game has a handful of different button icons to choose from on top of that. There are also some nice bonuses there, such as optional bindings for complex combination inputs, multi-press assist options, and even arcade controller support.

And since I mentioned mods, yes – there is more than just the high refresh rate one. Users have already created some UI tweaks, custom skins, and even custom song packs. I can only imagine that this will grow with time given how easy it is to mod the game and I am excited to see what people make for it.

I also tested the game on the Steam Deck and had no issues there – it’s definitely one I’ll probably end up spending more time playing on the Deck than on my desktop.

Hatsune Miku: Project DIVA Mega Mix+ is an easy recommendation for both vocaloid and rhythm game fans alike. Solid gameplay, tons of content and customization options, top-tier vocaloid music – it’s easily the best rhythm game to come out in a while and I can definitely see it becoming a regular play for me, especially on the Steam Deck.

Quote: Hatsune Miku: Project DIVA Mega Mix+ is an easy recommendation for both vocaloid and rhythm game fans alike, with solid gameplay, tons of content and customization options, and some top-tier music too.

Hatsune Miku: Project DIVA Mega Mix+ retails for $40 USD on Steam, but you can get an official Steam key for 10% off using my Gamesplanet partner link.