Nearly twenty years ago, I had this fun little Gameboy game called Pac-Man Collection. It was a bundle of four different Pac-Man games that allowed someone like myself – who didn’t get to really experience the arcade era – a chance to get into the Pac-Man series proper. Now here we are in 2022 with an exponentially better version of that game.

Alright, so what do I even say about this one? Basically, it’s a collection of a bunch of different Pac-Man games all rolled into one nice package and with this cool “arcade” customization feature thrown on top of it. As you play more games, you unlock tokens which you can use to play other games as well as roll in a gashapon machine to unlock statues that you can then use to deck out your arcade.

Each game has a bunch of different “missions” to complete and these too unlock more cosmetic things to place, whether that be flags, figures, benches, tables, or even new wallpapers. The missions are simple enough, stuff like “reach x score” or “play game x amount of times”, but offer a nice little bonus to have on top of just playing the games themselves. 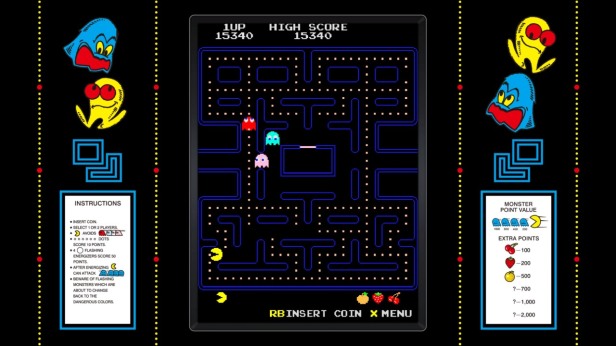 Overall, the whole arcade customization thing is kinda basic, but it’s a fun enough distraction and definitely a better alternative than just a menu listing the different games you can play. And even if you do just want the latter, you can simply press a button at any time while in the arcade to do just that, bringing up a menu where you can quickly hop into whatever game.

And on the topic of those games, there are definitely a lot of them. That Gameboy game I mentioned earlier? It has just four Pac-Man games. This collection? It has fourteen, including everything from the original 1980 arcade game to lesser-known ones like the 2005 DS game Pac ‘n Roll or the 1995 SNES game Pac-In-Time. Most of the games take up the traditional Pac-Man style gameplay, but those two examples, along with others, offer up a bit more variety – mostly in the way of platforming. 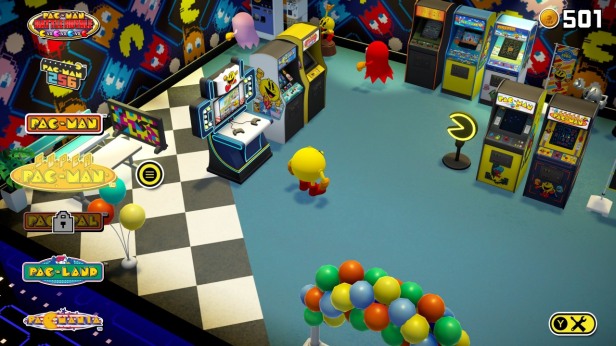 Not to say that they are all good though – I wasn’t really a fan of Pac-In-Time and Pac-Man Battle Royale is pretty much the worst thing ever if you don’t have others to play it with. It’s mostly balanced out though – a bit of good, a bit of bad, a lot of just okay. My personal favorite was probably Championship Edition.

That said, the collection is missing a few key Pac-Man games I would have liked to see. The major one of course being Ms. Pac-Man, although that is likely because the game was not developed by Namco directly. But then you’re missing stuff like Championship Edition 2, which is very surprising seeing as how the first one is included and Championship Edition 2 is perhaps the most definitive Pac-Man experience yet and would have likely been my favorite game in the pack if it were included.

And while they included Pac-Land and Pac-In-Time, they did not include the also obscure Pac-Man 2: The New Adventures, which was released roughly around the same time. There are others of course – the Pac-Man World series definitely deserves its own collection – but overall, it’s a solid collection and covers a lot of Pac-Man’s history. In fact, it is by far the most definitive collection of Pac-Man games yet and I would have no trouble calling it the best.

But yeah, that’s pretty much all there is to say about this one. There are other neat additions, like online leaderboards, but I myself am not good enough for those to matter to me personally. The collection plays well, runs just fine, looks great at 4k, and has just enough customization to make it more than just another collection of Pac-Man games. That and it even works right out of the box on the Steam Deck – where I had fun jumping from game to game.

So yes, PAC-MAN MUSEUM+ a pretty easy recommendation to make, not just for Pac-Man fans, but for fans of retro gaming in general. It’s got a fun batch of games to play through, some nice bonus features by way of leaderboards and arcade customization, and I am honestly struggling to find anything negative to say here – it’s just an all-around solid release and a great way to get into one of the medium’s most important series.

Quote: PAC-MAN MUSEUM+ an easy recommendation to make, not just for Pac-Man fans, but for fans of retro gaming in general and a great way to get into one of the medium’s most important most important series.

PAC-MAN MUSEUM+ retails for $20 USD on Steam, but you can get an official Steam key for 10% off using my Gamesplanet partner link. It is also available on PS4, Xbox One, and Switch.