Nearly 11 years later, Phantom Breaker makes a proper appearance in the west – this time in the form of Omnia, an upgraded, updated, and revamped version of the original 2011 Xbox 360 game.

Okay, let’s start with the actual fighting. It’s a bit of a mixed bag unfortunately. Right off the bat, I wasn’t the biggest fan of how floaty and slow it felt. Maybe it’s because I am so used to games like Guilty Gear, BlazBlue, and Tekken, but everything here just felt off. Jumping is a bit too stiff, there’s limited mobility while in the air, and a lot of the moves lack that sense of impact – that weight behind them.

What kinda elevates it is the bit of depth introduced through stuff like fighting styles, emergency mode, evades, and the numerous special moves that you can activate by combining a certain input with a regular move. Once I got the hang of this stuff, I was stringing together combos with ease and that felt good – but that again introduces another key point: auto combos.

I don’t know if it is just the audience this game is going for, but every fighting style has at least some form of basic auto combo – usually achieved by just spamming one of the three attack buttons. This is not something you can disable and while some styles have more auto combos than others, all of them reinforce this “streamlined” feeling, which is kind of at odds with the more advanced mechanics I listed before.

This is further reinforced by the fact that each character has the same command list, just different moves resulting from those inputs. This makes the core to game easy to learn – which can be good – but when that core is as slow and floaty as it is, it doesn’t quite feel right. Compare this to BlazBlue: Cross Tag Battle for example. That one also streamlined its controls and was more beginner-friendly, but had the movement, the mechanics, and the speed to make higher levels of play possible (and definitely entertaining to watch).

Or maybe I’m completely wrong here and I just have not unlocked the potential behind this one and with time, other players will demonstrate that. But as it stands, this feels more like a casual fighting game to pick up and play at maybe a party and just have fun messing around with friends. That’s not even a bad thing – it’s just something to keep in mind before picking the game up.

But enough about the fighting – let’s talk characters. This game has 20 unique ones and they offer up a good amount of variety. Speedy types, power types, ranged types, technical types – combined with the three different fighting styles and you’ve got quite the selection. I sampled them all and, while there were a few that I just straight-up did not like playing as, most felt fine and I eventually gravitated towards a select few that I really liked.

Design-wise they’re also pretty good and the style reminded me a lot of Under Night In-Birth. That said, I was not a fan of the mixed 2D and 3D characters. I have no idea how that came about, but having a 2D character fighting this 2D, yet 3D CG looking thing was really off putting.

The backgrounds are fine too, but I can’t say any of them really stuck with me – another area of the game that came across as average. The music was a bit better, but this is definitely no BlazBlue, so perhaps not something I’ll listen to much outside of the game. 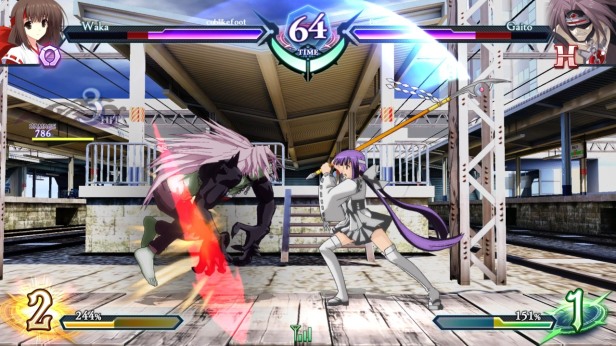 Perhaps the biggest problem a lot are going to find with Phantom Breaker though is its multiplayer – and for two reasons. One being that this game is releasing right around a couple other notably bigger fighting games – King of Fighters 15 and Persona 4 Arena Ultimax – and will likely lose a lot of audience to those. And 2 being that there is no rollback netcode here.

I’m not some rollback elitist, but for a niche fighting game like this launching in a crowded space, the devs are really shooting themselves in the foot with the potential multiplayer reach. I fully expect there to be maybe a few hundred players for the weeks following launch and then this game just completely dropping off the radar and becoming something you’ll need to make arrangements with another player to actually play online.

That’s exactly how I had to play it before posting this review by the way – duking it out with my one other friend that owned the game – although it might just be because the game’s matchmaking is not live yet or maybe no other reviewer is trying to test the online (believe me, I tried finding a match multiple times spread across days). And to the game’s credit – the matches I did play with that friend were smooth for the most part – only a few hiccups. Granted, we’re also in the same country and on wired connections, so that probably helps too.

Whatever the case, if you are not in it for the multiplayer, there is at least a decent chunk of singleplayer stuff. A story mode for each character, your classic arcade mode, score attack, time attack, endless battle – yeah they’re all practically the same gameplay-wise, but at least the options are there. If you’re wondering about the quality of the story – sorry to say but don’t expect much there. You get your little visual novel segments in-between fights and it’s the most basic thing ever and barely held my interest.

Outside of that though, there’s also a records mode to show play data and such, a game reference to explain all of the controls and mechanics, and of course, a training mode. One immediate improvement to be made there though is the ability to access the game reference while in training mode because as it stands, you have to completely exit to the main menu if you want to view the command list or explanation on any of the mechanics – no idea how that one was left out.

On the technical front the game is also a mixed bag. The 1080p lock was unfortunate to see as someone with a 1440p monitor – I ended up having to stretch the game to maximize it. The framerate was solid throughout, but I did run into a few crashes. I think it might be some sort of bug with the main menu because all three happened there and only after idling for a little bit – so nothing affecting the gameplay at least. 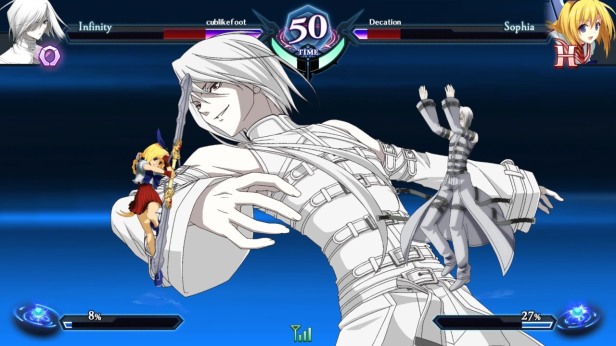 Phantom Breaker: Omnia is just okay. The fighting has some depth to it, but feels overly simplistic and floaty. There’s a good amount of singleplayer stuff, but no rollback netcode for multiplayer and this is the type of game that is probably going to struggle with maintaining a playerbase on top of that. Maybe I’ll be proven wrong and there’s a lot of hidden potential behind this one, but having played it for some time now – I can’t say it’s one I’ll be coming back to.

Quote: Phantom Breaker: Omnia is just okay. The fighting has some depth to it, but feels overly simplistic and floaty. There’s a good amount of singleplayer stuff, but no rollback netcode for multiplayer.

Phantom Breaker: Omnia retails for $40 USD on Steam. It is also available on PS4, Xbox One, and Switch.