It took almost an entire year, but us PC players finally have the chance to play Monster Hunter Rise in full HD and above 30 fps. I have talked about this game quite a few times, so it’s about time I actually review the game.

Okay, let’s start with the gameplay. Monster Hunter is a series with perhaps one of the most defined game loops in the genre and Rise is no exception. You get your hub world where you tend to all your equipment and side stuff and then leave this hub world to go on quests that 90% of the time have you taking down a large monster. This monster drops materials which then help you craft even better equipment and repeating this cycle is basically the Monster Hunter experience.

It sounds simple when boiled down like that, but there is a LOT going on here. For one, Rise has some seriously in-depth gameplay customization. Just take the weapon types for example. There are 14 of them and they cover a wide variety of play styles. Want to play the most basic? Pick up the long sword. Want to play heavy defense? Take up the lance. Want a mix of both? There’s the sword and shield. Want ranged? There’s the bow and bowgun. Want something completely unique? Try the hunting horn or insect glaive (my personal two favorites). 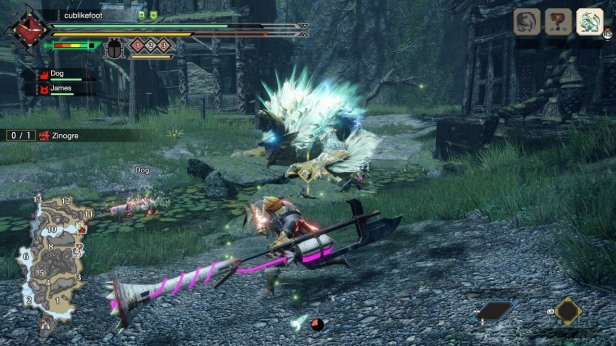 Each of these weapons has an entire upgrade tree to go down that results in over 18 different final forms, making for hundreds of potential options to choose from. It is very overwhelming as a newcomer, but the sheer depth of customization here is admirable – there’s always something new to try or something cool to craft. And it’s not just weapons either. You get full armor sets, charms, switch skills, meals, and an entire buddy system that has its own skills and equipment tree and can also gather materials for you while you’re off hunting monsters.

Again, it’s a lot for newcomers and the tutorial popups are really not all that helpful in fully unlocking the potential behind all of these mechanics. It took hours of trial and error for me to get used to how everything worked and once you get going, the new mechanics are introduced at a rate that do not overwhelm you as much as the very start of the game. If anything, video guides on YouTube were more helpful than the in-game blocks of text, especially when it was on how to actually use a weapon properly – which the game does not help you with in the slightest. 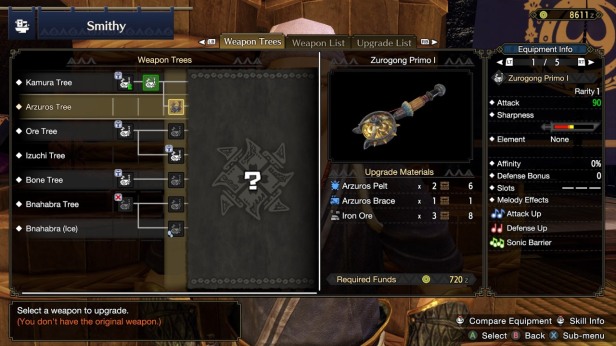 Anyways, all of that customization would be put to waste if the combat wasn’t good, but that is not the case here. It’s one of those games where you really feel the weightiness behind it all – landing those huge attacks, getting absolutely clapped by a monster 20x your size, or your dull blade bouncing off of a monster’s tough skin. You really get to “feel it” in a way and I found myself getting very involved just like I did with Nioh 2 last year, yelling out when getting hit or leaning into the screen when landing some mega combo. There’s a lot of little things that go into it, but the overall package is some fun stuff.

To name one though: the wirebug. This is a new addition in Rise and it basically acts as a grappling hook of sorts, allowing you to scale walls and monsters, fly through the air, and it even combines with most weapons to deliver unique attacks. It makes the experience more mobile, more versatile, and less clunky and is an overall solid upgrade to the base Monster Hunter norm. 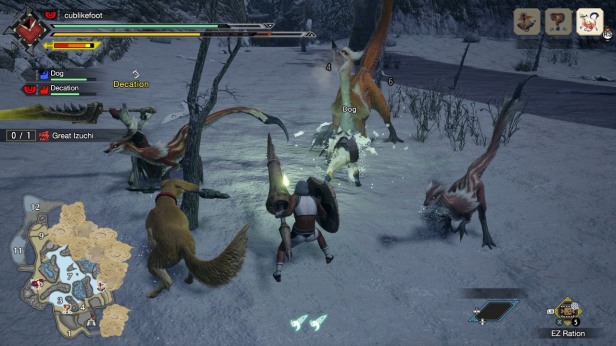 And yes, the combat is challenging too. Maybe not so much early on, but once you get into the later hub quests, it becomes way more important to know a monster’s attack patterns, what body parts take the most damage, and what elemental trait is most effective against it. I went from “this game is a bit too easy” when doing the village quests to “wow I did not think that would one-shot me” when doing the upper tier hub quests. Despite this, it never felt outright unfair. Attacks are usually telegraphed pretty well and the hitboxes are actually good.

My main complaint is more so with the overall mission design. It was a lot of fun going on hunts, discovering a new monster, figuring out its quirks, and then taking it down. As you get later into the game though, this slows down a lot and the quests will have you hunting the same monster repeatedly, just with better stats and – in a high rank quest – an upgraded moveset. On one hand, yeah it’s cool that the monsters get better moves later on, but I want to see more unique monsters entirely, not just the same thing but better. 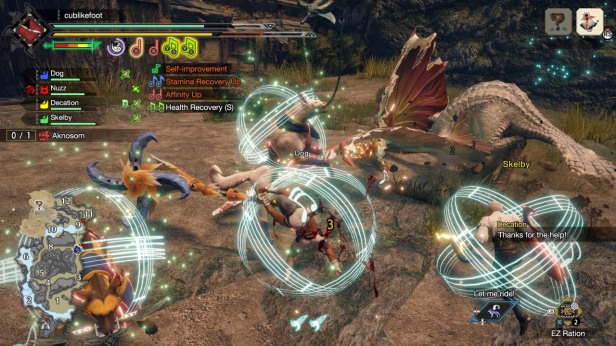 This really comes down to how much you can handle repetition. There’s no doubt that Monster Hunter Rise is a repetitive game, but it usually does not feel that way given all the unique monsters, weapons, and other mechanics on top of that. It’s only once the quests started repeating, having me hunt multiple of the same type of monster, or generally just being a slight change from an earlier quest that it felt like the experience was being padded a bit.

This is perhaps no better demonstrated than in the new rampage mode. On the surface, it looks like a cool tower defense take on the classic Monster Hunter formula, but in practice, it quickly became my least favorite type of quest due to how long they drag out. They are split into multiple waves and at some point will throw an “apex monster” at you, which is basically a normal large monster, but with a godly amount of HP and a whole set of one-shot moves. Worst part: they don’t even have unique equipment to craft after the fact.

I was also not the biggest fan of the environments. There are just five of them total – some bigger than others, but all of which have a muted color palette that doesn’t really let any stand above the rest. They all blend together and it becomes a bit boring to run through the same map for the 10th, 50th, or even 100th time. 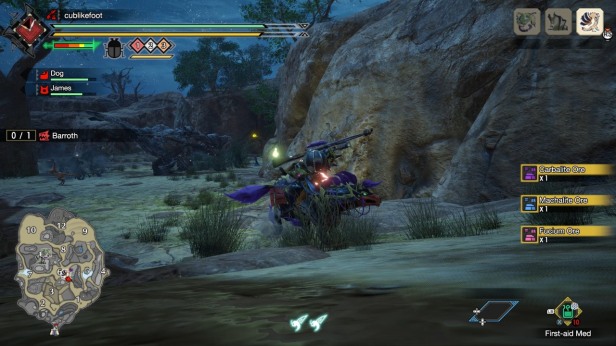 And this is not helped by the setting either. The lack of any meaningful story beyond the surface level is fine – I mean, this is Monster Hunter after all – but there isn’t really anything to get you invested into the world, characters, lore, or really anything outside of just the gameplay. The most you get are relic records and old messages, which are collectibles found on each map, but nothing of substance beyond that. Some might not be bothered by this aspect of the game, but I found it to be a bit disappointing.

That said, it doesn’t detract from the gameplay. I still had a lot of fun going through the quests and testing out new weapons in singleplayer, taking down huge monsters with my friends in multiplayer, and really just figuring out how all of these different mechanics fit together to best min-max my loadout.

Okay, so with that out of the way – I gotta talk about the port. Because yes, this is the definitive version of the game now – at least, technically – but it does not come without some issues. For one, this is still a game that was developed for the Switch first and it absolutely shows in several areas. Pixelated textures, jagged character models, flat foliage, a 30 fps main menu, blurry cutscenes, and texture pop-in are just a few of the things I noticed. 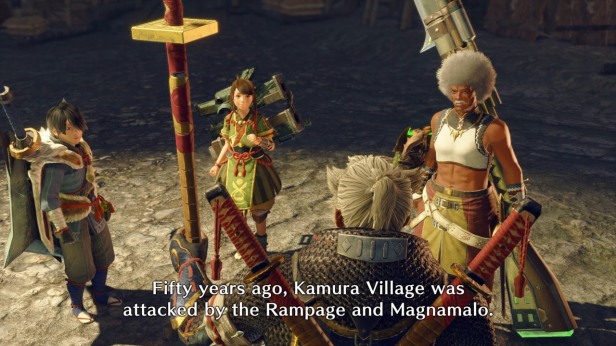 So while it may still look better than the Switch version, I wouldn’t say it’s graphics are any better than say a recent PS4 release. Performance, on the other hand, is where it gets really good. I have dumped dozens of hours into this game and never had issues with framerate or stability outside of one crash when entering a multiplayer quest. Other than that I ran the game flawlessly at 1440p and 155 fps without anything in the way of drops or stutters – it was a buttery smooth experience all the way through.

The PC port also comes with a ton of graphical settings to change, including render scaling, texture options, multiple shadow options, anti-aliasing, variable rate shading, and some bonus graphical filters too. That last one may not really seem necessary, but it can make for some cool screenshots. One downside here is that the advanced settings are not accessible until you are in-game and only after you have access to the options menu after completing the tutorial. A bit of a pain, but not a problem after that point.

Control-wise the game is also solid. Most of my playtime was with an Xbox Series X controller, but the default keyboard and mouse layout is actually pretty good. It’s intuitive, has plenty of shortcuts so you can get to your gear quickly, and I would have no problems recommending that layout for those that don’t want to go the controller route. 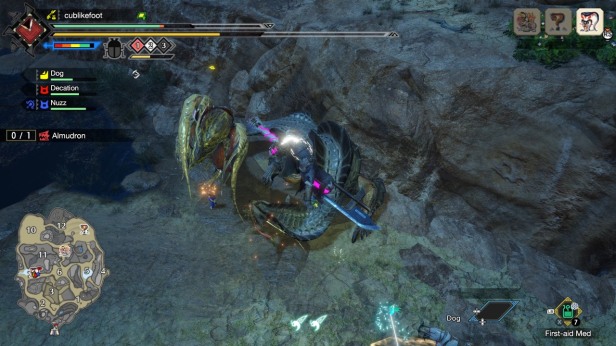 A solid game and a solid PC port, Monster Hunter Rise is an all-around fun action RPG with a very defined game loop and a mountain of stuff to customize. The combat is satisfying, there’s a ton of different weapons to try out, and the addition of new features like the wirebug offer up some nice quality of life changes too. That said, the learning curve is steep and I wasn’t the biggest fan of the rampage mode or the immense repetition later on. I had fun with it though and would recommend it to those into the genre, even if you’re new to the Monster Hunter series.

Quote: Monster Hunter Rise is an all-around fun action RPG with a very defined game loop, a mountain of stuff to customize, and a solid PC port now a year after its original release on the Switch.