Right as I finish up Olympia Soirée and we already got another big otome release from the same studio, albeit with a drastically different theme.

Alright, let’s start with the setting – since this game really nails it. Cupid Parasite takes place in the fictionalized city of Los York, which, yes, means that the game is actually set in America instead of Japan (not that the characters speak English though). The setting plays heavily into the story, with this overall “Hollywood romantic movie” theme – and honestly, it works really well for an otome storyline.

You get the game’s version of some trashy American reality TV show, a plot structure that follows the typical highs and lows of a big budget Hollywood film, and – as if that wasn’t enough – this whole other story layer based in Roman mythology. It’s a bit ridiculous at times, but it’s not really one of those romance stories where logic applies and sometimes that’s just the kind of romance I want to read.

You play as Cupid taking on a human identity and trying to prove to her father, Mars, that humans don’t need the gods meddling in their love affairs. To do this, she works as a bridal advisor at matchmaking agency Cupid Corporation, where she is then tasked with finding matches for the infamous Parasite 5 – five guys that are so difficult to match that every other advisor has given up on them.

Of course, these are the guys that ultimately form your different character routes. You’ve got the shy, yet extremely loyal writer that is lost in his own one-sided love, the fashion designer that seems more interested in his work than what goes on around him, the movie star that is weirdly addicted to Greek and Roman mythology, the womanizer that is only interested in ladies that are already in a relationship, and the company CEO that values his status above all else. 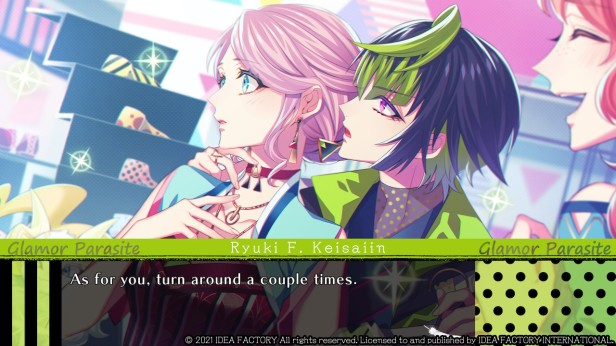 They’re all interesting in their own right, but my favorites ended up being Gill and Shelby. Gill’s route in particular is a great place to start – it hits all the highs you would expect from a Hollywood romcom, but blending the elements unique to Cupid Parasite (the mythology, the matchmaking) all into this one nice package. The only character I outright disliked was Raul, the movie star. His character quirk just came off as annoying to me, even if it does get explained in his route.

There’s also a secret character unlocked after clearing the five main routes, but I won’t dive into that for spoiler reasons. I will say though, that secret route is quite unlike any of the other ones here – and definitely not in a bad way. The entire thing takes around 40 hours to clear, but that will of course depend on your reading speed.

As for the actual writing to back up these routes – it has its pros and cons. The pacing is generally pretty fast across the board, which is good in that it lets you get right into the good stuff, but bad in that conflicts that do arise are resolved before they’ve been given proper exploration and it can come across as rushed. That and the story does use the occasional cheap trope or two to throw in some quick drama. One route, for example, has the entire last third or so hinge entirely on a simple misunderstanding that could be explained in just a couple sentences.

Granted, this kinda falls perfectly in line with the Hollywood romance movie theme – so I guess that just comes with its own pros and cons too. And while the story may get serious at times, it never really escapes that “bright and colorful romcom” feel – and that’s not even a bad thing. I just played Olympia Soirée, which dealt with some pretty heavy topics, so it was nice to just sit back and play through something that is just over the top and fun for the sake of it.

And I haven’t even mentioned the art and music – easily some of the best I’ve seen from ANY visual novel recently. It’s like a color explosion, with these super vivid character designs, background art that is all sorts of… things at once, and an overall aesthetic that just oozes style. The music too. Been a while since a VN opened with a backing track that just grabbed me right from the start – but Cupid Parasite did just that.

As for the translation – it is mostly fine. I say that because for some odd reason, the publisher failed to include the properly edited versions of two of the character routes – Ryuki and Raul. Both routes have numerous grammar issues and typos, but the publisher released a statement clarifying that this was a mistake and will be fixed approximately four weeks from release. A bit odd that they didn’t catch it before, but at least they’re being transparent and patching it up.

Otherwise, the release is solid. The settings page has all the usuals you would need, the addition of controller rumble support was nice to have, and, while the UI takes some getting used to, I really liked its style. That said, the game can be a bit slow to load new scenes when you’re skipping around (trying to hunt down missing CGs and such) – a bit disappointing, but kinda expected on the Switch.

Regardless, Cupid Parasite is still well-deserving of a recommendation. Whether you’re an otome fan or not, the story here is some really fun stuff – going from over-the-top romcom to drama with mythological undertones. I enjoyed getting to know each of the characters and really just getting into the super-vibrant setting, it is very unique for a VN and worth a look for just that alone. It may have its hiccups, but it is easily the best otome I’ve played this year.

Quote: Whether you’re an otome fan or not, Cupid Parasite is some really fun stuff. Great characters, super vibrant setting, interesting story twists – it is easily the best otome I played this year.

Cupid Parasite retails for $50 USD on the Switch eShop.