So what would happen if you took SMEE – a studio generally known for their over-the-top romantic comedies grounded in reality – and tasked them with making an isekai harem game? Well, we get something a bit interesting.

Within the visual novel medium, I can’t say I’ve actually seen too many isekai (basically “transported to another world”) visual novels. I mean, we get a ton of anime and novels based in that genre, so it’s honestly a bit surprising that this is only like the second VN I’ve played with that base. HaremKingdom starts off in the real world, but you’re quickly thrown into this fantasy realm, along with your childhood friend, and just as quickly crowned king of an entire kingdom.

The “harem” part of the title comes from the fact that – in order to maintain his own life and not disappear from this new world – our protagonist must build a harem and maintain constant emotional AND physical contact with each of its members. This is all thrown on you early on – the story wastes no time in setting itself up and getting you introduced to all of its characters. 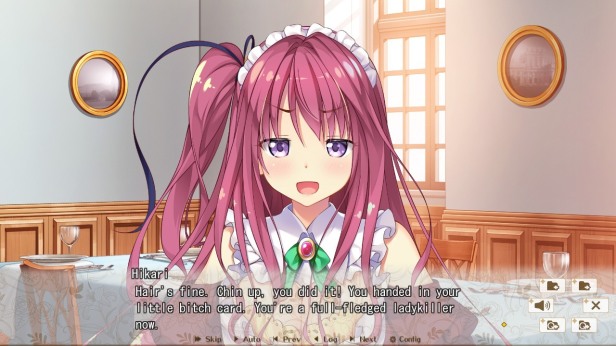 In fact, this fast pacing is something the game never really lets up, even into its character routes. You’re thrown from scenario to scenario with very little drama or other gimmicks to drag down the experience. It is a no-nonsense harem story all the way through and what little drama that is introduced is resolved just as quickly.

I liked how refreshing it was to get right into the meat of the story without an overly long buildup, but it does come at the cost of some character development and worldbuilding. In fact, for being an isekai story, the whole “fantasy” setting is hardly explored beyond surface-level concepts like “oh, there’s magic”.

A bit disappointing, but this is kinda expected coming from SMEE. They don’t really do settings outside of reality and generally don’t do the whole “serious” story thing, instead focusing way more on the comedy and characters.

And yes, this expertise can be seen in HaremKingdom. Right from the start, you are bombarded with the studio’s signature over the top comedic writing. Exaggerated character quirks, absurd plot developments, and even text that shapes itself to the tune of the game’s own jokes. It’s all there and, what normally would just not work in other VNs, manages to work so well here simply because the game does not take itself seriously.

The studio basically slaps down a stupid, yet entertaining plot to work with and builds up this character-based comedy on top of it. It’s funny, it’s stupid, and at the end of the day – it’s one of the more engaging comedy VNs I’ve played recently, kinda reminiscent of how much fun I had with Fureraba, one of the studio’s earlier works.

All of that said though – this one differs from their past works in that it has a much heavier 18+ focus. Like, the whole “must maintain physical contact with members of the harem” thing is seen in full force here through various H-scenes. The Steam version comes unpatched, but there is a free patch to add back in these scenes and yeah, there’s a good bit of them – like almost every in-game night. They’re not necessary for the story (and the scenes themselves are shorter than the usual for the genre), but they are there for those that want the full experience. Granted, even if you play the unpatched version, a lot of the jokes and such will still reference these scenes.

Structurally, the game follows a more traditional VN romcom setup. Each heroine is given her own route, but they only feel slightly different than the common route. The harem thing is still a major focus and the only thing the character routes change are a bit of backstory for said character and more H-scenes. Otherwise, it’s pretty much the same feeling as the common route: a bunch of random character events loosely linked together with comedy as the main focus.

The common route was my favorite part of the game, so this seemed great on paper, but it also means that the story doesn’t spend as much time fleshing out the characters. It’s disappointing, but I also understand that that is not really the point of this game. The comedy and slice of life stuff is the main player here and that is what it does well – putting the usual character development and serious plotlines on the backburner. It’s for that reason that I recommend you go into this one with the right expectations, it is definitely NOT a game that is going to earn marks for how unique or thoughtful its story is.

And despite my complaints, I didn’t outright dislike any of the characters. They each fit their specific archetype sure, but they’re all enjoyable in their own way. The childhood friend that is extremely open with the protagonist, the princess that is a bit naïve, yet fun to be around, the former slave that is trying to overcome her shyness, the smart, yet manipulative noble girl, and the reliable, hardworking premiere that helps the protagonist run the government.

It was tough deciding which route to go down first and even after completing the game (about 20 hours long), I honestly cannot tell you who my favorite character was – it’s like a three-way tie between Hikari, Kiki, and Marrou. Hikari probably has the most interesting backstory (even if it wasn’t all that developed), but Kiki is one of my favorite character types and Marrou is a bit of both.

Then there’s the protagonist. He is just… okay. It’s one of those renamable protagonists and that is usually a red flag for a self-insert type, and while that’s not too far off a description, he does at least have some personality. Great comedic timing if anything, but again, his backstory is just as basic as the rest of the cast even if the story does try to throw in an interesting twist or two there.

As for graphics and music – the game is also fine there. The character designs are not too far off from the typical SMEE visual novel, but they don’t really need to be. The studio constantly puts out solid character designs and this one is no exception. There’s also a decent amount of animation – eye blinking, multiple poses, and even the occasional zoom or cropping to emphasize a joke. My only complaint here would be the boring backgrounds and 720p lock, although that latter one is pretty standard for the medium so not unexpected.

Settings-wise, HaremKingdom has the usuals plus some. You get your text options, screen size, opacity, and all that, but a couple nice extras a lot of other VNs usually skip out on – like splitting the textbox from the gameplay, customizable animation speed, and full font swapping.

Shiravune, the English publisher behind this one, has also done a nice job with the localization. I can’t speak for the actual Japanese to English translation, but I maybe noticed 2-3 typos or grammar issues throughout the entire thing and they did a great job adapting the jokes to work in English. Given the speed at which this publisher has been releasing these English translations, it’s honestly impressive. 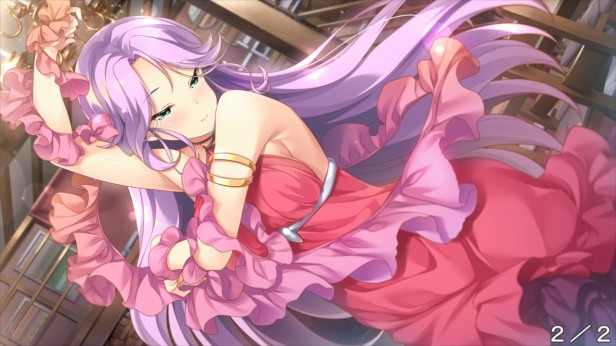 For being a bit different from the usual SMEE visual novel, HaremKingdom still maintains what makes their visual novels enjoyable. Great comedy, fun characters, lighthearted romance – it’s a nice all-around package even if the story may not be anything beyond that comedy and slice of life stuff. If you’re looking for a short, yet fun comedy VN that gets right to the point – this is one to look out for. If you’re looking for a serious, well-told story, then give it a pass.

HaremKingdom retails for $30 USD on Steam and is also available on Johren. A free 18+ patch is available for the Steam version.