The Jackbox Party Pack is back yet again for its yearly offering. We are now on the eighth iteration and seeing as how 7 was easily one of the best, this one had a lot to live up to. Just as I did with my previous Jackbox Party Pack reviews, I am going to discuss each game individually.

Every pack has to have a drawing game and unfortunately the one in 8 is a bit underwhelming. Drawful Animate has some good ideas – create a simple two-frame animation and pit it against a bunch of possible answers – but the underlying “animate” mechanic just falls flat. A lot of the time, the phrase given can be demonstrated in just one drawing, no animation required.

That and a lot of the prompts are just boring or use super obscure language that even I needed to google to make sure I knew what I was drawing. It can be fun at times with the right group, but honestly, you’re probably better off just playing Gartic Phone, which has a much better animation game mode. This one just felt like Drawful with an unnecessary extra step – a waste of a game for a new Party Pack.

The Wheel of Enormous Proportions

This is yet another game where the idea is great, but the execution just does not do it. You’re basically tasked with solving trivia and spinning a wheel in hopes that your score can get up to 20k. Problem here is that both the trivia and wheel spinning are just straight RNG. It does not even matter if you know the trivia or not, a lot of the time you can simply put in whatever answers and get enough points to spin the wheel and even if you are not spinning it yourself – another player is spinning it with the chance of getting you points.

And once you do get to that 20k points, you’re given ANOTHER wheel to spin to determine the winner amongst ALL players with 20k points. The game is effectively RNG layered on top of more RNG and the trivia stuff feels underutilized as a result. It was really disappointing as a fan of trivia games and even though I do like myself some RNG, this one just doesn’t cut it.

And as if to balance out the two duds so far, Job Job comes out of nowhere and cements itself as not only the best game of the pack, but one of the best games in ANY Jackbox Party Pack. The game revolves around answering questions about a potential job and using other players’ own words to compose entirely new sentences. The result is often chaotic, deadpan, or just straight-up hilarious. Depending on the group, the prompts can bring out some really interesting answers to work with and the fact that you can pull words from the questions themselves is a cool bonus too.

It’s simple concepts like these that Jackbox Party Packs really excel at and it’s perhaps the most accessible in the pack too, anybody can hop in and understand what to do without needing a big tutorial beforehand. It is for this game alone that I will likely keep the Party Pack installed for. 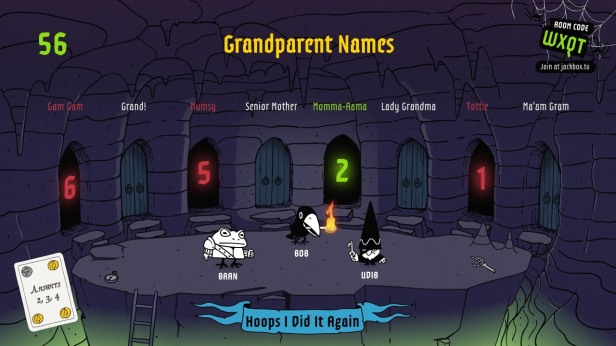 This one is a step up in complexity, but it’s got a really neat concept. You play in teams and your goal is basically to guess the group consensus on certain questions and rank the different answers provided. Depending on the stage though, you might be guessing what the top three most popular choices are, the 2-4th most popular choices, or guessing them all from least popular to most – earning torches for each right guess and losing one for each wrong one.

The team focus adds another layer to it, as you want to discuss with your team what the right answer may be, but doing so in a way that doesn’t give enough info away to the other team to use if your team gets it wrong – as the other team picks up right where you left off. It’s a neat tug-of-war concept that’s only aided by its absolutely absurd prompts, like “what is a smell you only want to sniff once and never again”. Easily the second-best game in the pack.

I am a bit torn on this one. On one hand, the concept is really neat. You have to draw “weapons” but must include a letter from your name (that the game provides you) so that when you kill a target, other players can attempt to deduce who the murderer was. On the other hand though, that is just one aspect of this game and there are a couple other layers that elevate it beyond the simplicity one would usually expect from a Party Pack title. In fact, it might be the most complex Party Pack game I’ve played.

In a way, this kinda defeats the spirit of the series, as it is not one you can just pop open during a party without expecting at least a few players to be confused and ruin the gameplay for the others. Once you get over that hurdle, it can be fun, but it takes a bit to get there and it doesn’t help that games last a long time. I’d place it as my third favorite in the pack, but I can’t say it’s one I’ll be returning to much.

The Jackbox Party Pack 8 is a bit of a letdown following the release of the excellent Party Pack 7. The overall pack is less consistent, has only one real standout, and is perhaps the weakest in the series yet (I have played from 4 onwards). Job Job may have carried it a bit, but that is likely the only game in the pack that will be getting plays from my group in the future, even if Poll Mine and Weapons Drawn aren’t all that bad.

Quote: Party Pack 8 is a bit of a letdown following the release of the excellent Party Pack 7. The overall pack is less consistent, has only one real standout, and is perhaps the weakest in the series yet.

The Jackbox Party Pack 8 retails for $30 USD on Steam, but you can get an official Steam key for 20% off and support the channel using my Green Man Gaming partner link. It is also available on PS4, PS5, Xbox One, Xbox Series X|S, and Switch.