I love Monkey Ball. I played it a lot as a kid back on the GameCube – so let’s just say I was a bit excited for this remake.

Starting with the base gameplay though – there’s… not much to say here if you’re already familiar with it. You tilt the stage to move your monkey ball around and get it into the goal. A simple setup, but one brought to its absolute limit with the game’s over-the-top level design. Giant speed tunnels, crazy moving platforms, plenty of verticality – the levels are all over the place and it never gets repetitive, even if there’s the occasional stinker or two thrown in there. The original games were some of the best 3D platformers I ever played and it was a lot of fun giving them another shot in Banana Mania.

Difficulty-wise, the game is still one of the hardest platformers I have played. Stages I remember being super difficult long ago are still just as difficult here, but the remake also makes a number of changes to increase accessibility without compromising too much of the challenge. The outdated life system, for example, has been removed and they even added the option to outright skip stages.

There’s also a jump button and a new “helper mode” which doubles the stage time, gives you arrows pointing out the proper path to take, and allows you to slow time. Of course, you can just ignore these additions and play it like a traditional Monkey Ball game as I did, but props to the devs for the options – it’s a great way to get more newcomers on board with this amazing series. I should note though that using this mode does disable leaderboard scoring, but that’s to be expected.

That’s not all the remake does though. It is by far the most content-packed Monkey Ball title and includes not only the stages from 1, 2, and Deluxe, but numerous other game modes. There’s Reverse mode, which has you playing a selection of stages in reverse. Dark Banana mode, which tasks you with completing a selection of stages while AVOIDING bananas instead of picking them up. Golden Banana mode, which REQUIRES you to pick up all the bananas to clear a stage. And of course, Classic mode, which includes 23 stages from the original games in their unaltered, super-difficult form.

All of these were fun to play – Dark Banana mode being a personal favorite – and they add quite a bit of extra stuff to do on top of the already massive collection of base stuff. Story mode, challenge modes, practice modes, ranking challenge – it’s honestly a bit overwhelming and, although the story mode took me just five hours to clear, that is a mere fraction of the time I can see people spending on some of these other modes. Whether that be clearing the mountain of in-game missions or trying to duke it out on the online leaderboards – it’s just a beefy game.

And that’s before you even get into the party games. Supporting 1-4 local players, there are 12 of these minigames, including classics like Monkey Race, Monkey Bowling, and – my personal favorite – Monkey Target. A handful of these even have leaderboard support and I’m already interested in seeing how competitive the Monkey Target board will be in the next week or so.

Aside from all the new modes and such, the remake also adds monkey and ball customization, an in-game point shop to buy new items, and even a photo mode. Can’t say it’s a game I ever expected to benefit from a photo mode, but hey maybe somebody will make some cool stuff with it.

All that said – the change that is likely to be most controversial comes in the form of the game’s physics. As this is a remake – not a remaster – it was built in a new engine and yes, the physics are not a 1:1 identical match to the original games.

I was never a hardcore, speedrunning type Monkey Ball fan, so I honestly didn’t notice the slight changes to the physics, but it’s still something to note for those going in expecting the same shortcuts and such to work – they might require some small adjustments. Then again, this also opens the door to entirely new shortcuts and skips, so that’s something to look forward to as well.

My complaints are more minor – like the lack of online play in party games, the bland music outside of a couple standout tracks, the tacked-on story cutscenes that don’t really add anything, and a couple of the minigames that are not nearly as fun as others. And of course, just as with the originals, you do get the occasional boring or just outright frustrating stage. None of these are enough to really bring down the experience – but it is not a perfect game by any means.

As for the quality of the PC port – Banana Mania does a pretty good job. On my 1070 Ti, I maxed out the settings and played at 1440p 60+ fps without any hiccups. No crashes, no freezing, no major fps drops – it was smooth sailing and the only issue I had was with the game’s VSync option.

When toggled off, it capped my fps to 60, under half of my actual refresh rate. I ended up having to keep it enabled to maintain 144 fps, but even then, the gameplay is seemingly still locked to 60 while the UI and menu elements are not. I’m not 100% sure if this is the case, but there might be some frame doubling going on here with my monitor reporting higher fps than what the game is actually running at.

Controls, on the other hand, are fine. The game plays flawlessly on controller, but the keyboard and mouse support isn’t even that bad. I mean, the controls aren’t all that complex to begin with, so I guess that was expected to an extent. Regardless, full rebinding is available for both options and you’re even able to set up custom controls for individual minigames if you really want to go all-out. I found the default layout to be intuitive enough, but it was nice to have the option. 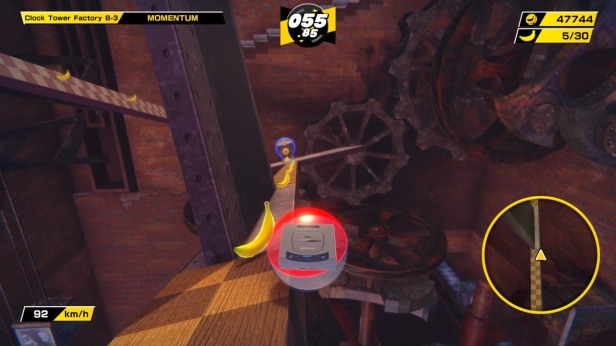 Super Monkey Ball Banana Mania may just be the best platformer of the year. It takes all that I love about the original games and slaps them into a brand new shiny package, with hundreds of levels to complete, a ton of new game modes and quality of life features, and a solid PC port tying it together. It may have some faults – the tacked-on story stuff, the lack of online multiplayer, and the occasional bad level or two – but it’s the best that Monkey Ball has been in literally over a decade and is well worth a play for both fans and newcomers alike. I am already looking forward to what kind of mods we might get on the PC version.

Quote: Banana Mania may just be the best platformer of the year. It takes all that I love about the original games and slaps them into a brand-new shiny package, with tons of new content and improvements.

Super Monkey Ball Banana Mania retails for $30 USD on Steam, but you can get an official Steam key for 10% off and support the channel using my Gamesplanet partner link. This also applies to the Deluxe Edition. It is also available on PS4, PS5, Xbox One, Xbox Series X|S, and Switch.