It was nearly two decades ago that I was holed up on the family PC playing Hot Wheels Stunt Track Driver – easily one of the games that defined my childhood. Now, in 2021, we have what looks to be the next evolution of that.

So this game is kinda all over the place for me. And I’m going to try to explain why by starting with what I do like about it. For one, the underlying mechanics. Yes, the gameplay is simple – kinda expected that given that it is a Hot Wheels game – but the devs did a good job making sure that the actual racing feels good to play.

Responsive controls are a must in this genre and that is something on lock here. Turning, boosting, bumping, maneuvering while in the air – it’s all fairly intuitive and the only thing that will take some getting used to is the drifting. It depends a lot on the vehicle you select, but it will take some time to find that right timing for getting around bends. And you’ll definitely want to get the hang of it because higher levels of play practically rely on how well you can drift around these bends.

Another thing you’ll have to get used to are the physics. This is especially noticeable when running into walls or bopping other players while airborne – but you are driving around a plastic toy and that is something the game will absolutely let you know when you least expect it. Whether that be floating off of a small incline because you took it too fast or straight-up spinning out because of a slight bump you managed to hit – there is not a lot of weight here and it might be off-putting for newcomers.

Aside from that, there really isn’t much else to say about the core racing. It’s fast, plays well, and is quick to get into even if it does not really do much outside of the norm for the genre. If you are familiar with literally any other racing game – it’s not much of a shift here. I won’t deny that it’s a bit disappointing how basic it is, but they at least nailed those basics. 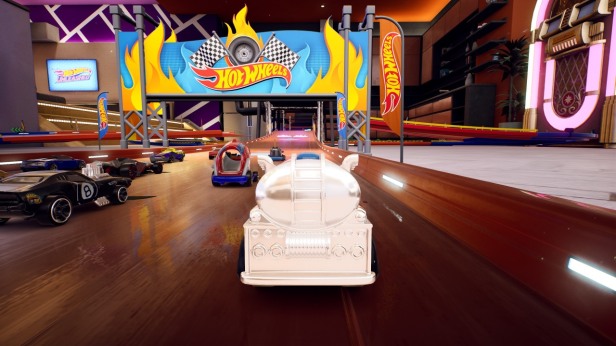 Then there’s the variety – both with vehicles and with tracks. Unleashed has a full-fledged campaign mode called “City Rumble” and it’s basically a giant board with missions scattered across it all connecting to each other in some way. These missions may be a quick race with multiple laps, a single lap event, a time trial, or – my personal favorite – a boss race. The boss races are where it gets real crazy, with tracks twisting and turning all over, going upside down at some parts, launching you through obstacles in others, and just generally being WAY more fun than the standard tracks.

It’s not like the standard tracks are bad though – they just kinda all blend together after a while even if they don’t outright repeat that often. The environments in which those tracks are built are also a bit limited – the game is launching with just five and you will quickly become acquainted with them – for better or for worse.

As for the actual variety of cars – the game does a better job, but not without its issues. For example, while there are a ton of them to unlock – a lot of them are just straight garbage. Or at least, they hardly compare to the more well-rounded cars with better stats. I may have dumped a ton of in-game money on a tank, but you bet that tank will hardly be able to catch up with the others – even after I upgraded it. It felt more like a gimmick just for the sake of it and I quickly fell back to using the faster cars with their better stats – which, from my experience in multiplayer, are really the only viable options if you want to win.

Then there’s the difficulty. I played the game on a mix of normal and hard difficulty, not because I wanted to, but because the balancing felt a bit off. On normal, it was almost too easy – I would get first early on and maintain that all the way through the track. On hard though, it was very difficult to even get into the top three – at least, until I got the right car unlocks and upgrades.

There’s even a difficulty one higher – extreme – but that’s just pain so I barely touched it. I see varying opinions on the difficulty, so maybe it’s just me, but I would have liked to see something in-between normal and hard. Granted, it hardly matters because your rewards remain the same regardless of what difficulty you play on.

Okay, so that was most of the good (and some mixed as well) – let’s move on to the bad, starting with the outright annoying pseudo-gacha system. Hot Wheels Unleashed may not have any microtransactions, but it sure feels like it was designed with them in mind – including mechanics like loot boxes, an in-game shop with rolling stock based on real-world time, and unlocks and upgrades being so expensive that you are constantly starved of currency.

It is designed in such a way that you’ll need to grind out numerous races just to get a CHANCE of getting the car you want and this can take a while if you’re an unlucky one. I mean, props to the studio for not doing microtransactions, but these mechanics were better off left to mobile games – not some $50 racing game with a $90 ultimate edition.

And on that topic, I am not a fan of the game’s DLC model. It’s one of those new releases where, even before the game is out, you’re already being told about its various expansions, DLC packs, and “Hot Wheels Passes” – which grant you access to the upcoming new vehicles, track builder parts, customization items, and environments. Yes, it doesn’t affect the base game, but it still feels gross. 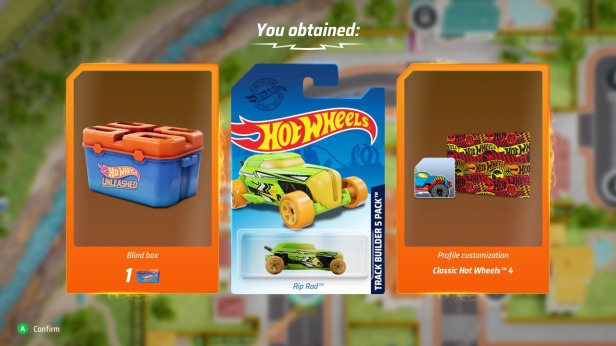 Another downside – albeit, not a major one – is the music. It’s the most generic EDM, dubstep background stuff and there isn’t a lot of it, so you’ll quickly become familiar with it all looping over and over. The graphics are at least fine, but nothing more than that – this is not a next-gen-looking game by any means.

Performance-wise, the game is also fine. I am on a GTX 1070 Ti and played at 1440p on high settings, hovering around 80-120 fps or so. I don’t think I ever dipped below 60 and I also had no issues with bugs, crashes, or anything like that. Just like the core racing mechanics, the overall package is pretty well-polished.

And that pretty much sums up my experience with Hot Wheels Unleashed. The most fun I had was in multiplayer and during the boss races, but the other stuff isn’t that bad – even if it can become a bit repetitive. And I didn’t even mention the track builder, which has so many options that it’s honestly a bit overwhelming – I’ll leave it to the experts to figure that one out.

Hot Wheels Unleashed is just okay. The racing mechanics are fine, but the singleplayer content can become a bit repetitive. The car variety is nice, but it comes at the expense of being trapped behind a pseudo-gacha system. The game looks fine, but the music is incredibly generic and loops often. I can’t say it’s a game I’ll come back to, but I also cannot say it is an outright bad game – it just barely scrapes by as an average one. It honestly depends on how much of a Hot Wheels fan you are or how nostalgic you are.

Quote: Hot Wheels Unleashed is just okay. The racing mechanics are fine and the car variety is good, but the single player content can become a bit repetitive and I was not a fan of the pseudo-gacha system.

Hot Wheels Unleashed retails for $50 USD on Steam. It is also available on PS4, PS5, Xbox One, Xbox Series X|S, and Switch.