Mirror’s Edge, but cyberpunk and a protagonist that is far more edgy. That’s pretty much Ghostrunner and I know I might be late with this review, but the PS5 and Xbox Series X versions are launching soon, so I figured it’s about time I give it a look.

So I feel the Ghostrunner experience can be best described as “parkour, speed, and violence”. As mentioned before, it is very similar to Mirror’s Edge in terms of movement, but with the added feature of actually decent first-person combat. You’re not given a gun, but rather a blade and it is that blade that will carry you through the experience. Whether it be used to deflect bullets, decapitate an enemy, parry another blade user – the game does a good job making your sole weapon feel more than just that.

Add onto this the numerous combat abilities – like being able to dash through multiple enemies or even launch a wind strike – the only ranged attack you have. The combat has a nice sense of variety to it even if the game does not utilize all of its mechanics to their fullest. For example, one of the last abilities you unlock allows you to mind control an enemy into killing another enemy, but its use in actual levels was so limited that I hardly ended up using it.

On one hand, it could be argued that the game allows more creative freedom by not locking you into using these abilities and letting you freely experiment, but on the other, it makes it feel like a bit of a waste. Still, the base combat is what matters here and Ghostrunner does a solid job on that front. Satisfying hits, proper amount of feedback – it’s all there.

Perhaps bigger than the combat though is the movement. Dashing, sliding, wall-running, grappling, mid-air evading – it is a VERY fast and VERY fun. Once you get the hang of it, you will be flying all over the place, killing enemies in rhythm with your movement in the most fluid fashion. I don’t know how exactly to describe it – but it just feels good to control. It’s intuitive, responsive, and the perfect complement to the fast-paced nature of the combat. 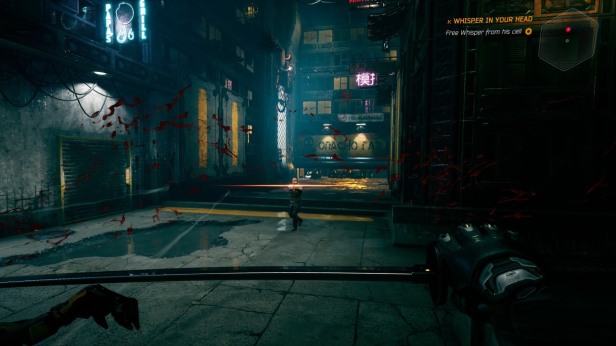 Really, this makes it a god-tier speedrunning game if you want to go that route. There are so many different ways to tackle each level that you can easily spend a lot of time optimizing that perfect run. And that’s just in campaign mode, there’s also kill run, wave mode, and hardcore mode to mess around in outside of the main story – a story that should take you around 5-7 hours to clear.

All of that said though – the gameplay is not perfect. I don’t know why, but the studio thought it would be a good idea to interrupt this fast-paced and fun gameplay with these slow and boring story segments. Not just cutscene stuff though, but these entire gameplay segments where you’re in this digital realm and have to solve puzzles to advance – all while story dialogue is playing in the background. It is so out of place in comparison to everything else going on in the game that it really takes you out of the experience.

It’s not like the story is outright bad – I mean, it is at least fitting for the cyberpunk game world – but the fact that it’s tacked on to these puzzle gameplay segments just feels wrong. The game would have been much better off had they went the full DOOM route and just had the story as some afterthought, not something to interrupt the gameplay with.

And another iffy point on the game is its difficulty. On one hand, I did like the sense of challenge and the fact that you can instantly respawn. The checkpoints are plentiful enough that it never felt like I was hitting a wall, but the gameplay loop relies HEAVILY on trial and error. Like, 90% of the time you will have to die over and over to get a grasp of how to solve a certain area – memorizing enemy spawns and such.

A lot of the time, you won’t know what killed you until you respawn and notice that a enemy is sneakily placed to the side of another, diverting attention away from it until you die to it at least once. I am not the biggest fan of this gameplay approach, but the instant respawn and numerous checkpoints at least made it a bit more tolerable here.

As for graphics, the game looks great. It’s got that neon, cyberpunk world design and it looks really good in motion, in particular with its use of lighting. Character designs are good too and, again, fit the theme of the world. What blows all of that away though is the soundtrack. This is some grade A cyberpunk EDM gold – the perfect complement to the setting and fast-paced nature of the gameplay. It’s the kind of soundtrack where, immediately after beating the game, I went and loaded it up into my usual playlists – 100% something I will be listening to in the future.

Performance-wise, the game is also fine. If anything, it actually exceeded my expectations. It looks better than a lot of the games coming out nowadays and somehow runs better than them too. I played at 1440p on high settings and hovered around 80-110 fps for most of the experience, never dipping below 60. This is on my aging 1070 Ti too, so A+ on the optimization here. Granted, I did run into one crash – so maybe A- instead.

Ghostrunner is incredibly fast, violent, and fun – taking the parkour elements of games like Mirror’s Edge and slapping them into a vibrant cyberpunk setting with actually decent first-person combat. It’s the kind of game where it just feels good to play – even if the story and trial-and-error design may bring it down a bit.

Quote: Ghostrunner is incredibly fast, violent, and fun – taking the parkour elements of games like Mirror’s Edge and slapping them into a vibrant cyberpunk world with actually decent first-person combat

Ghostrunner retails for $30 USD on Steam, but you can get an official Steam key for 10% off using my Gamesplanet partner link. It is also available through GOG and on PS4, Xbox One, Switch, and – in a couple days – PS5 and Xbox Series X.