Yet another Japanese series getting released out of order in the West. This time it is for an HD remaster of the original Akiba’s Trip, previously exclusive to Japan on the PSP. We already got the second and third games in the West, so it is about time we got the first – even if 10 years late.

So this game is a bit unique. It is not your everyday, straightforward action JRPG. Rather, it feels like a collection of interesting ideas all thrown into one little package. Some of these work, some of them do not. The combat is a prime example of this.

It revolves around this “strip” mechanic, where enemies are defeated only after you strip their clothing off. You are able to target their hat, top, and bottom individually in order to weaken them before going in for a strip attack to remove it entirely. This also applies to you though, so a lot of fights end up becoming this tug of war mashing fiesta. It sounds kinda out there, but this was actually a very cool mechanic, as there’s this entire other layer on top of it in the form of equipment. 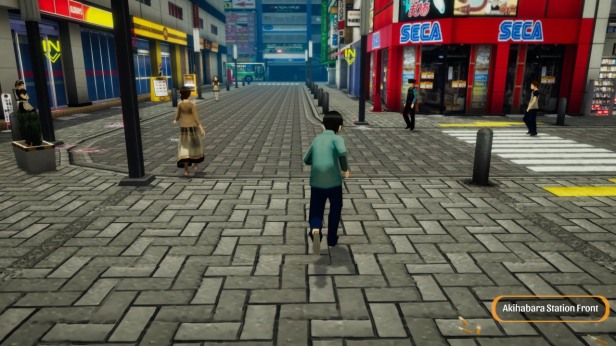 Not only can you strip enemy clothes, but if you have the required skill for a given article of clothing, you are able to strip it off entirely without tearing it and pocket it in your own inventory. This allows you to then equip it in-between areas and benefit from its stats or other effects (some even function as disguises). It was really cool how the combat tied directly into your own equipment like this and was easily one of my favorite things about the game.

However, the good points do not really go much further. Sure, the Akihabara level design is kinda neat (although expectedly dated given the game’s age), but the overall feel I got from this game was more so just “clunk”. Combat, for example, is not polished in the slightest. The strip mechanic is cool, but the actual act of attacking and dodging is oftentimes a pain. The camera is constantly working against you and because your dodging direction is tied to it, this leads to several instances where you will dodge left or right instead of back or sometimes even right into enemies.

Then there’s the fact that attacks don’t always hit the way the animation looks and stun-locking is way more common than it needs to be. Even outside of combat you can get yourself stuck on an NPC just trying to get around him. The overall movement and combat just does not feel right and offered more annoyance than it did enjoyment.

And unfortunately, that is pretty much the core to the experience. When you are not duking it out with randoms on the street, you are going through the main storyline, which should not take any longer than 10 hours to beat. It’s not necessarily a bad main story, it’s just not something I am going to remember in maybe a month or so. The characters hardly receive any development and it is more so focused on cheap laughs than actually getting you involved with some deep plot or anything. That approach can work, but only when the core gameplay is strong enough to carry it and unfortunately that is not the case here.

As for the technical aspects, the game is mostly fine. It runs flawlessly at 1440p unlimited FPS on my 1070 Ti and even offers a launcher to change some basic graphical settings. Controls are great on an Xbox controller, but the default bindings for keyboard (yes, just keyboard, no mouse) make the game practically unplayable for me. I could not find a way to rebind those controls, so you might just want to rule out keyboard controls unless if you’re some sort of keyboard god.

That said, no, I would not recommend AKIBA’S TRIP: Hellbound & Debriefed. There are some good ideas here, but the incredibly clunky combat and mediocre storyline pretty much killed any sort of enjoyment I had with it. Maybe if you’re a fan of the other two in the series and want to complete your playthrough of it, but otherwise this one is an easy pass

Quote: AKIBA’S TRIP: Hellbound & Debriefed has some good ideas, but the incredibly clunky combat and mediocre storyline pretty much killed any sort of enjoyment I had with it.

AKIBA’S TRIP: Hellbound & Debriefed retails for $40 USD on Steam. It is also available on GOG, PS4, and Switch.