The long-running Ninja Gaiden series has finally arrived on PC (and no, Yaiba does not count). I was a big fan of Ninja Gaiden II back on the Xbox 360, so having that bundled with the other two was definitely something I had to check out.

Anyways, it is effectively those three games upped to modern display standards, including updated textures, smooth framerates, and higher resolution support. They all look great as a result, especially considering they are over 10 years old at this point. The collection also come with a bunch of the DLC released for the previous versions, such as new game modes and costumes.

As for the games themselves – all three are a lot of fun. It’s been years since I played II back on the Xbox 360, so I honestly forgot how much I love this type of hack-and-slash gameplay. Fast-paced combat with a wide assortment of moves, weapons, and abilities to use, level design that encourages constant movement, and boss fights that are both challenging and rewarding. Make no mistake, all three are very difficult games. I have seen some compare it to Dark Souls – and honestly, that is a fitting description – but Ninja Gaiden 1 might actually be harder than that, helped in no part by its absolutely garbage camera.

But if you can get over that difficulty, there is a good time to be had. These games – particularly Ninja Gaiden 2 – are what I would point to as peak hack and slash gameplay of the late 2000s. They’re just super satisfying to play, with combat that has a real sense of impact to it and intuitive controls to match. They can be a bit weird at times with some of their design choices, but I had a great time with each – even the third one, which while not as good as the previous two, doesn’t deserve some of the hate it gets.

Each game has a story too. It starts off relatively light in Ninja Gaiden 1, but by 3 it reaches ridiculous levels – and this is probably why the third gets so much criticism. It’s just unnecessary for there to be such a complicated plot for a simple hack and slash like this and I think 2 is the best at balancing the story and gameplay stuff. As for length, the first two games are roughly 14 hours long and the third is half that. Of course, this depends on how much you die – I did a lot, especially in the first game.

So let’s move onto the port. It has its pros and cons, but the bottom line is that it works. Across all three games, I never had issues with crashes, freezes, bugs, fps drops, or anything like that. The only issue I had was that each game would launch in windowed every time I opened one, but I was told this would be fixed ASAP – if not already by launch.

Resolution-wise, all three can run at up to 4K and I ran each of them at 1440p with no issues. I think the 1440p support is just scaled down from 4K – as the window title for each game says “4K” – but it looks great so I guess I can’t complain.

All three are also locked to 60 fps – perhaps my least favorite aspect of these ports. These are definitely games that could have benefited from an unlimited fps option, so it’s disappointing to see. At least the 60 is stable though, it’s far better than what we got on the original console versions. As a side note, some of the cutscenes still run at 30 – probably because they were pre-rendered. It’s not a major issue, but worth noting regardless.

As for graphical options – there’s basically none. You get your in-game sliders for brightness and such, but no actual settings like anti-aliasing, resolution scaling, VSync, etc. This is pretty typical for a Koei Tecmo PC port, but again, disappointing to see given that we got at least some options with the recent Nioh 2 release.

Perhaps the laziest aspect of these ports would be the complete lack of any sort of keyboard and mouse controls. In fact, the game does not even appear to recognize ALT+F4, so I’m pretty sure it straight-up ignores anything other than a controller. Although I can’t see myself using keyboard and mouse for a game like this personally – this is a PC game and you really need to have at least the bare minimum there for those that don’t have controllers. 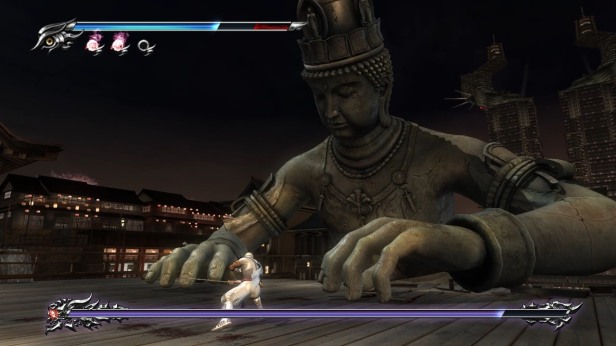 I believe the biggest issue people are going to find with this collection is not with the port itself, but rather with the versions of the games picked. For Ninja Gaiden 1 and 2, the collection opts for the Sigma versions, which remove some things from the original and adds others. Sigma 1, for example, has fewer unlockable costumes and removes the SNES and arcade unlockable games. However, it adds several new enemy types, a couple new weapons, and even entire new game chapters. Sigma 2 has toned down blood and gore and decreased enemy spawns, but adds new playable characters, new game chapters, and new bosses.

It is basically a trade-off. You get more content in general with the Sigma versions, but lose out on some things that fans really liked from the originals – so that’s something to keep in mind if you’re debating between this collection and the original games. For me, it is an easy choice. I would go with this collection simply due to their updated graphics and framerate. The bunch of bonus stuff on top of that is just an added extra.

So, would I recommend this collection? 100% yes. These are some really fun hack and slash games and honestly, a bit nostalgic. They don’t really make them like this anymore and I was glad to finally get to experience them in full 1440p, 60 fps glory. They each have excellent combat with a bunch of depth, a solid sense of movement, fun boss fights – this is easily up there with Nioh 2 as one of my favorite releases of the year. Sure, there’s going to be debate amongst fans and many will probably call this collection terrible, but that won’t stop me having fun over here.

Quote: Ninja Gaiden: Master Collection is 100% worth a look for hack and slash fans and offers new players a chance to play some of the best in the genre – even if there are still some lingering issues.

Ninja Gaiden: Master Collection retails for $40 USD on Steam. It is also available on PS4, Xbox One, and Switch.