Alright, so we’re back with yet another slice of life romcom from NekoNyan. This one is developed by Smee and it is actually their third release on Steam following Fureraba and Making Lovers – the former of which I enjoyed when I reviewed it a few years ago. It’s always nice to have one of these school life comedies to kick back to, so let’s see what Sugar * Style has in store.

Right off the bat, Sugar * Style immediately sets itself apart from the crowd with its setting. The usual high school romcom is replaced with a college romcom instead and the characters are upped in age to match. As someone tired of the same old high school setting, this was a nice, yet familiar change of pace. You get to keep the school setting somewhat, but with slightly more adult characters.

However, the characters aren’t complete children. With the university setting, responsibility actually becomes an important theme here. The characters are getting their lives together and trying to figure out what it is they want to do and the game does a good job showing this aspect of growing up, albeit, in a comedic way.

There is even an entire game mechanic dedicated to this theme. Early on in the story, you get to pick the main character’s “job” that he will do in-between events at the dorm. This can be fixing up the place as a carpenter or running the dorm’s security to give a few examples. Depending on what you pick, you’ll go through a number of random scenes related to the job throughout the common route. Granted, these scenes are mostly filer slice of life stuff, but really, that’s just this entire game in general. 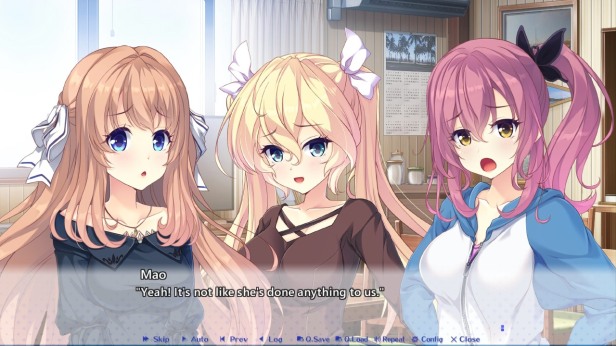 There is some progression here, but it might actually be better to think of Sugar * Style as a series of cherry-picked slice of life scenes. As stated before, this game weighs heavily on the comedy aspect and these scenes really emphasize that. Cutting off lines for comedic impact, voice acting with a sense of edge to it – the game does a great job in that department even if the humor can be a bit tropey.

That’s not to say that there’s no development though – the game is a romcom after all and you do get to pick a heroine route and go through all the usual romance stuff. This aspect of the game didn’t really blow me away, but I wouldn’t say it was bad either. If anything, the balance between the romance stuff and comedy later on is pretty well-done. 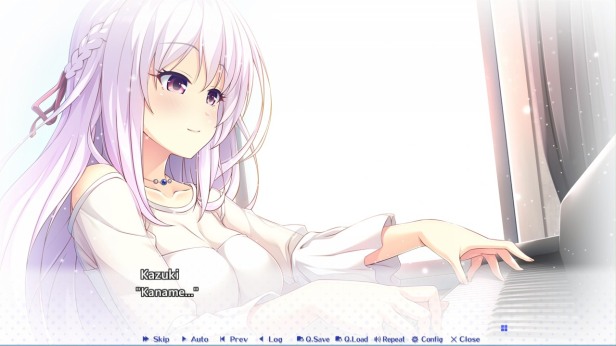 In fact, the overall structure to this game is quite unlike any other VN I’ve played. The game starts with a prologue, but then has you go through the first episode of each heroine’s routes, giving you a small showing of what to expect from the full route. Once you’ve gone through those, the game prompts you to pick a heroine (one of only two decisions in the game) – and THAT is when the common route properly begins. Yes, not the heroine route, but the common route.

The two actually take place simultaneously, with heroine episodes scattered throughout the common route until a breaking point later on. It is a very unique structure for a VN and honestly a refreshing one. I got to experience the comedy aspects of the common route with ALL of the characters while at the same time laying the foundation for the heroine route with my chosen character.

The writing overall has its ups and downs like this. The structure is good, but the comedy can be a bit hit or miss. I would say the overall pacing is fine, but it’s honestly hard to mess that up when your game is just a bunch of slice and life stuff. To sum it up though, I would say it’s decent. Not as good as the writing in Fureraba, but better than others I have played in the genre.

And for those wondering about the length – Sugar * Style is fairly long for a full-on slice of life comedy. It should take somewhere around 30 hours to clear all of the routes, but of course that number may change dependent on your reading speed.

Then there’s the art, music, and settings. On these aspects, the game also does fine. You can change the font, colors, UI prompts, and even bind your own shortcuts – so passing grade on the settings. The music may not be something I’ll listen to outside the game, but it’s not overly generic or repetitive. The art is also good across the board, with assets that look good at 1440p and some nice character designs on top of that – well, minus one part.

It actually took me an hour or so to notice, but once I saw how skinny and tall each character’s necks were, I couldn’t unsee it for the rest of the game. They look like sticks that shouldn’t be able to support the weight of the head and I’m honestly baffled I haven’t seen anyone else bring this up. Maybe I’m the weird one, I don’t know. 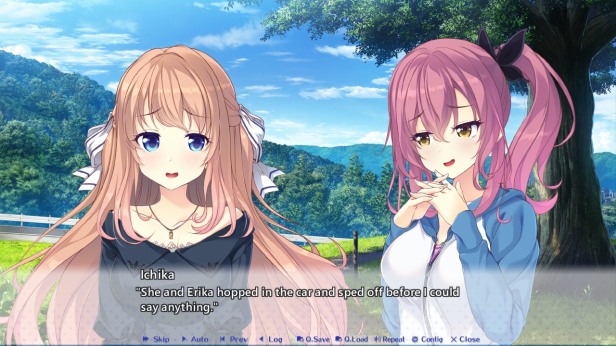 So that said, I would give Sugar * Style a light recommendation. There are certainly better options in the genre, but if you are a fan of Smee’s past works, then you’ll be right at home here. You get a cool setting, a cast of quirky characters, and a story that goes all out on the comedy, sometimes to ridiculous levels. It’s never not comfy though and it’s the perfect type of VN to just sit back and play through in small chunks. That’s what I did over the past month and I don’t regret my time with it.

Quote: If you are a fan of Smee’s past works, then you will be right at home with Sugar * Style. You get a cool setting, a cast of quirky characters, and a story that goes all out on the comedy.

You can buy Sugar * Style on Steam here. It retails for $30 USD, has a free 18+ patch for the Steam version, and is also available through Denpasoft, JAST, and MangaGamer.