So, I’ll start by saying that this game is weird. It is the kind of visual novel where you don’t really know where it’s going and even when it does arrive somewhere, it leaves you with numerous questions. To give some background: MAMIYA is a game divided into two parts: FallDown and DownFall. Both parts consist of multiple routes, each focusing on a specific character. While reading the first part, there’s very little overlap with the other routes outside of one specific character – Mamiya.

Each character has a different perspective on who exactly Mamiya is. One route he is some kid with a gas mask, whereas in another he is straight-up invisible. Mamiya serves as a sort of emotional support role in each route – as each character has some darker problem that they keep hidden form others. It is an odd setup, but I kinda liked it. It gives you a handful of seemingly unconnected stories and links them together through this strange being that is Mamiya. 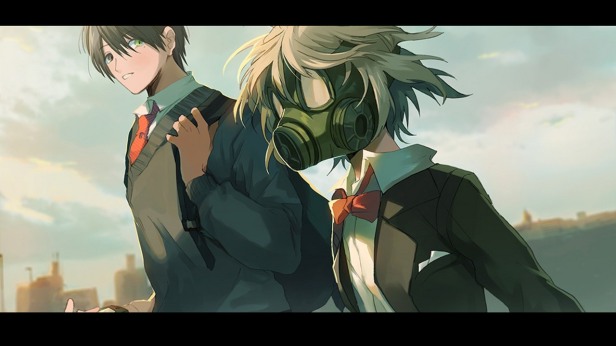 With each route, I only had more questions as to his real identity and purpose and this kept me going through the early stages of the game. With a lot of other VNs, the beginning is a bit of a slog, but that isn’t really an issue with MAMIYA. Granted, it’s not without its issues – mainly the fact that you don’t really know what’s going on – but it’s an interesting enough setup for the second half of the game: DownFall.

That half is unlocked once you complete all of the routes from the first part and it’s really where things start coming together. Suddenly, the characters are linked and there is an even bigger mystery behind who exactly Mamiya is. This part was great and the game shines when it is tackling this mystery. That said, it does not always do that. Although not too prominent in the first part, the second part really likes to go off on tangents. You will go from some new revelation about Mamiya to all the characters getting together to look for a lost pet, for example.

These tonal shifts to something more lighthearted are frequent and do end up detracting from the overall experience. It’s not like a dark and atmospheric story like this can’t have them, but it has to handle them carefully and MAMIYA unfortunately does not do that too well. Granted, these segments are in the minority, but enough that the second half was a bit of a slog at parts.

Aside from that, I also was not a fan of how wordy the writing could be at time. Taking a simple concept and overexplaining it in like ten lines is something this game does quite a bit. Again, this combined with the tonal shifts can make it boring to read at times.

If you can get through it though, there is a decent story here. Six different endings, a playtime of around 15 hours or so, the overall package is actually fine, it just stumbles a bit along the way. Maybe I’m just being overly forgiving given that we rarely get VNs like this, but I did have a good time with it.

Of course, I should also mention the art. If you couldn’t already tell by the screenshots, this is a very indie production and the art reflects that – both in good and bad ways. It’s good in that it’s somewhat unique for the medium, but bad in that the technical aspects are subpar. Limited backgrounds, few character assets, it’s not a high-production game by any means and places more focus on the story. The same thing applies to the music, which is mostly forgettable aside from this weird bug on certain tracks that would cause the volume to reset and require me to jiggle the slider in the settings to fix it. And no, this game has no voice acting, thought I should make that clear as well.

MAMIYA is certainly not the best in the genre, but it’s a nice break from the tedium we usually get. A dark, existential story, interesting characters, weird, but effective plot development – it’s a decent overall package even if the writing and technical aspects may not be the greatest. I’d recommend it for those that are into these types of stories and have already exhausted the other options in the medium.

Quote: MAMIYA may not be the best in the genre, but it is a nice break from the tedium we usually get. Dark, existential storyline, interesting characters and plot developments – a decent package overall.

You can buy MAMIYA on Steam here. A demo is also available and covers the entire FallDown section of the game if you want to give it a try before diving into the second half.