It took ten years, but the original Gal*Gun is now available to fans worldwide. It comes in the form of a remaster and, as someone that plays a ton of these more questionable titles, I had to give it a look.

So I’m just gonna be blunt and not sugarcoat things here: I did not enjoy my time with Gal*Gun Returns and it was honestly a struggle to play through. For those that don’t know what the game is, it’s an on-rails shooter kinda similar to House of the Dead. You’re moved around automatically and all you have to do is aim your cursor at girls and left click – that’s it, that’s the extent of the gameplay here. Sure, there are a few extras like weak spots, doki doki mode, and some other mini-games, but the core is some of the most basic fps gameplay you can get.

There’s no moving your camera, no abilities outside of your basic left click to shoot, and even when you do get mini-games, they just repeat the same basic “move your cursor and shoot” gameplay, but with a different skin slapped on it. This applies both to the games in-between levels and the “doki doki mode” that you can activate with a middle click. The latter mode simply adds the extra step of having to hold right click to zoom before shooting. There’s even an entire game mode based on just this mechanic if you want to avoid the rail aspect of the game. It’s boring for sure, but an option for those interested.

Granted, it is nice to have at least something interrupting the otherwise monotonous gameplay, but there’s no real depth here – not in the core gameplay, not in the mini-games, and not really anywhere in the game at all. Just constant left-clicking of the same two enemy types (which are only different by way of their HP pool) and on the same blocky levels. Even the first House of the Dead game – released all the way back in 1996 – had at least some variety there.

It’s not even a difficult game either. I breezed through it on the hardest difficulty and don’t think I ever dropped below 50% HP. Granted, this is in part due to the game being originally designed for controller (and thus, harder to aim), so if you’re taking it on with a mouse and keyboard, don’t expect much of a challenge.

As you can imagine, all of this makes the gameplay grow repetitive FAST, like just 20 minutes fast. In fact, by that point, you’ve already seen most of what the game has to offer – it’s just a matter of repeating that until the end. And it won’t even take that long either, with each route taking about an hour and half to beat and there being four routes for a total of about six hours. Big thing to note with the different routes though is that you’re pretty much playing the same game, but with slightly altered locations and a different character story – the game really tries to squeeze as much gameplay as it can out of what little it has to offer.

The story element is there, but don’t be expecting too much from it. It’s told through some very basic visual novel segments that add just the bare minimum backstory to each character. I mean, this isn’t the type of game you’re playing for the story anyways so I can’t say I expected much there.

As for why you would play this game, many would point to the fanservice aspect, but even that is kinda limited here. Unlike Gal*Gun 2, there’s no stripping of the characters and the most you’ll get are some upskirts and a few questionable camera angles. I honestly don’t care for this element, but if you’re the type to base a purchasing decision off of it, well this one might not be the best choice.

What made all of this even worse is that this is supposed to be a remaster. Normally, you would expect better graphics, additional content, and other technical improvements, but Gal*Gun Returns hardly does that. For one, the fps is capped at 60 and it isn’t even a constant cap. There are several elements still capped to 30, including all the dialogue scenes, the menus, and even gameplay segments like boss fights. It’s really only the core gameplay that is 60. 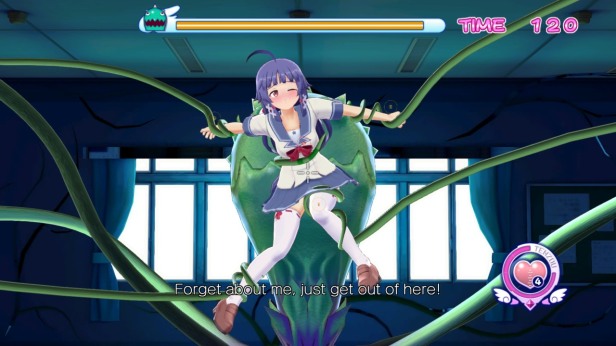 On the resolution front, the game may say it offers support for 1440p and 4k, but those resolutions are just upscaled from 1080p. This is immediately noticeable with the character models because there’s no anti-aliasing and all of the jagged lines are blown up for you to see. In fact, there’s no graphical settings outside of resolution, fps, display mode, and screen brightness, it’s as bare as PC ports come.

And of course, the textures and overall graphical quality across the board are not good – it looks just like what I would expect from the Xbox 360 original, not some remaster for modern platforms. Even Gal*Gun 2, a game that came out three years ago, managed to offer proper high-res support and framerates above 60, so I fail to see why this supposed remaster cannot do the same. I can see some people trying to excuse it by pointing to the fact that the original did not offer this, but shouldn’t we be expecting at least that much from a remaster?

I will give the port some credit, the controls were much better than what we had with Gal*Gun 2. I had no issues playing through with mouse and keyboard and the only thing missing there was the ability to navigate menus with the mouse.

Gal*Gun Returns is a flawed remaster of a bad game. From its tedious gameplay to its extreme lack of depth, there’s honestly not much to like here – even if you’re interested in just the fanservice aspect. The “remaster” portion of the game is just an outright disappointment, with no proper high-res support and a framerate that constantly jumps between a 60 fps cap and a 30 fps cap. For carrying such a premium price, we should expect better.

Quote: Gal*Gun Returns is a flawed remaster of a bad game. From its tedious gameplay to its extreme lack of depth, there’s not much to like here – even if you’re interested in just the fanservice.

You can buy Gal*Gun Returns on Steam here. It is also available on Switch.