Now, I won’t deny that a lot of the content is gratuitous and simply there for shock value, but I can at least respect the effort put into making the experience as depraved as possible, enough so that I couldn’t even show some of the scenes in my video review even when censored. So yeah, the game has that part on lock for those that just want to play it for that.

For those that want an actual game, well, Lust from Beyond might not be the best option. This is one of those first-person horror adventure games where the gameplay is almost entirely just you walking around, examining objects, moving things to and from, and solving some very basic puzzles. It is not a straight-up walking sim, but the gameplay that is there is dead simple.

Like, most of the objectives simply have you searching the environment for an item or two before then having you repeat that in the next area and so on. Because there are tons of doors, drawers, and other spots to look through, the gameplay can come off as padding at times and a good chunk of my playtime was this aimless wandering around hoping to come across the item that allows me to progress.

It’s worse in that sometimes, you’ll see an item of interest, but you can’t interact with it because a specific line of dialogue hasn’t played yet or some other trigger has yet to activate. That pipe on the ground may look useful, but no you can’t touch that until a completely irrelevant line of dialogue has played – it’s actually a bit annoying. The puzzle design is just as bad, as the vast majority of them simply require you to take a piece of paper or some other bit of information and apply it elsewhere.

For example, there was one part where I had to get a mask from an NPC’s room. In order to enter the room, I first had to talk with the NPC, learn that they wanted an item in exchange for the key, talk with another NPC to get that item, complete the exchange, and enter the room only to discover that the mask is locked behind a combination lock. Of course, the combination is hidden in that room so then I have to go through the process of opening all the drawers, cabinets, and other hiding places before I can finally acquire the mask and proceed. I understand that the devs want to make this more than a walking sim, but the gameplay is so basic that it’s just unnecessary at times.

And of course, you have all the usual horror game fluff on top of that. The random jump scares, the forced stealth sections, and the clunky combat too. That last one is especially bad here, as to use a knife, you have to hold right click to ready it, and then left click to actually swing. You can’t tell if your hit is doing damage as there’s no indicator or other feedback, it’s like your swinging at air. Once the enemies have taken enough damage, they just drop in place like a ragdoll. Granted, combat is considered a last resort in this game, but when you do have to use it, it’s definitely not a fun time.

So you would think, “okay, but this is a story-focused game, so surely that’s the focus here?” and yes, you would be right. Lust from Beyond is the second game in the Lust trilogy, but is a standalone story, so you don’t need any prior knowledge. The problem is that the story is not good. For one, it’s got some really wonky pacing. The first ten chapters felt like it could have been its own game – and honestly, it would have been better off – but it just kept going.

The next several chapters it goes overboard, ramping the pacing up to the max and subjecting you to a ton of dialogue info-dumping. And no, it doesn’t help that a lot the important names and places are stuff like Ac’mlale, Lauv’abrarc, Ughro’eccna, and Xu’thrar. I mean, it was already pretty hard to keep track of towards the beginning, so you can imagine how the last several chapters went. It was like the devs had to wrap up everything quickly in order to stay on schedule, resulting in a shorter and more rushed game (it took me seven hours to beat by the way).

Even outside of the pacing issue, the story has some really poorly executed twists – the kind where you can 100% tell they are coming and it ruins any sort of impact they were going for. The game drops the most obvious hints leading up to them, so it would honestly be a bit surprising if someone didn’t get where it was going.

However, those two issues pale in comparison to the game’s dialogue and voice acting – which are easily some of the worst I’ve been subjected to in any horror game. Robotic conversations, unnecessarily exaggerated lines, overly wordy sentences, it’s all there and had me wondering “what kind of humans actually talk like this?” And I don’t mean to slam the voice actors, but let’s just say that they at least tried – the source material must have been hard to work with. 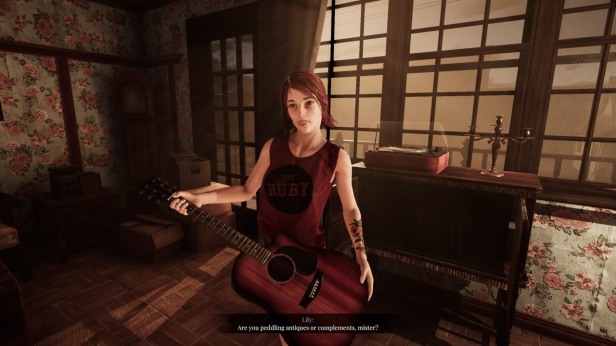 The performance is where the problems are at. Now, I’ll preface this by saying that I am still on a 1070 Ti, as I’ve been unable to get my hands on a 3080 yet. However, this card is above the recommended specs, along with my 3700x for CPU. Despite this though, I ran into countless issues with frame drops, stuttering, and just a general mess on the performance front. For example, a lot of the time I would be well above 60 fps, but still have this slight stutter effect when moving around, like the camera is jittering a bit. This makes the movement look choppy and forced me to enable motion blur (a setting I usually despise) just to mask the issue.

Even then though, it’s still not entirely smooth – and this is still with the fps staying above 60 – so I’m not sure what exactly is going on here. That’s before the fps drops though, which are plentiful depending on the area. The alien dimension, for example, dunked my fps from 120 down to like 40. I found that the shadow setting was the main culprit there, as turning that from medium to low gained me 50 fps alone. It became this fun mini-game where I would have to constantly change my shadow settings when swapping between that realm and the real world, as keeping shadows on low in the real world just does not look good.

And then there’s the loading times, which I found to be quite long for having the game installed on a PCIe 4.0 M.2 drive. I’m talking upwards of twenty or so seconds, which is really long for a game like this and something that I would expect from a console, not a PC with one of the fastest drives you can get.

Quote: Lust from Beyond is not a good game. From the tedious gameplay to the story full of some of the worst dialogue in the genre, it isn’t worth the time unless if you’re 100% in for the ero content.

You can buy Lust from Beyond on Steam here.