We usually get a few Ninja Gaiden-inspired games released each year, but the problem is that many of them just come off as barebones, hardly enough to compare to the classic. So, the question is, how does this one compare to the rest?

So right off the bat, the inspiration behind Cyber Shadow is very clear. Not just with Ninja Gaiden, but with NES game design in general, pulling from other classics like Mega Man and even a bit of Castlevania. However, it loses that NES stiffness in the process, offering some more responsive controls and movement. For example, you’re not locked into a direction when jumping – you can freely move around when in the air and even do dash attacks back and forth without touching the ground.

The overall combat has a similar feel to it. It is simple, but it is fast, polished, and incredibly satisfying, especially once you’ve got all of the abilities to work with. You start out with just your basic attack, but eventually get ranged attacks, rising attacks, airstrikes, and even parries. That may not sound like a lot, but using all of these effectively can take some getting used to, at which point the combat really shines. This same style of progression can be seen with the movement, such as the unlockable dash attack and wall slide that not only help with combat, but with exploration as well.

And on the topic of that exploration, there’s a nice of touch of it to the level design. Hidden walls, secret rooms, and even Mario-style out of level paths, the game has a good amount of hidden stuff to find. The permanent health upgrades, for example, are just one of the things that can be found in these secret areas. The level design in general though has some nice variety to it, taking you from a city overrun by robots to the depths of a reactor and then back to the docks for a fight on top of the water.

Each of these comes with their own matching boss fight, fights that are both challenging and unique in their own way. This same kind of variety can be seen with the enemies too. Ranged, melee, divebombing, there’s a good amount there and definitely enough that at least one will bring you pain whenever you see it.

That brings me to the difficulty, as this is anything but an easy game. I was actually tricked at first, because I was breezing through the first third or so of the game and was like “is this really it?” only for that difficulty to steadily ramp up as the game went on and reach very high levels by the end of it. At that point, I was getting absolutely slapped by certain rooms, some of which don’t even look that difficult on the surface until you’ve actually played them. This all culminates at the final boss, easily the hardest part of the game for me, but a satisfying sendoff once I finally managed to beat it. The game isn’t entirely evil though, there are checkpoints offered throughout and you don’t have to restart the entire game like a lot of the NES classics had you do.

For those wondering about the length, the devs placed it at 4-10 hours and I can confirm this as it took me 6 hours to clear. That doesn’t include 100% completion though, which will likely take much longer given that several of those achievements require you to do stuff like “kill this boss without using your sword” or “reach this area without killing any enemies.” The game has a touch of metroidvania to it in that you can go back to previous levels and explore them using your new abilities, which in turn allows you to reach previously unreachable secret areas. Outside of that achievement hunting though, there really isn’t any replayability, it’s a fairly straightforward game.

It isn’t just straight gameplay though, there is actually a pretty sizeable story here. It’s told mainly in text-based cutscenes, but also through character dialogue and notes scattered about the levels. As the game goes on, it leans more and more on those scattered notes and logs to tell the story, which was a bit disappointing, but again, there’s only so much you can do with an NES aesthetic like this. I personally found it pretty boring and an interruption to the otherwise solid gameplay, but it is there for those interested, just don’t expect anything too spectacular. 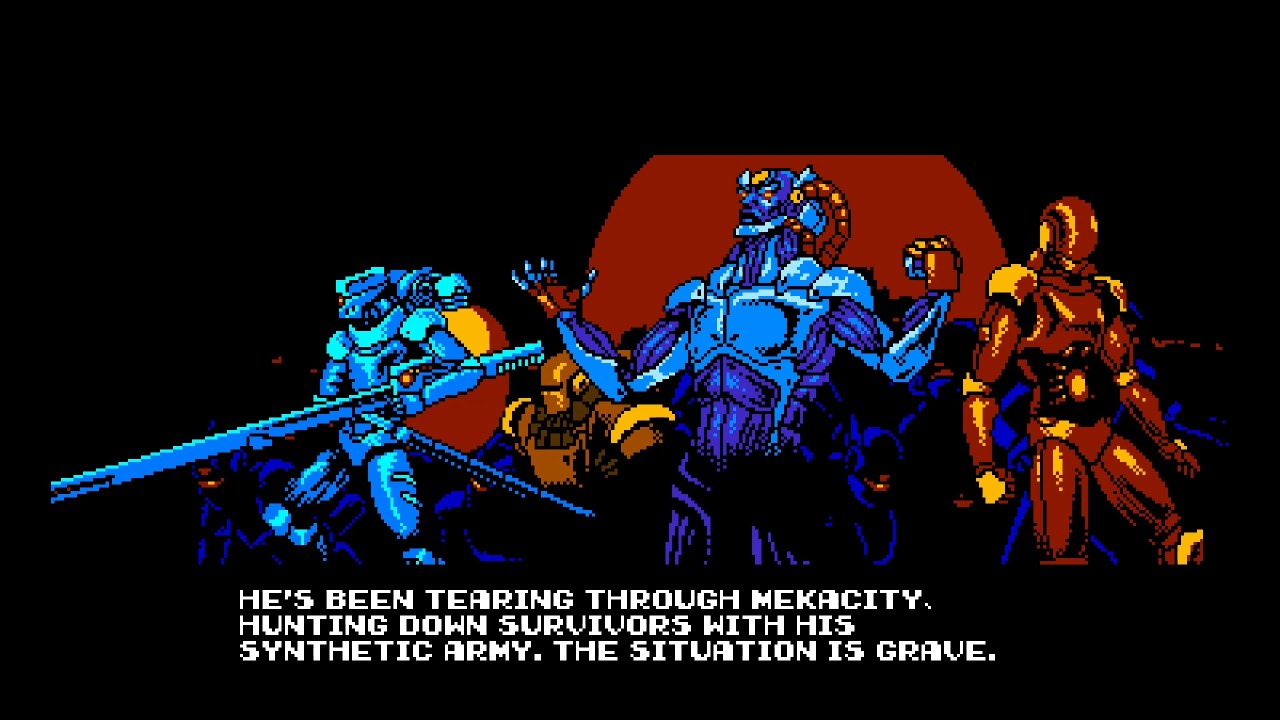 And of course, it would be wrong to close out the review without mentioning the art and music. As with the game design, Cyber Shadow takes on that classic NES-era look, with pixel graphics and all. As someone that has played a lot from that era, I can definitely say that this would be one of the better-looking ones. The sprites are nicely done, the color choices are solid, and the backgrounds are surprisingly detailed given the limitations of the aesthetic.

It does this with a bit of a modern touch though, mainly through its parallax backgrounds and much smoother animations than what you would find in an NES game. It also ran perfectly at 1440p and 144 fps, really giving those pixels the modern look. For those that want a more retro look though, the game does offer CRT filters. It also has integer fullscreen if you want those truly accurate graphics. Then there’s the music on top of that. It’s certainly not the best I’ve heard from such games, but it’s definitely not bad and really fits that “cyberpunk ninja”-kinda aesthetic the game goes for.

I should also note the controls. Cyber Shadow offers both keyboard and controller options. There aren’t too many controls to the game, but both options are fully rebindable and I found no issues when testing either of them – although I personally found the controller to be the better fit. 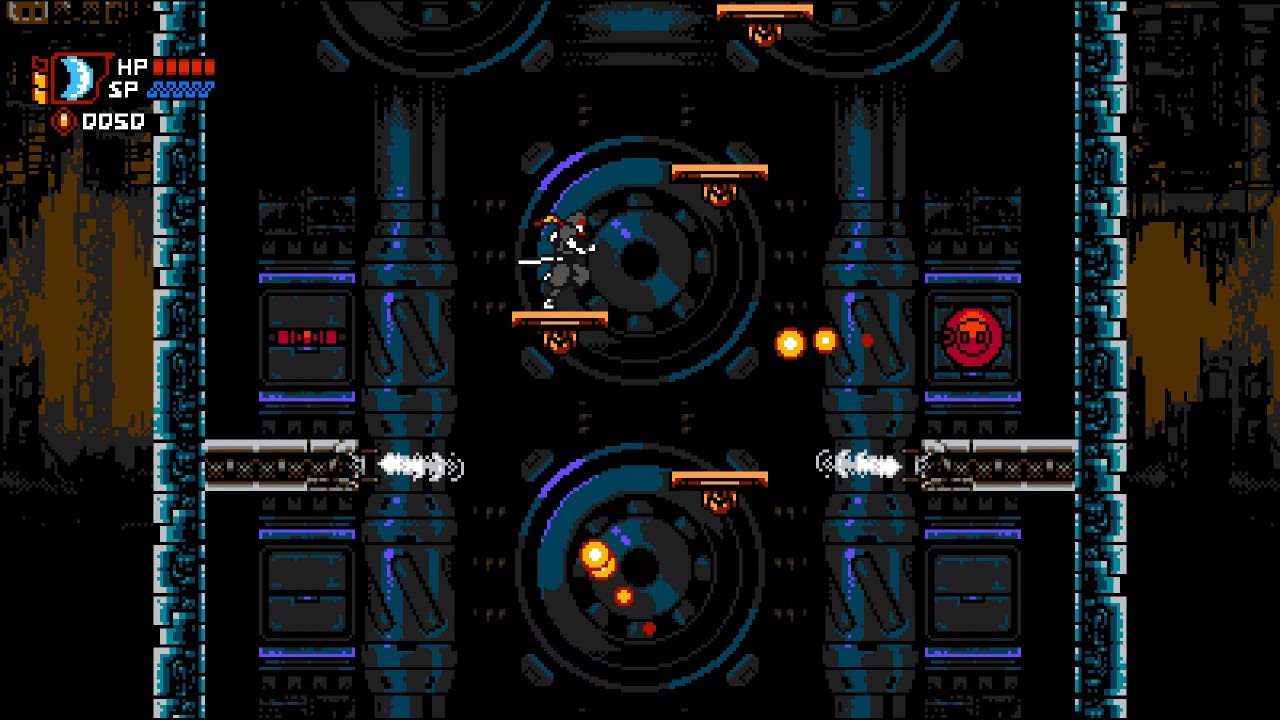 So with all of that said, I would recommend Cyber Shadow. It’s an incredibly well-polished NES throwback, with fun combat, responsive controls, and some nice art and music backing it up. The level and enemy variety keeps the experience from going stale during the six or so hours that it lasts and there’s a good amount of content for completionists to do on top of that. If you’re fan of these NES-inspired games, you’re probably gonna have a good time here, just don’t go in expecting it to be a breeze.

Quote: Cyber Shadow is an incredibly well-polished NES throwback, with fun combat, responsive controls, and some nice art and music backing it up. Well worth a look for fans of games from that era.

You can buy Cyber Shadow on Steam here. The game is also available through GOG and has a PS4, PS5, Xbox One, and Switch version as well.