A visual novel with almost Persona-style graphics? Sign me right up for that. I’ve been playing through a lot of visual novels lately with the same 2D art, so it’s about time for a change of pace.

Really cool visual direction. Necrobarista may not have the best graphics, but it makes up for this with some of the best visual direction I have ever seen in a visual novel. By visual direction, I’m referring to the lighting, camera angles, framing, and everything else that goes into presenting the graphics to the player. It is some very cool stuff here, with the camera constantly shifting between characters, going wide for certain lines to add emphasis, and even omitting dialogue entirely and just showing little snippets of animation to better illustrate certain scenes. It’s like a movie in a way and was definitely a nice change of pace compared to the usual flat backgrounds with 2D sprites popular in the medium.

Excellent soundtrack. It’s not often that I put a game on my radar solely due to its soundtrack, but that’s exactly what I did with Necrobarista. My reason is simple: the composer is Kevin Penkin. For those unaware, this is the same guy that did the top-tier soundtracks that are Made in Abyss, The Rising of the Shield Hero, Tower of God, and Norn9. So of course, it is no surprise here that the soundtrack slaps. Laidback, mellow tracks, synth-heavy action tracks, it’s got a lot going for it and complements the visuals well. Sure, it’s not on the same tier as Penkin’s previous works, but its far better than the generic OSTs most other VNs use. 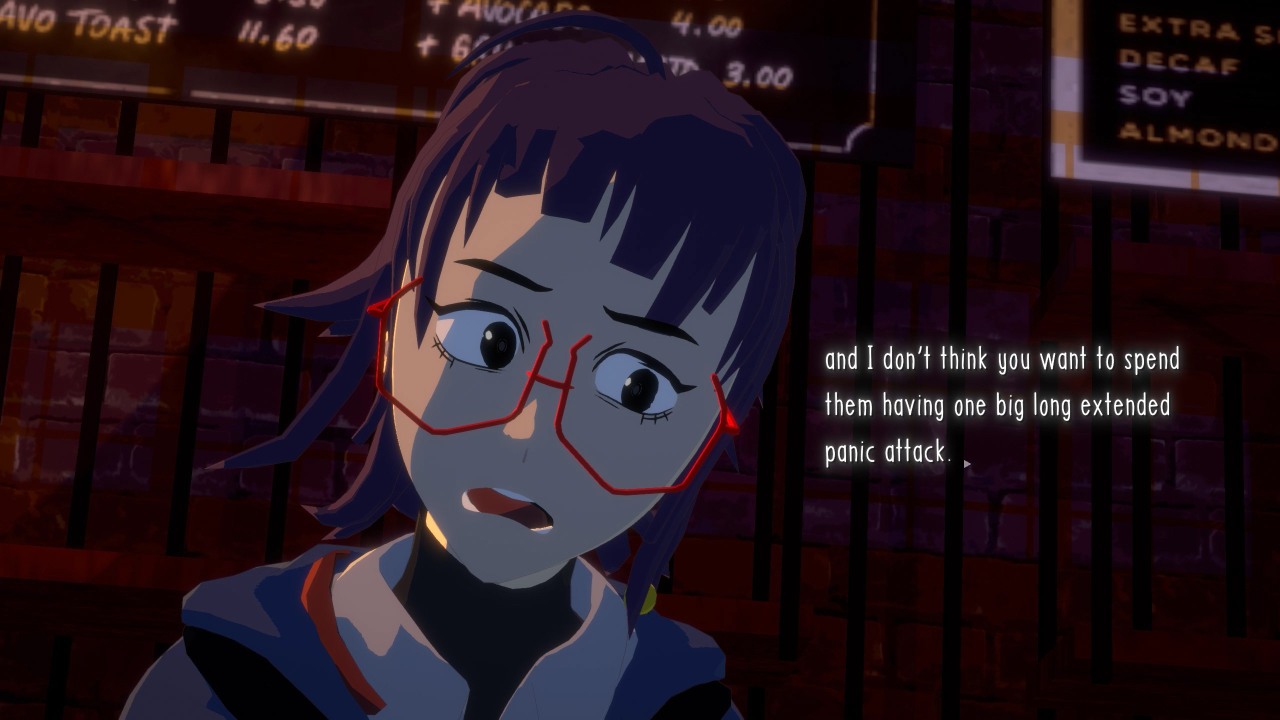 Filler storytelling. Unfortunately, visuals and music are not all there is to a visual novel. The bulk of a good VN is the story and that is something that Necrobarista simply fails at. There are a few reasons why, but the main one being that the vast majority of the game just comes off as filler. Instead of spending time actually building up an interesting plot and developing characters, Necrobarista seems to want to spend more time on useless character interactions and lengthy side stories that don’t even add anything.

For example, there’s a point in the game where a couple customers come in and have a lengthy conversation about the ethics of stealing a bottle of alcohol from behind the counter. They end up doing so and get caught by the protagonist, who talks them up about alcohol and such for the next several minutes before they leave and never appear in the story again. Another character replaces them and our protagonist now engages in another pointless conversation before that character disappears too.

Considering that all three of these characters were included in the game’s opening video, I was expecting them to have more of a role than just an utterly pointless conversation, but maybe I was expecting too much. Another example being the segments between scenes where three robots talk amongst themselves about the story. Again, these segments don’t add anything to the story other than the bare minimum of worldbuilding, if you could even call it that – most of the time they’re just telling jokes to each other and the scenes end up feeling like an extended version of the Monokuma theater segments from Danganronpa. 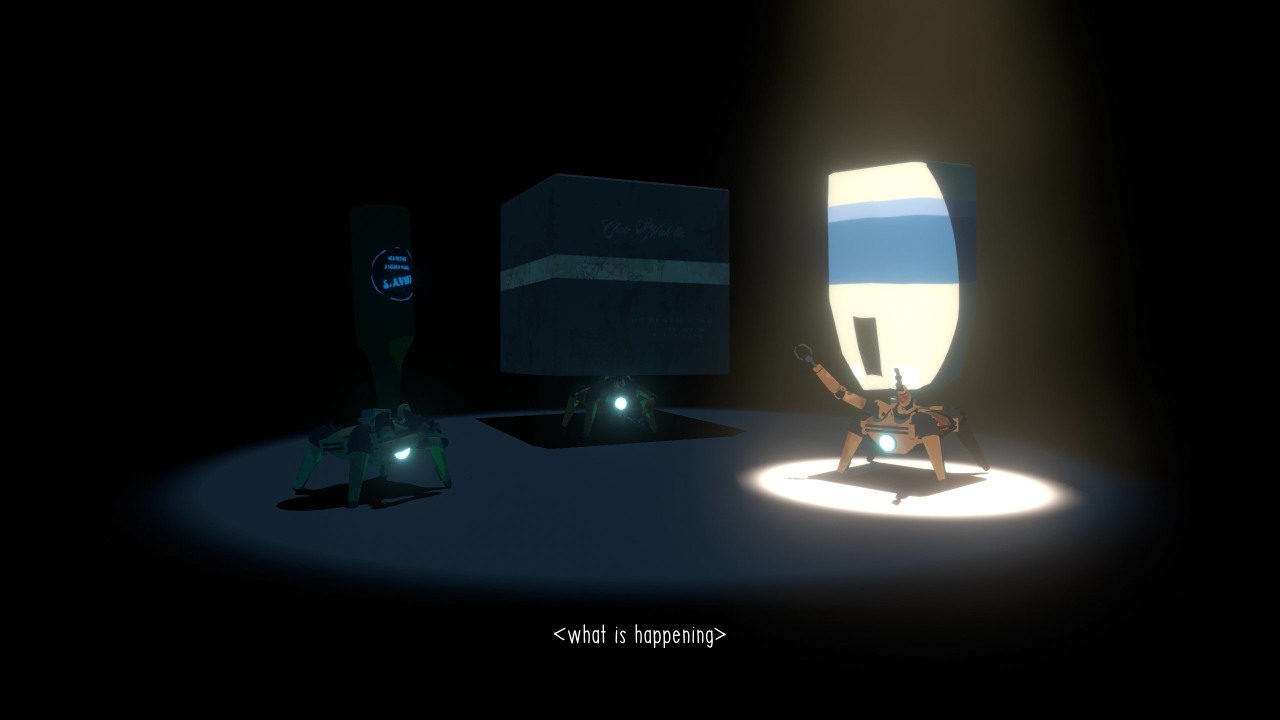 Yet another example can even be seen with one of the game’s unique features: it’s word highlighting. Put simply, it’s a kind of definition feature where certain highlighted words can be clicked on to get a further explanation. However, in Necrobarista’s case, this feature is mostly wasted. You get the occasional helpful description, but most of the time it highlights words like “friend”, “old man”, “ritual”, and “copper cable”. You click on it, and instead of a definition the game gives you a witty sentence that again, doesn’t add anything.

Things would be different if this was another one of those slice of life barkeep or coffee shop games where you kick back and take in customer’s stories and worldbuilding, but the writing doesn’t even do that. It’s literally pointless back and forth dialogue that has no further meaning beyond being small talk. I would go so far as to say that this represents about 80% of the game. This is an impressive feat for a game that is barely four hours long (especially for a kinetic VN), but Necrobarista manages to do just that. 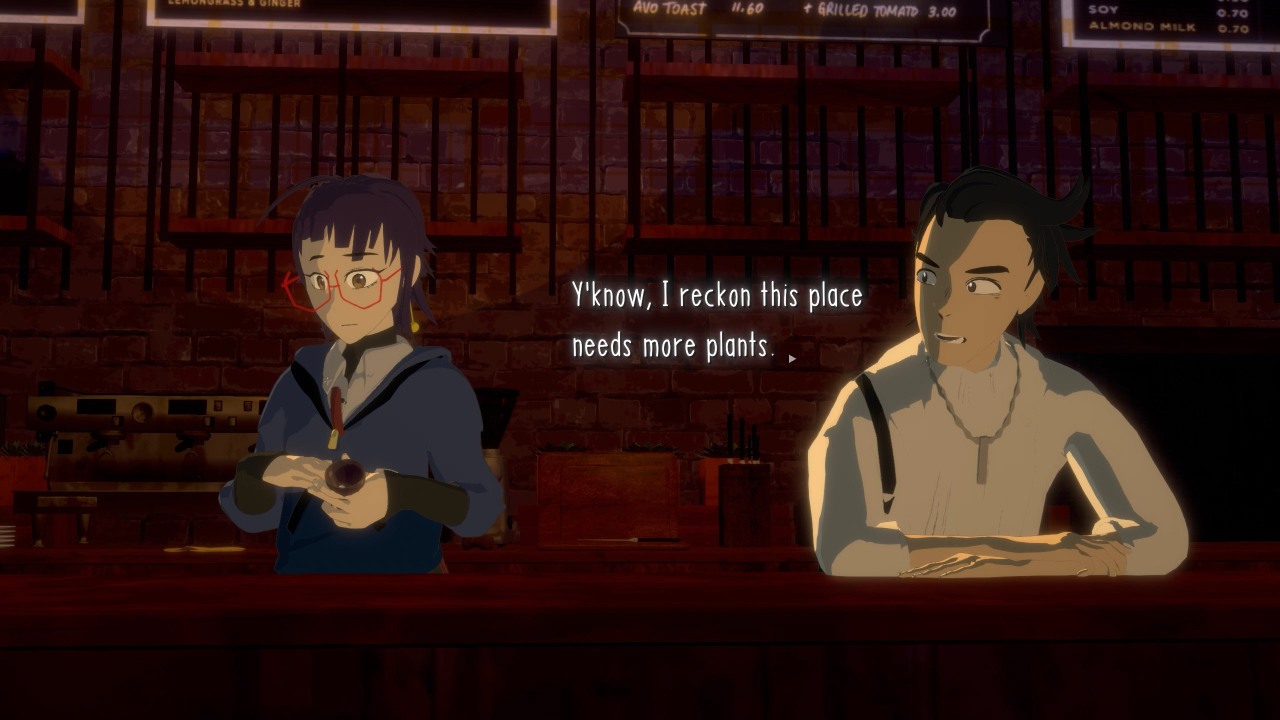 Shallow character writing. A side effect of having writing mostly made up of filler is that there isn’t really a lot of character development and this really shines in Necrobarista’s characters. There aren’t too many of them, but somehow it’s hard to tell the difference between them outside of their appearances. This is mostly because they all share this similar witty way of speaking, often coming back at each other with one-liners and memes just for the sake of it rather than to make a conversation actually funny.

The bigger problems is that the game does actually have a serious plot to it – it just doesn’t really get around to that until the very end. However, as the characters don’t see a lot of development before that point, the ending loses the impact that it was looking for. It hinges heavily on there being some sort of connection between the player and the characters – a connection it hardly spends time building. It’s not even like the pacing was bad – rather, it was pretty steady – but it’s just that so you’re so busy reading through filler that you don’t really get to know the characters outside of their one or two unique quirks.

A prime example would be the character of Kishan, who just kinda pops into the story towards the beginning and, without even doing much, somehow becomes everyone’s favorite guy despite having almost no personality. There are two scenes that come to mind where he got at least some development, but nowhere near the amount to warrant being such an important character towards the end. If anything, I’m just disappointed. The game has some really good ideas with its theme and all, but it just doesn’t explore them. 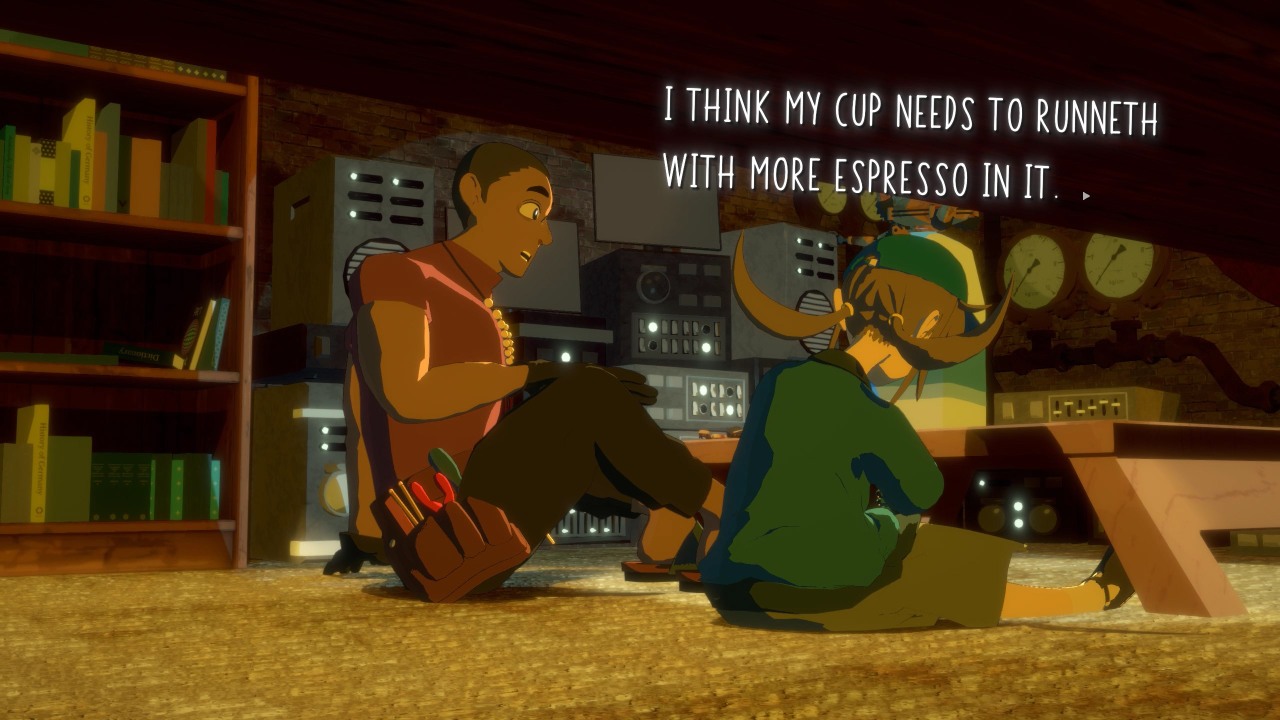 Minor technical and design issues. Aside from the major issues with its writing, I had a running list of minor annoyances that I feel are important to mention. First up is with the visuals, which, while having some nice presentation, have this odd flickering issue at times. It’s nothing too major, but every few minutes I would notice some part of the environment or some character black out of existence for a second or so before popping back in.

The second is a bit more of an annoyance and it comes in the form of how the game presents its text. There’s no auto-mode, so you have to advance every line, but a lot of the times these lines are just a few words and it becomes a bit of a pain hitting enter every second when an auto-mode would easily solve that and make the game more cinematic.

My final complaint here is with the game’s FPS. Because yes, this game is not a straight-up visual novel and actually has some walking segments between the VN scenes. The problem being that these segments run at like 30 fps in spite of the game’s low-res textures and flat graphics. They don’t last too long, but it was worth mentioning regardless. 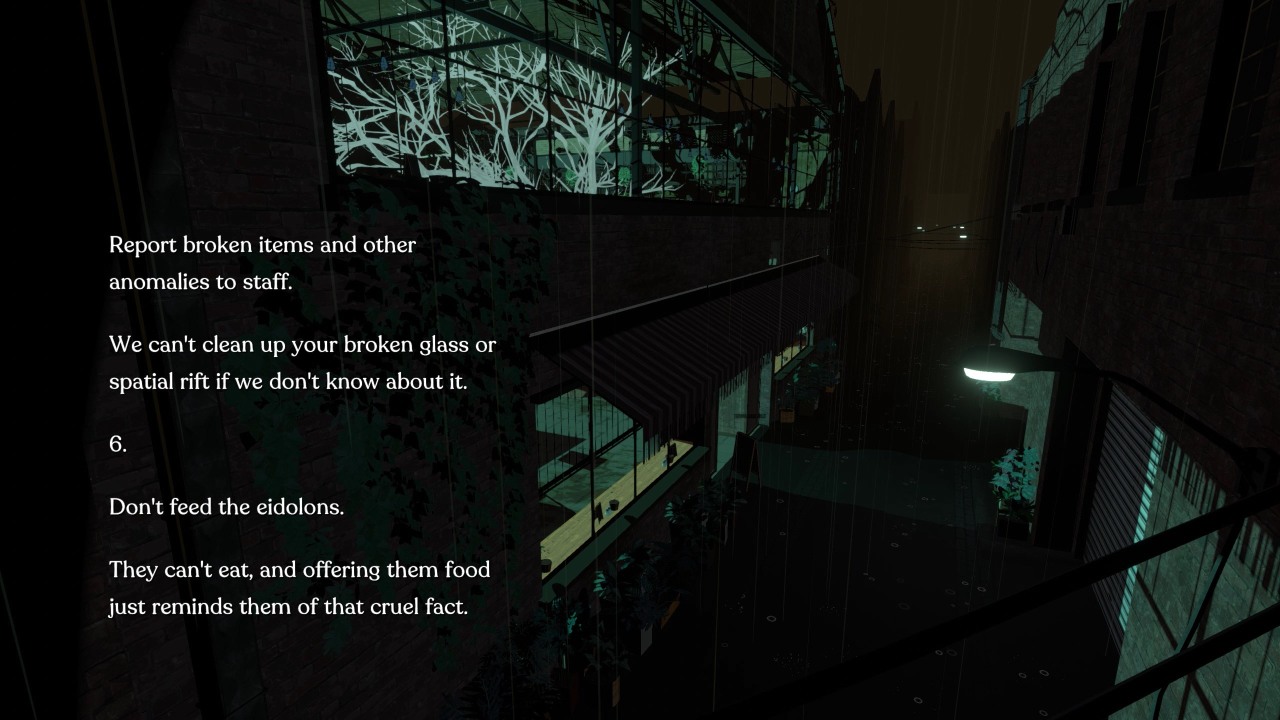 Necrobarista may have some nice visuals and music, but the plot is simply not there, killing an otherwise cool visual novel. It has some good ideas, but instead of exploring them, it instead spends more time subjecting the player to useless dialogue scenes, filler side stories, and an ending that doesn’t have any impact because the characters never got any development. It is a prime example of “all style and no substance,” and it honestly hurts me to say that because of how much I was looking forward to it.

Quote: Necrobarista is a prime example of “all style and no substance”. The visuals and music are fantastic, but the plot simply isn’t there, killing an otherwise cool visual novel.

You can buy Necrobarista on Steam here. The game is also available on the App Store and has a Switch and PS4 version planned for release sometime this year.