So for those that don’t know, Shiren is one of the original Mystery Dungeon games, before any of the Pokémon spin-offs were a thing. In fact, the first Shiren game came out all the way back in 1995. So here we have an updated version of the 2010 release The Tower of Fortune and the Dice of Fate, the fifth Shiren game overall and the first time the series has made an appearance on PC.

Let’s start with the gameplay. You start each run by entering the Tower of Fortune with the goal of reaching the very top – the end of the game. Each floor has a randomized layout with a bunch of enemies, items, and other little secrets and stuff scattered about. The gameplay is turn-based, with each movement and action using a turn. Equipping an item, for example, uses a turn and allows enemies to advance one tile, as the movement is grid-based. If you’ve ever played a Mystery Dungeon game, you’ll know what to expect here.

Shiren, however, adopts a more traditional approach to the roguelike genre: that of high difficulty and punishing gameplay. You start each run at level one and when you die, you not only lose your level progress, but all of your money and your entire inventory as well, effectively resetting your progress back to zero. It’s pretty brutal, but there are a few things you can do to lessen the impact. For one, you can stock up on items to auto-revive while in dungeon or offer an escape upon collapse. Additionally, you can pay certain NPCs to “tag” items in your inventory to be retrieved from the dungeon upon your death.

This is good because each weapon and shield has its own specific level and, if managed effectively, you can power level that one weapon or shield and keep it through future runs even if your level resets. In fact, this is pretty much what you are expected to do as otherwise you stand no chance at the higher floors. The difficulty may sound frustrating, but the options here were enough that it never felt like I was at a complete loss.

Aside from the difficulty though, Shiren has a ton of gameplay depth. This is the kind of game where you are constantly discovering new things, whether they be items and enemies, or entirely new mechanics. What’s cool is how all of these interact with one another. For example, I could pick up a weapon and sell it for its value the next time I find a shop in the dungeon, or I could hold it until I find a synthesis pot and combine it with my main weapon to further its stats. Or maybe I’ll run into an NPC who offers to take my weapon and upgrade it on the promise of returning it at a later floor. 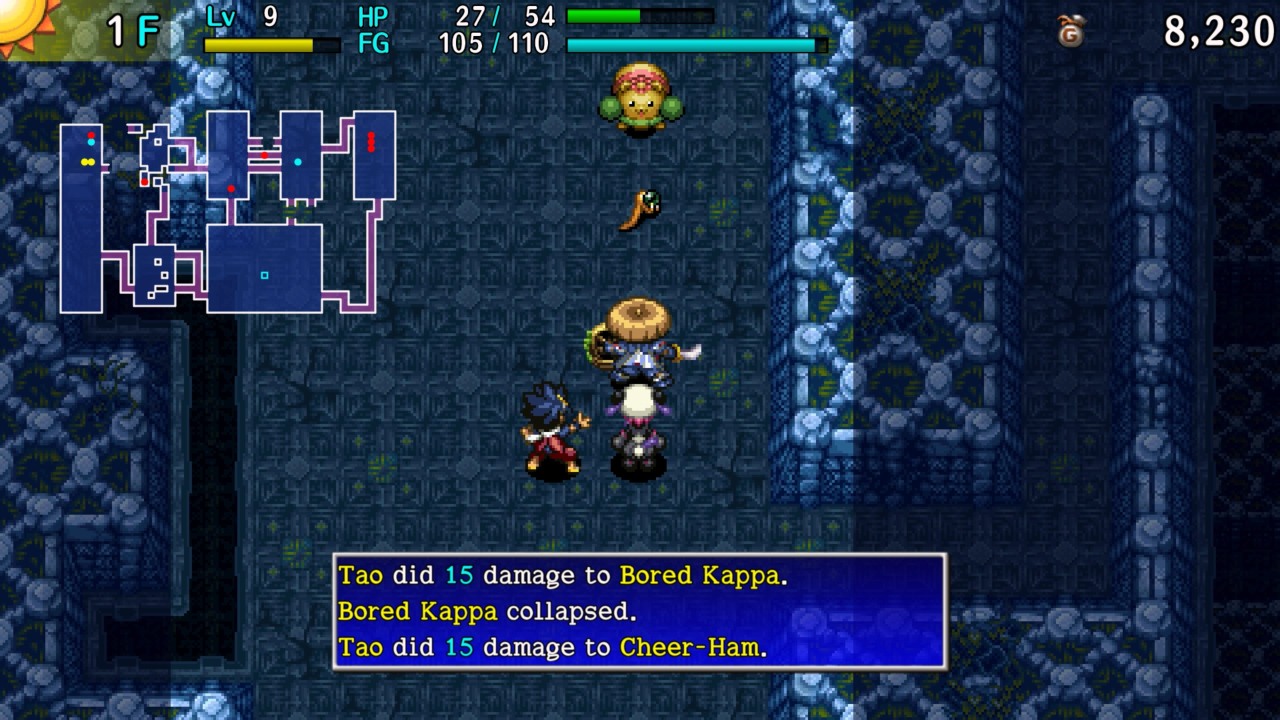 Then you’ve got day and night cycles, ability slots, ranged weapons, magic, companions – it’s honestly a bit of a strategy game with how much you have to keep in mind while playing, but that’s really where it shines. The sheer depth behind the pixel graphics is what I’ve come to love about the Mystery Dungeon series. And while on the topic of graphics, I quite enjoyed what was offered here. They’re simple, but effective for this type of game and honestly a bit nostalgic. The music too, it really brought me back to the days of PSP and DS RPGs, and I mean that in the best possible way.

However, the game isn’t without fault. The core gameplay itself is fun, but inventory management is not – and that is something you are going to be doing A LOT of. You get 20 inventory slots and that’s it. Given that those slots can be filled up in just a few floors, you’ll quickly find that a lot of the game is shuffling around items, figuring out what to take and what to leave behind, and really just staring at a menu for minutes at a time. You can expand your inventory through preservation pots (which can hold up to five items), but you still have to shuffle items in and out of these pots from both the ground and your base inventory. It’s not enough to ruin the experience, but the inventory management was definitely a pain. 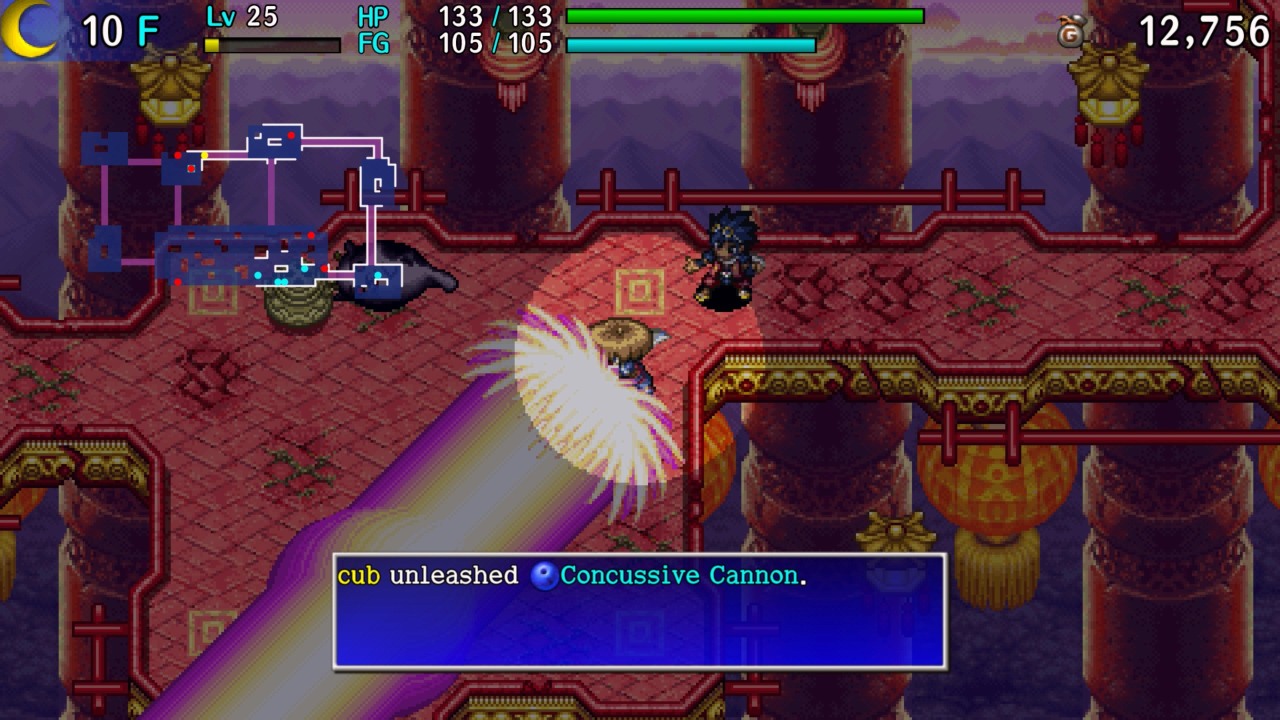 That and the PC port is also not the best. Although it runs at a smooth 60 fps at 1440p, there are a number of smaller issues that really add up. For one, when the game is running in borderless window, you’re able to drag the window around with your mouse, which doesn’t sound like a problem at first until you accidentally do so and can’t reposition it perfectly. I had to fully restart my game a few times due to this.

Then you have the controls, which are all over the place. I wasn’t a fan of the default keyboard controls (which cannot be rebound and are limited to three layouts), so I opted for an Xbox controller, but that also has its issues. The right stick is supposed to let you look around the map freely, but in its current state it simply doesn’t work. It goes off in random directions, sometimes the opposite of what I input, but sometimes it does do the right input, I honestly have no idea what it’s doing. The PS4 controller is worse in that the button settings do not appear to do anything and don’t match up with what is in-game. Oh, and the right stick does not work there either.

I also ran into a grand total of one crash, which happened at the same time my controller ran out of charge, so it might have something to do with controller disconnects.

However, if you can get over the technical issues and the rough inventory management, there is a fun game here. Complex mechanics, classic roguelike gameplay, cool graphics – it’s not a bad game, it’s just a game held back by a less-than-stellar PC port. I would recommend it, but it might be worth waiting for a few patches first. The game currently has a beta branch testing some fixes, so you might not even have to wait that long. If anything, I’m excited to see if this paves the way for more Mystery Dungeon on PC.

Quote: Shiren 5 is a fun Mystery Dungeon game currently held back by a less-than-stellar PC port. Recommended for fans of the series but may be worth waiting for fixes first.

You can buy Shiren the Wanderer: The Tower of Fortune and the Dice of Fate on Steam here. The game is also available on Switch.