So here we have another interesting blend of genres. This game is not only a side-scrolling action platformer, but a farming sim on top of that – or rather, a rice farming sim. I’ve always been a fan of these unique genre mashups, and even more so interested in this one considering it comes from the same devs behind the excellent Astebreed.

Let’s start with the gameplay. Sakuna is basically divided into two distinct parts: the side-scrolling action platforming and the third-person farming sim. Most of your time is going to be spent with the former, which has you going around the map and completing levels with a wide variety of objectives – whether that be simply reaching the end of the level or defeating a certain amount of enemies, each level has multiple of these objectives. Completing more and more of these adds to your exploration score which in turn unlocks more areas and progresses the game.

The actual gameplay within these levels is surprisingly fleshed out. It plays like a beat ‘em up, with your light attack, heavy attack, and special attacks that all have variations based on which direction you’re holding, similar to a fighting game. Then you got the divine raiment, which is basically a magic cloth band that you can use to grapple onto walls, grab enemies, and set up combos. This raiment has its own set of skills that can be customized to your liking as well.

Effectively combining both the raiment and your other moves in combat is the key to victory and there’s a lot of depth in the different combos you can set up. Once you get the hang of things, you’ll be zipping around with the raiment, flipping enemies over with a parry, and sending them flying with special attacks. It never got old seeing an entire line of enemies drop like bowling pins when I sent an enemy flying towards them.

However, it should be noted that this is not an easy game. Despite the game’s relatively cutesy graphics, the combat can be absolutely brutal at times. I played on the default difficulty and found myself dying over and over in some areas, especially during boss fights. It can be frustrating at times, but this is when the game’s combat really shines – you can’t just spam your way through it like other beat ‘em ups.

Aside from the combat, there’s a light touch of exploration to these levels as well. Using your raiment as a grapple, you can reach areas you wouldn’t be able to otherwise and there’s a decent amount of hidden goodies to find. The level design can be pretty clever at times, using depth to hide hidden entrances or leaving a grapple spot just out of sight that it can be easily missed if you’re not actively looking. 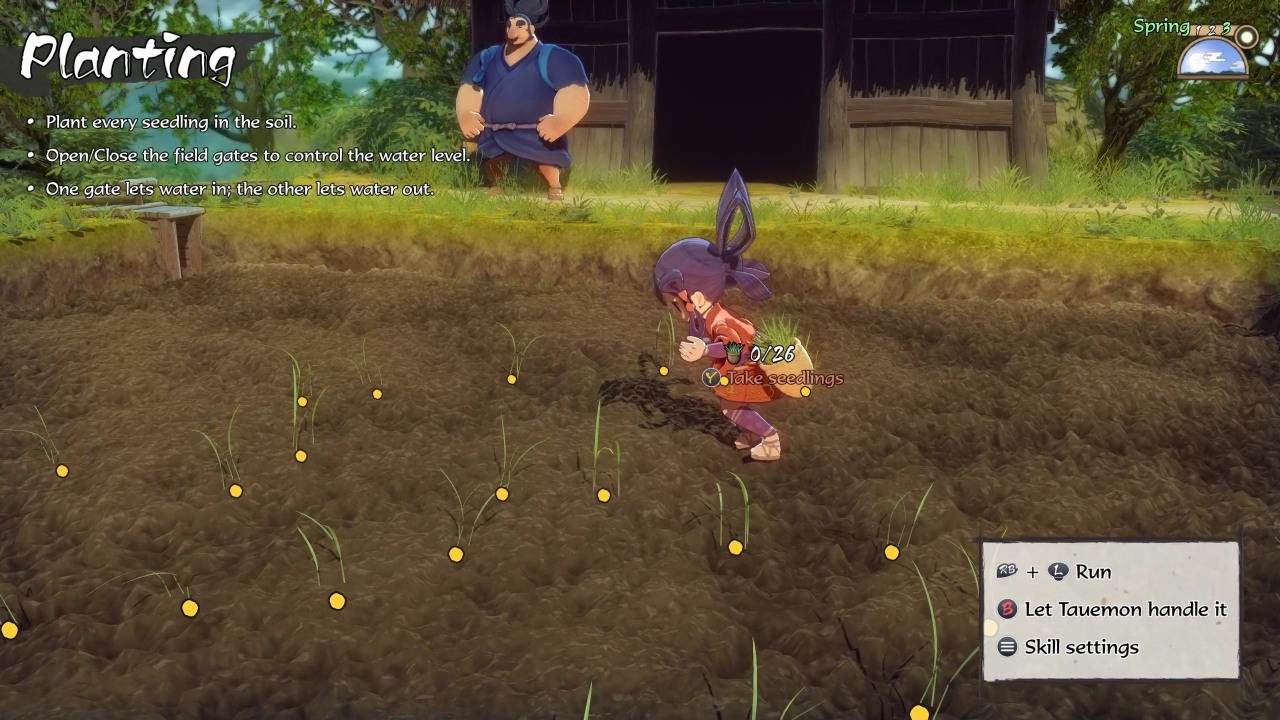 Then there’s the gathering – which you will be doing a LOT of. Smacking ore veins for material, destroying bushes, or collecting meat from defeated enemies – all of it comes into play when crafting items and serving meals. It’s comparable to an Atelier game in this sense, or at least that’s the vibe I got.

So, when you’re not going through these side-scrolling levels, you’re going to be doing some farming or engaging with other characters at your base. The farming, as with the combat, is surprisingly more complex than what I was expecting. Although you’re only dealing with rice, you have to manage that rice through all stages of its growth, including tilling, planting, managing water level, laying fertilizer, harvesting, drying, threshing, hulling, and finally – serving. It’s a complex process for sure, but it’s not complex in the way that makes the combat fun.

A lot of these steps, like threshing and hulling, are really just you repeating the same few button presses or movements over and over – oftentimes for minutes straight. You eventually pick up farming skills that speed up the process, but it never removes that sense of tedium. And you have the option of delegating some of these tasks to your NPC buddies, but the game discourages this by reducing the rice quality every time you do so. I mean, I get it, rice farming is a tedious process, but it’s such a stark contrast with how fun the side-scrolling parts are that the point needs to be made. 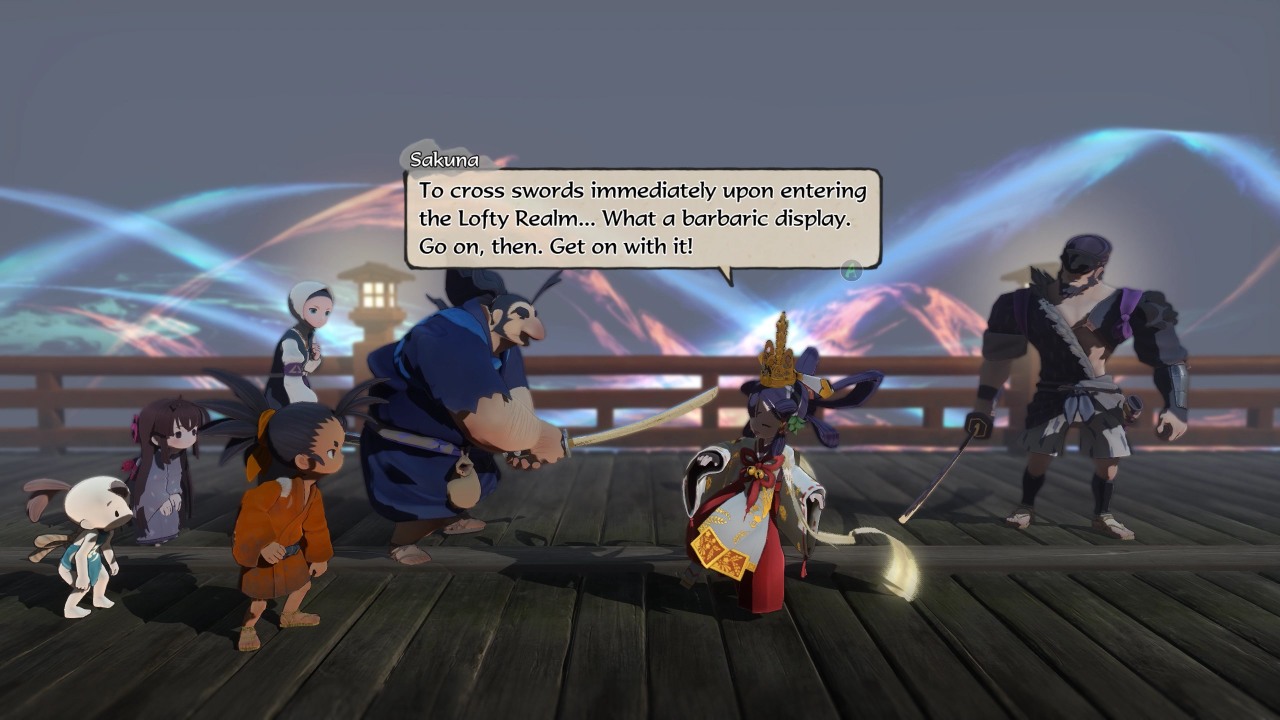 And as for the story, it’s definitely not bad. Sure, it’s not gonna blow your mind or anything, but for the type of gameplay here it’s a pretty good fit and I liked the way they incorporated Japanese mythology. The balance between the more serious story stuff and the comedic stuff is expertly done as well and the characters all have their own little quirks that keep conversations interesting. This is important because there is quite a bit of dialogue to the game – with dinnertime conversations being an almost daily occurrence.

Graphically, I don’t really have any complaints. The game looks great both during the 2D and 3D scenes, with nice character models, plenty of detail, and a bunch of cool weather effects that affect all of the game’s levels, not just the hub world. The traditional Japanese music to match these graphics was a nice touch as well.

Overall optimization and polish are good too. I had no issues running the game at 1440p 155fps and never ran into any crashes, freezing, or other major bugs. I wasn’t really a fan of the keyboard and mouse controls, – although I ended up using a controller in the end. EDIT: The keyboard and mouse controls are not fully rebindable, my mistake. It’s the controller controls that are rebindable!

So with that said, I would say that Sakuna: Of Rice and Ruin is worthy of recommendation. The bulk of the game – that is, the side-scrolling action platforming – is some really well-done stuff, with fun and complex combat, great level design, and some actually challenging boss fights. The farming side to the game – while good in some areas – ends up just falling into a tedious cycle. Again, this is expected from a farming sim to at least some degree, but it didn’t really click like others in the genre do. Fortunately, the rest of the game more than makes up for it, so do give it a look if you’re interested.

Quote: Sakuna: Of Rice and Ruin may falter in some areas, but the action-platforming is some really well-done stuff, with fun and complex combat, great level design, and actually challenging boss fights.

You can buy Sakuna: Of Rice and Ruin on Steam here.