What better game to review for Halloween than the latest entry in the very popular Amnesia series. Despite it being the third game in that series, there’s little link to the first game and no link to the second, so it seemed like the perfect time to jump in as someone that has yet to finish those two.

So let’s start with the gameplay. Rebirth plays very much like any other first-person adventure game. You’ve got objectives to head to and a variety of obstacles to overcome, oftentimes taking the form of environmental puzzles. These puzzles can be anything from “how do I cross this ledge” to “how do I blow open this door”. However, it’s more 50/50 on whether these puzzles are implemented well or not. Half the time, you get some clever puzzle design that actually makes sense within the world and story and the other half you get these completely ridiculous puzzles that come off as filler more than anything.

That “blow the door open” puzzle I mentioned previously falls into the latter category. To solve it, you need to utilize an abandoned tank (that is somehow still operational) and literally shoot the door open. Sounds simple enough – even if a bit over the top – but to actually do so, you first need to craft a tank shell. Yes, that means you must hunt around the area for ingredients, including sulfur, saltpeter, and charcoal. This kind of puzzle just feels unnecessary in a horror game like this, especially so given that there are far more logical ways to solve the same puzzle without breaking immersion, like – I don’t know – a ladder?

I will give the game some credit though, that puzzle highlights one of its positives – its setting. You start the game with a plane crash in the middle of a desert and have to work your way through it to escape. Of course, this will involve caves, old villages, an abandoned fort, and the like. It’s a very unique setting for a horror game, much more interesting than the hospital, castle, or spooky manor that we usually get. So on that front, the game does a pretty good job. That is, until around the halfway point though.

Once you’re past that point, you pretty much spend all of your time in this boring, dark alien world. The rooms look identical, there are tons of hallways, and the lack of imagination on the level design front becomes increasingly more obvious. Sure, it’s far easier to make a horror game from such a setting, but that’s exactly what the first half of the game had going for it – creating horror in a way that’s actually unique for the genre.

Then you got the story. I won’t make the argument that it’s a bad story – rather, it’s just kinda predictable and mediocre – but the game really shoots itself in the foot by telling it in the most ham-fisted way possible. The vast majority of it – like 70% – is told through notes, letters, tablets, and other bits of writing. Normally, these can do a great job in elaborating on backstories or adding lore to the game, but that is when it is used as supplemental material – not constant interruptions like they are here.

What makes it worse is that a lot of them hardly add anything to the story – or lack the context to do so. The mountain of tablets that attempt to describe the lore of the alien world mostly fall into this category. They are lengthy, but they’re often cryptic, use terminology that means nothing to the player, and are hardly of any interest given how predictable the story becomes at that point. 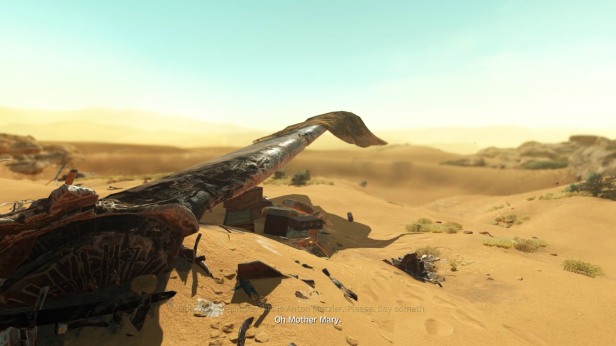 And on the topic of interruptions, it isn’t just the notes and such that do so. The game itself has plenty more in the form of random flashback sequences and constant dialogue flowing from the protagonist. In fact, this is one of the few games where I think the protagonist talks too much. There’s nobody else around, but this protagonist is constantly talking to herself, often ruining immersion during the game’s horror sequences.

Her dialogue is often used to give the player direction as well, even in areas where it is not needed. I’ll have a big bad scary monster chasing me and she’ll let out lines like “I need to get away” or “this can’t be real”. I mean, yeah, I get it that she’s scared, but I don’t need to be constantly reminded of it, especially when one of the game’s biggest draws is its supposed immersion.

And before I close this out, I should mention the technical aspects. I’m still on a 1070 Ti, but I had no issues playing through the entire game at 1440p with maxed out settings. I didn’t really run into any frame drops or other technical issues, it was pretty polished overall – although the graphics definitely aren’t pushing any boundaries. However, I was disappointed that the whole thing was locked at 60 fps. We’re nearing the end of 2020, is it really that hard to develop games with unlocked framerates in mind?

Given all of that, I cannot recommend Amnesia: Rebirth. It has its positives – mostly its early setting and overall horror mechanics – but the negatives vastly outweigh them. The setting and level design take a nosedive, the puzzles can be a bit iffy, and the story, while not “bad”, is told in one of the worst ways possible. The protagonist as well – who starts off strong – becomes increasingly less likeable as the game goes on, with constant, unnecessary dialogue ruining a good bit of the immersion. It might be worth a look for fans of the series, but there are far better horror games to choose from.

You can buy Amnesia: Rebirth on Steam here.