Take Minecraft and The Escapists, slap them together, and you get something like The Survivalists, the latest offering from Team17, the studio mostly known for the Worms series. It bills itself as an online co-op survival game, and as someone that has played a mountain of those, I had to give it a look.

So I feel like something needs to be said about what to expect from this game before people get the wrong impression. The Survivalists is much less a full-on, difficult survival game, and more like a casual adventure game. In all of my hours playing it, I only died once and never had to struggle for food or any other resource I needed to survive. It’s like a much more laidback take on Don’t Starve Together, with simplified survival mechanics, but other cool additions to make up for it.

On that front, the game does a great job. The base-building is fun, the crafting system is well-made and doesn’t feel like it was tacked onto the experience, and the added focus on treasure-hunting and tomb-raiding is definitely cool too. Yes, a large chunk of the game is building up your base and setting up crafting systems and whatnot, but the occasional break from that to go explore a tomb on another island, solve a treasure map, or visit the traveling shopkeeper does keep the experience fresh. 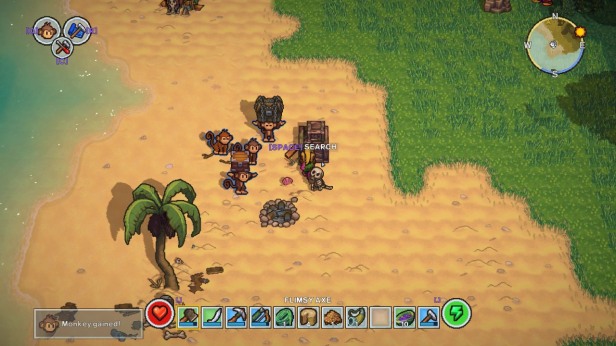 The monkey mechanic in particular is very cool. With it, you can acquire monkey followers and train them to do a variety of things, including gathering resources, crafting stuff, or even helping you clear tombs of enemies if you give them a weapon to work with. You can even set up entire chains of automation, having one group of monkeys chopping down trees, another group transporting the drops to chests at your base, and then another moving that material to crafting benches for quick and easy crafting. This mechanic may have its faults (which I’ll discuss shortly), but it’s a great addition at its core and definitely added to the experience.

And on the topic of adding to the experience, the graphics and music do just that as well. The former is simplistic yet is the perfect match for this style of gameplay and looks great in motion. The lighting system looks great on top of that, and that becomes very apparent when you’re exploring dark caves or tombs with a torch in hand. The music is a bit more mellow – more atmospheric – but does equal work in giving the game its unique aesthetic.

So that sounds good and all, but one of the game’s major pitfalls is quality of life features. I’m talking stuff like not being able to pick up more than one item at a time, not being able to easily set monkeys to do certain tasks and instead having to reteach them every single time, and even more minor things like being forced to hold down a button instead of pressing it to acknowledge a popup. The game is rife with such quality of life hiccups, and it can oftentimes make it feel annoying to play.

For example: crafting recipes are not shared between players in the same world, so when I was playing with a buddy, we both had to craft each item in the game ourselves despite living in and building the same base. Another prime example being that the button to pick up items is the same button used to give an item to a monkey. This is super annoying when you are spamming spacebar to pick up a bunch of items and accidentally give a random monkey next to you the item in your hand, forcing you to figure out which monkey took it as that is not represented visually without accessing the monkey command menu.

And then you got the problems with teaching monkeys and not being able to assign them specifically to certain areas and whatnot. Really, the entire monkey mechanic in general could use a quality of life upgrade, as it just doesn’t feel like it wants to cooperate at times. I would go further and say that the lack of such quality of life features is enough to warrant waiting for patches before considering the game.

So, while I did have fun with the game, I would say it’s only worth a light recommendation. The core gameplay is fine, and the multiplayer was a good experience, but the lack of quality of life features really holds it back at times and it’s probably worth waiting for updates before considering the game at full price. If those get patched in and maybe the game receives a few more content updates, it would absolutely be worth a look. In its current state though, I’d advise waiting for a sale first if the updates don’t come anytime soon.

You can buy The Survivalists on Steam here.