Nearly a year after its initial release on PlayStation 4 and Nintendo Switch, Disgaea 4 Complete+ has now finally made its way over to PC, on Steam and Game Pass at that. It takes all previous Disgaea 4 releases and combines everything into one nice little package, perfect for those that never got the opportunity to play it beforehand, myself included. I enjoyed my time playing through Disgaea 5 a couple years ago, so I thought I’d give this one a look as well.

Fun, in-depth tactical gameplay. I may not be a big fan of the grind, but I keep finding myself back at this series for just how fun its turn-based tactical gameplay is, and Disgaea 4 is no exception to that. A quick tutorial was all I needed to get going and before long I was tossing stuff around the map, building character towers, setting up complex multi-attacks, and optimizing my turns in such a way that I could clear a good chunk of each stage before the enemy even got a move in.

For example, I would begin a level by scoping out where the enemies were and would form a line of characters to toss others around in such a way that my biggest damage dealer could eliminate as many as possible in the first move while simultaneously setting up a defense for the enemy attack and maybe even messing around with the geo panels and geo blocks on the stage.

It’s a complex game for sure, but it’s only as complex as you make it. You can just as easily power through each stage with high-level characters, but there’s a lot of fun to be had in strategizing and optimizing, the true core of the Disgaea experience. In fact, you’re encouraged to do so via the game’s bonus gauge, which gives you rewards based on how many combos you land and how you handle the geo panels and blocks on each map. Bottom line though, the combat is just fun to play around with – and honestly, it carries this series for me. 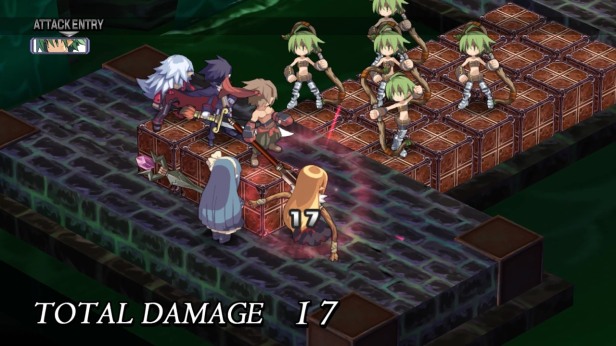 Nearly infinite customization possibilities. As with others in the series, Disgaea 4 is a game ripe with customization. Character class, skills, stats, evilities, equipment, XP rates, enemy strength, you name it, you can probably customize it in some shape or form. It wouldn’t be wrong to say that there’s no end to such customization, especially when you consider party composition and mechanics like the item world – which lets you dive into an item to complete randomized levels with the goal of increasing the item’s level and therefore its stats.

As with the combat, there’s an equal amount of depth applied to how customizable the experience is. Take the Cam-pain HQ mechanic for example. Here, you’re able to align characters and structures on top of a map, with their positions granting certain buffs and other abilities. The training ground can grant shared XP, while the heart cannon allows the linked character to follow up on other characters’ attacks, allowing for double and even triple attacks if set up properly. That’s just one mechanic though, there is a lot more to the game and I could easily write an essay on that topic. When you combine that with the in-depth combat, you’ve got quite the package already.

Tons of content to play through. When they say Complete+, they’re not just messing around. There is a ton of stuff to this game, from the countless levels already in the base game, to the mountain of DLC content added on top. You’ve got all the content from the base game (released back in 2011), all the content from the Vita re-release (released back in 2014), and then all the changes from Complete+ on top of that (released in 2019). It’s almost an entire decade of more and more content added to an already fun game. 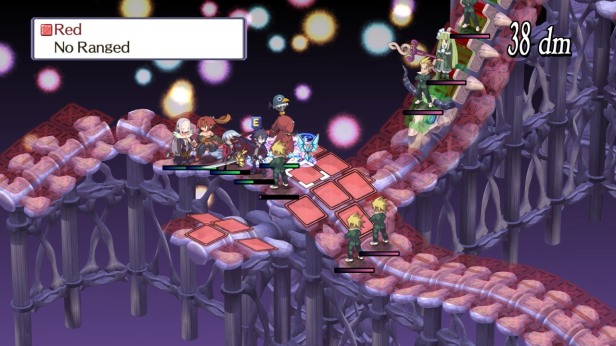 In fact, for a series usually known for its grinding, I had this entire 25-hour long main story to play through before I even reached the point where the grind kicked in. One could even argue that the real experience doesn’t start until after that point, with the amount of content and other stuff you get access too. For those that like to grind, I can easily see hundreds of hours of stuff to do here.

And of course, the nice little touches that Complete+ made on top of the base game are nice too, including stuff like auto-save and skill speed adjustments. If anything, the game definitely lives up to the title “Complete+”.

Solid PC port. I know people like to dumpster on NIS America for their localizations, but I gotta give them credit where credit’s due – I had no issues with the Disgaea 4 Complete+ PC port. It ran at 1440p, never dropped frames, never crashed, and didn’t really have any bugs outside of the occasional odd audio spike or two.

There’s even customizable button prompts, multiple language support (both spoken and written), and actual keyboard and mouse support, none of that cheap stuff we usually get from such ports (looking at you Koei Tecmo). Really, the only complaint I have here is that the game is locked to 60 fps. It would be nice if they could have targeted something higher, but for a game that is almost 10 years old, I’ll let that slide for now. 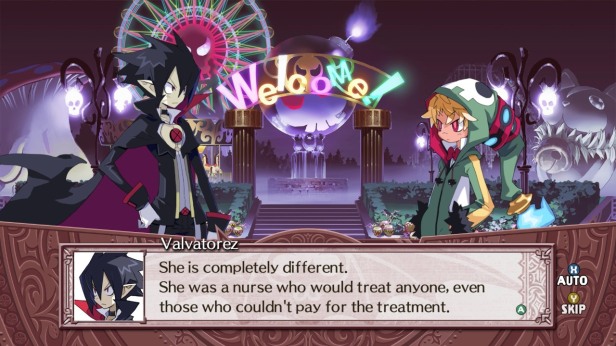 Tedious equipment management. As I played more and more of Disgaea 4, I noticed that I was spending more and more time micromanaging my party’s equipment and abilities. It reached the point where it felt like I was spending more time doing that than actually playing through the levels. This may sound like a personal issue, but the game is designed in such a way that it practically forces you to do so. Nearly every new level, you acquire new weapons, new accessories, and other items that get thrown into your item bag. These items often have better stats and therefore should be equipped.

Say I get a nice armor piece. I would open the equipment menu, compare its stats against the current set of armor my top character is wearing and swap it out if the new one is better. I would then have to take that set of armor I just unequipped and compare it to the set being worn by my second-best character. This process would continue until I’ve gone through my entire party and shuffled around the armor as necessary, but then it would repeat for the next item and so on. It’s a long and tedious process, so much so that I actually limited myself to only doing it once per episode.

This is bound to happen in a lot of JRPGs, but it was such a problem in Disgaea 4 that it really interrupts the flow of the gameplay. The fact that the UI is so cluttered and not really that easy to navigate definitely does not help either. If anything, this is a prime example of a game that needs an “auto-equip” feature. 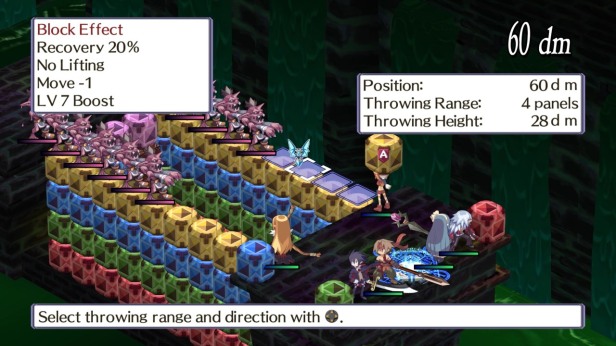 Annoying geo block mechanic. While the combat may be fun, the game has a bit of an issue when it comes to its geo panel and geo block mechanics. The former is fine and can even add to the experience in some levels, but when you add the blocks on top of that, it can become a bit annoying. For example, you’ll enter a level that has a really cool layout and some tough enemies to fight, but in order to even engage with those enemies, you have to juggle around some geo blocks to remove “no entry” panels and the various enemy buffs scattered about.

So instead of actually fighting the enemies, I would have to spend a few turns tossing blocks, destroying them, tossing some more, and so on until I’m free to move around the level and fight enemies that aren’t receiving ten buffs. Some of these can even be time sensitive, such as the panels that clone enemies every turn or increase their level every turn. It’s not all levels that do this, but there’s a large chunk towards the center of the game that it made it feel like I was playing a puzzle game rather than a turn-based tactics game – you know, the good part about Disgaea.

Subpar storyline. I can’t say that I expected the story to be any good here given my experience with Disgaea 5, but I was still disappointed regardless. At first glance, Disgaea 4’s story looks to be an outright parody on the usual JRPG tropes and story structures, but it actually tries to tell a serious story at the same time. If you take away the comedic bits, you’re just left with another generic JRPG story that starts off small, but becomes ridiculously ambitious towards the end. In fact, you could say that it falls victim to the same JRPG tropes and such that it tries to parody. 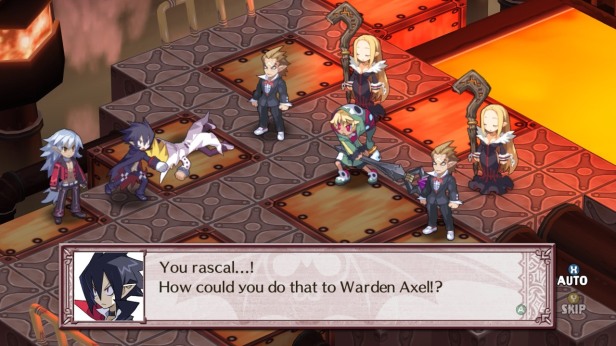 Outside of that, the story itself has some minor issues with pacing, a bit of filler content to pad the gameplay, a cast of mostly one-dimensional characters, and an overreliance on certain jokes to the point where they simply aren’t funny anymore. It’s like the comedy side to the story was inserted to cover for an otherwise subpar story, but given that this seems to be the usual for the series, this may not even be an issue for many. It’s a shame though, as the story takes up a significant chunk of an otherwise good experience.

Microtransactions. I don’t know why NIS America thought it would be a good idea to include microtransactions in a full-priced Disgaea game, but here we are. Complete+ includes microtransactions for level up boosters, mana boosters, and other items that are otherwise hard or impossible to obtain. You can just as easily clear the game without them (as I did), but the fact that they are even present in the first place is an automatic con – this kind of behavior from publishers is not something we need to encourage. 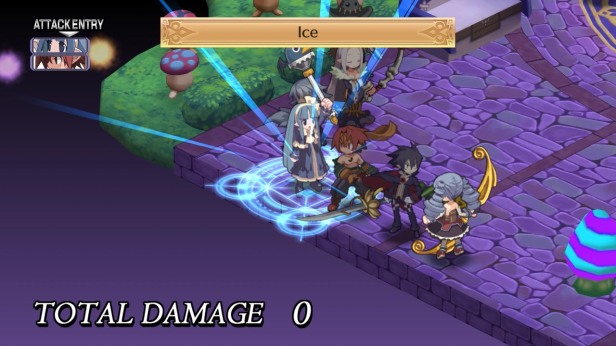 Although not quite as good as Disgaea 5, Disgaea 4 Complete+ is still a solid game and worth a look for fans of the series. It packs together a ton of content, runs nicely on PC, and has plenty of the fun combat and customization options that the series has become known for. Regardless, it does suffer from some rather glaring flaws, including its tedious equipment management, annoying geo block mechanic, and subpar storyline.

That and the microtransactions – there’s no excuse for their inclusion in a game that already cost $40 to play. That alone made me question giving this game a positive recommendation or not, but considering everything else, it’s still a good game and should be on the radar for fans of such tactics games.

You can buy Disgaea 4 Complete+ on Steam here.