If you’ve ever wanted a roguelite Octopath tactical RPG, then you’ve probably come to the right place because Star Renegades is pretty much exactly that. As a fan of all of those genres (and as someone that somehow finds himself reviewing a new roguelite every couple weeks), of course I’m gonna check it out.

As the visuals are a huge part of this game, I’m gonna start there. If you’ve ever played Octopath Traveler, the aesthetic is very similar. The world is in 3D, but all of the actual assets are sprites and done entirely in 2D. It makes for this very interesting contrast, which is furthered by the game’s heavy use of lighting, particle effects, and general ambience like trees and grass swaying in the background. Unlike Octopath though, the sprites are generally larger and with more fine detail. And of course, this is all done with a very sci-fi look and with some good optimization too. I had no issues running the game maxed out at 1440p and 155 fps on my 1070 Ti.

Then you got the animation, which the game does a really good job at. It’s already pretty good on the world map, but once you’re in a battle, it becomes very clear that the devs wanted the fights and characters to be as flashy as possible. Bright colors, lots of sprite ghosting, it’s quite the spectacle. I can see some having an issue with just how in-your-face everything is, but I thought it was pretty neat. The music, on the other hand, I didn’t really enjoy all that much, especially with how repetitive it felt. This ended up being one of those games where I would just listen to my own music. 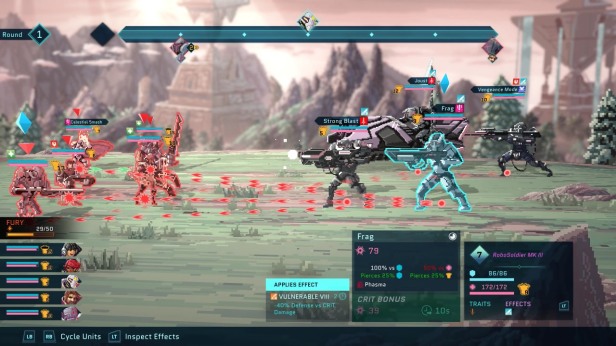 Now onto the topic of the actual gameplay, I believe it is important to set expectations here. Although the game has the JRPG tag, the vast majority of your time (like 90% of it) is going to be spent in combat. There is a game world that you walk around, but it acts more like a hub than something to actually explore. It’s broken up into sections and you have a limited amount of movements to make per in-game day, at which point some of the map gets locked out to you and you’re forced to sleep to reset the counter and continue your journey. It’s kinda similar to FTL in this regard, but with a much fancier-looking map.

Now I won’t deny that I was a bit disappointed by that aspect of the game, but that’s where the combat comes in to make up for it. And when I say make up for it, it really does, this is honestly some of the best turn-based combat I have ever seen in a roguelite. It plays a lot like a modern JRPG, with an action timeline determining when characters can get their move dependent on what action they take. You’re able to abuse this timeline too, including the ability to delay enemy attacks by attacking before them or even outright staggering them into the next round, although the game does place a hard limit on how often you’re able to do this before an enemy ignores it.

That’s just scratching the surface though, there is a ton of depth to the combat here. You’ve got the multitude of different attack types, tons of buffs and debuffs to apply, combos that can be done between party members, and a card system that allows you to apply upgrades and passive abilities before you even enter combat. Honestly, it felt like I was playing a strategy game with just how complex it was, and that’s before you consider the countless combos you can form by matching up different classes and items equipped on each. There are 13 unique classes to choose from that you unlock over the course of the game and I had a lot of fun experimenting with different setups and trying to find that optimal combo.

And you’ll want to find that combo, as the combat in this game can be outright brutal at times. I thought I was doing pretty good on my first run only to get absolutely shredded by the second boss after spending a couple hours in that run. It took me four runs to finally get through that boss, only to then reach the third and get shredded there instead. It can definitely seem unfair at times, especially when a boss has damage reflect or is able to attack twice in one turn, but that’s just the kind of difficulty the game goes for.

As the game is a roguelite, you have to restart the entire thing from the beginning every time you die, but there is a sense of progression in that you unlock new upgrades, weapons, and classes each time. The runs are longer than what I’m used to from the genre (around 2-3 hours), but with each run I found myself getting closer and closer to that final area and it never felt like I was just outright stuck.

Now before I close this out, I gotta mention the UI. Although I am fine with how flashy the combat is, the UI doesn’t really make things easier. There are tons of icons, numbers, and other elements all over the place and it’s honestly hard to keep track of everything. This is especially noticeable when a unit has like 10 buffs on them and the UI elements cover a good third of the screen. Some tooltips would have been very helpful in alleviating this issue, but honestly, the game could just use an overall UI rework instead.

Overall though, Star Renegades is still a very fun game. It looks fantastic, has a ton of room for experimentation, and has some of the best turn-based combat I’ve seen from this genre. I had a blast trying out different party setups, optimizing each character’s loadout, and finally taking down those tough bosses. The game could use improvements in some areas (most notably with its UI), but it’s a fun experience regardless and one I would recommend if you’re into turn-based RPGs.

You can buy Star Renegades on Steam here.