Sailing, survival, exploration, crafting, story, Windbound has a lot going on. In fact, one could say that it maybe has too much going on. The question is though, is it able to combine all of these without losing that fun factor?

So I’m gonna start with the game’s graphics, as that is something it does really well. It’s got that Breath of the Wild look going for it, with tons of bright colors on top of cel shading. There isn’t a lot of fine detail, but the studio has done a good job at really making the environments and the life on top of them pop. This is even evident in the water, which may not be Sea of Thieves-level quality but is still some of the best I’ve seen from a survival game like this. And it does this while running at 1440p 150+ fps, so it’s definitely an optimized game if anything. Then you got the atmospheric music to tie it all together, with the sailing theme in particular being my favorite.

Now the gameplay is where the problems start appearing. I want to say that Windbound is just a survival game, but that’s not really the full picture. Sure, it is a survival game at its core, but it’s also an RPG, an adventure game, and even has some roguelike mechanics thrown in there. The problem being that it doesn’t really do any of these well. Despite the guise of being a survival game, your goal is actually to follow along this linear, cryptic storyline that has you sailing between islands, activating pillars, and then going through a portal to the next set of islands to repeat the same process.

It’s already a pretty boring process, especially considering that there isn’t really anything thrown in there to shake things up. Of course, that’s if you exclude the survival mechanics, which feel like they were mostly incorporated to increase the length of the game rather than to add anything meaningful to the experience. While the goal may be to activate these pillars and progress along this story, you’ll have to make numerous stops along the way to find food, stock up on supplies, and ensure that your character doesn’t die of exhaustion.

Yes, that’s core to what makes a survival game work, but when your character needs 5+ meals a day just to keep going, it does become a bit annoying. Food expires over time in your inventory, so it isn’t like you can just stock up on it, you have to constantly visit islands just to hunt for your next meal. And in order to get those meals, you’ll have to engage in the game’s awful combat mechanics. You would think that a survival game would put in a bit of effort there, but here in Windbound, the combat is pretty much just “attack” and “dodge”. Attacking is simple enough, but dodging can really feel clunky at times, and it often felt like I was getting hit by attacks that I should have easily been able to dodge in time. The finicky lock-on feature is definitely not helping either. 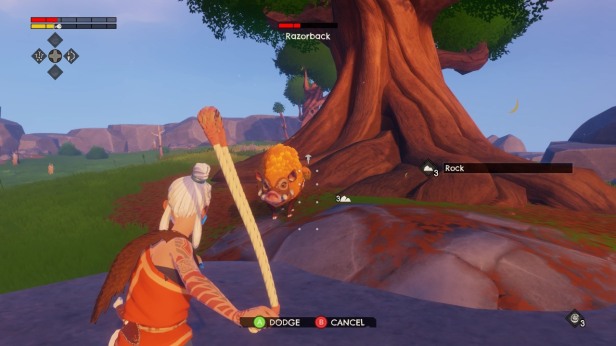 What makes all of this even worse is that, if you do end up dying because of the clunky combat (or any reason for that matter), the game hits you with the roguelike classic of restarting the entire thing over again from the very beginning. And no, not just the beginning of the area you are in, but the very beginning of the entire game, losing your boat, story progress, and contents of your inventory in the process. Normally, in a good roguelike, there is some sort of progression here to make the next run easier, or at least make it feel at least somewhat different from the last run, but in Windbound that is simply not the case.

I could go several hours and make some really good progress only to die because the game’s lock-on and dodge failed me and got me one-shot by a giant animal. I would then have to proceed and activate all the pillars again, collect a new set of supplies, and build an entirely new boat. Sure, I could change the difficulty to “storyteller” so I only have to restart at the beginning of the chapter I was in rather than the whole game, but I still lose my boat and any progress I made in that chapter, which could equate to hours. It’s like the game took these roguelike elements without realizing what makes those elements work.

And on the topic of sailing, there are a few issues there as well. The sailing in general feels okay, but I found that most of the time I was sailing into the wind, which makes it really painful to get to the next island as you have to constantly tack in order to get any speed. What’s really odd is that you lose the ability to row your boat once you attach a sail, which would have been very helpful when traveling against the wind.

So while Windbound may have some good ideas, the overall experience just isn’t worth it. It feels more like a mess of things thrown together without any of those things having the depth necessary in order to make a fun video game. The combat is barebones and clunky, the survival mechanics feel tacked-on, and the core game loop just isn’t satisfying. You activate a pillar, sail to another island, collect food, activate another pillar, and repeat this process over and over all while trying not to lose it all to some unfair death. I could see this maybe working as an Early Access title, but this is being sold as a full, finished product, and I cannot in good faith recommend it.

You can buy Windbound on Steam here.