So this game is quite literally a more sci-fi Dark Souls. It’s got the same style of combat, the same kind of leveling, the same message mechanic, and even the same taunt system. I may have played a lot of Souls-like games, but this is the first time where that inspiration was so blatantly obvious. The question remains though, is it any good?

So I’ll start with what I would say is the game’s largest draw: its combat. For the most part, it plays pretty much like you would expect from a Souls-like. You get in a few hits, dodge out, wait a bit, and repeat, being careful not to run your stamina bar too low. Of course, this is dependent on the weapon you’re using, which the game has a good variety of. I found myself mostly using larger weapons, but occasionally would bust out a short sword when I needed quick attacks. There’s also a bunch of different ranged weapons, including stuff like railguns, which the enemies also make use of. The feel to the combat is good too, with hits offering a decent amount of feedback and the combat having a nice overall sense of weight to it (again, similar to Dark Souls).

The dodging, on the other hand, can be a bit, well, dodgy at times. It felt fine at first, but as the hours went on, I ran into more and more instances where it felt clunky or straight-up unresponsive. Unfortunately, I can now attribute several deaths solely to it, whether that be a failed attack animation cancel or a roll in a direction that I had not intended. Some of these are due to the game’s combat buffering, which still confuses me even at the time of writing this review. For the most part, it works fine, but I had the occasional double attack input or late dodge despite me inputting it in time to cancel an attack. Of course, there were other instances that were 100% my own fault, but the overall buffering never quite felt consistent. 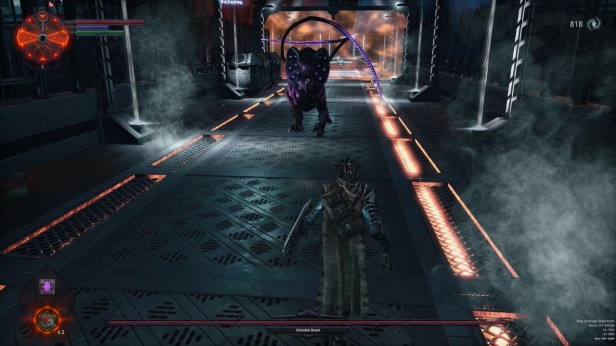 With regards to enemy variety and boss fights, I also feel that that it something the game does a decent job at. The enemies have cool designs and, for the most part, have completely unique attack patterns and the bosses follow suit. The boss fights in particular do a good job at encouraging experimentation. You really can’t approach most of the bosses the same way, and I found myself using different weapons and different play styles to match the particular fight. It was cool to see the game embrace such an approach as it made each boss feel a bit more unique.

On the topic of storyline, the game does have one, but it’s told in a very cryptic manner. You get bits and pieces of it through NPCs, notes and computers scattered about, as well as the environment. This is exactly how Dark Souls does it too though, so that’s yet another area where you can see that influence. It may not be my cup of tea, but I wouldn’t say that it’s bad.

When you are not in combat though, you’ll probably be exploring the game’s various environments, and that also happens to be one of my major complaints. Exploration is good, but when the level design is as boring and uninspired as it is here in Hellpoint, it really kills a lot of the fun. You get these massive, wide-open spaces filled with, well, nothing. Long empty hallways, multi-story buildings with maybe one or two enemies, the level design is full of such disappointment. And that is on top of the game’s graphics, which can look outright cheap at times. The assets and textures are pretty low-quality across the board and feel like something I could find on an asset store. I will give the game some credit for actually implementing some platforming elements, but the overall level design and graphics are definitely not doing it any favors.

And, as this is a game inspired by the Souls series, it also carries over some mechanics that I’m not particularly fond of. The inability to pause, for one, is something I hate to see in any game, and that is unfortunately present here. Then there’s the time-wasting save system, which also happens to be my least favorite thing about the Souls series and any Souls-like game. To be specific, the gap between the save point and any given boss room. I’m fine with dying over and over to a boss and slowly learning to overcome my mistakes, but I absolutely despise having to spawn so far away between attempts and proceed to run all the way back, weaving in and out of enemies in the process. To me, it just feels like a waste of time, a way to pad the game’s overall length.

Unfortunately, my time with the game was also one full of bugs. And not just the occasional ragdoll or two (although that happened a lot), but full on gameplay-halting bugs. For example, I had a bug where a boss magnet hand grabbed me and then got me stuck in the wall, killing me mid-fight after I had already gotten him down to half HP. I also had another bug that had me go full Skywalker and float off a platform until I restarted the game to load back to my last save. Those are just a couple examples of the major ones though, I also ran into some more minor ones like assets not loading in properly and several instances where attacks that should have landed did anything but that. And I should also note the camera, which ranges from decent to borderline unusable, especially during some boss fights. As several of these fights take place in ridiculously small spaces, it wasn’t uncommon for the camera to get way too zoomed in or stuck on a wall and give me a less than helpful angle.

So with all of that considered, I unfortunately cannot recommend Hellpoint. It obviously has a lot of effort going into it, but it never quite felt like I was playing anything other than an average Souls-like with plenty of bugs and less then stellar level design. I’ll give it some credit for doing the combat better than a lot of similar games, but that unfortunately could not outshine its issues. Maybe the bugs can be patched with time, but stuff like the level design and overall graphics are likely here to stay.

You can buy Hellpoint on Steam here.