So we’ve actually gotten quite a few Fairy Tail games up to this point, but I’m pretty sure this is the first time that one has released outside of Japan, unless if you include that odd browser-based one. As someone that has seen all of the anime, I’d say it’s about time. The series is perfect for a video game and I was excited to check it out.

Fun combat. When I first heard that they were going to make a Fairy Tail game, turn-based combat was definitely not what I had in mind. However, Gust managed to do just that and they did a pretty good job with it. The studio is mostly known for their Atelier series, if you’re familiar with that, the combat here has a pretty similar feel to it. It’s simple in that you have your four basic commands per character, but gets increasingly more complex as the game goes on with stuff like link attacks, extreme magic, and the many different forms that characters can transform into.

Despite this though, the mechanics are introduced at just the right pace that it never really felt like too much. They managed to strike a nice balance between being completely simplistic and having a decent amount of depth. It never gets old landing those 10+ hit link attacks with six-digit damage numbers if anything. And it’s also cool in that each move has its own animation, and not something cheap like in Pokémon, but full-on Fairy Tail-level animations, like what’d you get in the anime. They can last pretty long, but you are given the option to disable them when in battle, along with a handy auto-battle feature. The combat overall felt nice to play around with and ended up being my favorite part to the game.

Decent storytelling. So, I won’t make the claim that Fairy Tail is known for its strong story, but I was actually impressed with how they handled it here. For one, they didn’t start right at the beginning, instead throwing you into things right after the time skip that takes place after the Tenrou Island arc. This puts the start of the story at around episode 123 for the anime and chapter 254 for the manga, with the game covering the Grand Magic Games and Tartaros arcs.

Of course, this makes the game harder to get into for those not already familiar with the series, but if I had to pick a start point that wasn’t the beginning, I’d probably go with what they did here. It’s a decent enough starting place and eases players back into the story gradually (a definite plus considering I have not seen the original anime in years). The events of these arcs were definitely more interesting than the beginning of the series, so it was nice to see the game focus on them.

But that’s not even my main point here. What I was really impressed with is that the devs actually tried to tell the story of Fairy Tail. They didn’t just highlight key events, instead offering up numerous cutscenes, dialogue scenes, and other storytelling bits to offer a proper alternative to the anime and manga. It still doesn’t compare to those two, but its a valiant effort and worth praising. Of course, this comes after I was scarred by the lighting-paced storytelling in Koei Tecmo’s Attack on Titan games, so maybe FAIRY TAIL is just better by comparison. 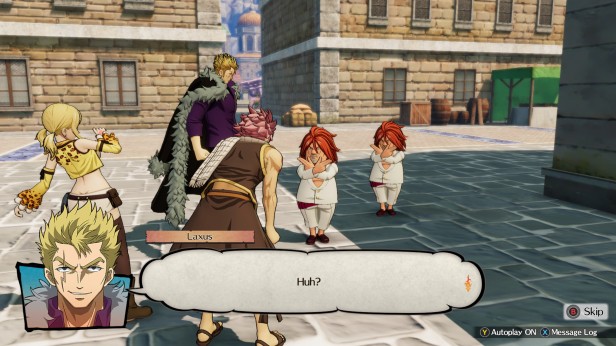 Lazy story and graphical elements. I may have just praised the game’s effort at telling the story, but there’s a reason I used the term “decent” and not something like “great” to describe it. That’s because it does become a bit lazy at times. Not so much with regards to the actual pacing or whatnot, but rather with the more technical side of things.

For example, as the game goes on, you will notice more and more dialogue scenes where the devs could not be bothered to make a model for a character. It’s really obvious too, as the characters that do have models will talk to this character by facing off-screen. Similar things can be said about the voice lines, which the game does have a good bit of, but not every line or character is voiced. There are even key story scenes with unvoiced characters talking to characters that have voiced lines, it can be a bit jarring.

The game reaches peak laziness when it just throws up a screenshot from the anime and slaps some dialogue on top of it. Sure, they can be helpful in telling the story, but I feel like we should be expecting more from a higher-profile game like this, especially for a franchise as popular as Fairy Tail.

Boring quest design. Okay, so it’s never a good sign when you’re not even two hours into a new JRPG and they already start throwing filler quests at you, but that is unfortunately the exact experience I had with FAIRY TAIL. It wouldn’t be wrong to describe the vast majority of the game’s quests outside of the main storyline as simple fetch quests, kill quests, or “go here, talk to this person, and report back” quests. Although some of them have a light story tacked on top, they never quite reach the point of feeling like anything but filler.

And what makes it worse is that you are practically forced to go on several of these quests in order to raise your guild rank as required by the main storyline. This becomes an increasingly more difficult process as the game goes on, with more and more quests required to raise even a single point in the ranks. Honestly, it just felt like a way to pad the overall length. In the post-game? Sure, but it this kind of content has no business being in the main story.

Wildly fluctuating difficulty. Even at the time of writing this review, I am still confused about the game’s difficulty. It’s like the devs were in disagreement as to whether to make the experience easier to focus on the story, but still wanted to have some challenging boss fights. The result is a wildly fluctuating mess that never really quite made sense. For example, there were plenty of bosses I could easily take down using the game’s auto-battle, without ever really needing to put forth any effort. However, the random enemies on the map leading up to that fight could easily two or three-shot my entire squad.

I also noticed the reverse though, with some random mobs getting easily one-shot, but bosses being a lengthy ordeal. The game never quite found a middleground, instead making each fight a coin flip with regards to difficulty. And you would think that maybe this was just a problem with the normal difficulty, but I noticed the same thing from the hardest difficulty. Enemies would simply shift from getting one-shot to getting three-shot. It wasn’t even like the leveling was a problem either, as I mostly went into boss fights a few levels under and still managed to auto-battle a lot of them.

Subpar port. I would have thought that, at this point, Koei Tecmo would have learned from their past PC ports, but I may have been a bit too optimistic. The port here for FAIRY TAIL, while satisfactory in some areas, is vastly lacking in others. For example, while they may have expanded on the graphical options, the game is still hard locked at 60 fps. Normally, I wouldn’t be complaining too much about that, but this is a game that looks like it came straight out of the PS3 era, with low-res textures and static NPCs everywhere, is it really that hard to offer anything higher? That and the 60 fps is not even constant, dipping during certain moves and whenever there are big effects onscreen.

It gets much worse on the control side of things, with the game being a very noticeable downgrade in that department. For one, you are unable to remap controls in-game, instead having to use an external ini file for both controller and keyboard controls. And yes, that is just keyboard, no mouse, as the game only appears to have mouse support in menus. It’s honestly not even worth trying to play it with just keyboard controls, it doesn’t feel intuitive in the slightest. Perhaps this is something that will be patched in, but for now, a controller is pretty much necessary. 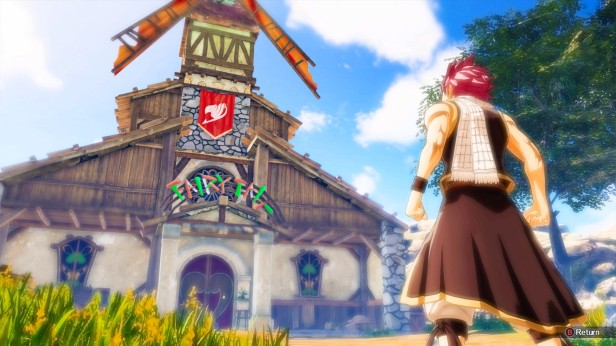 FAIRY TAIL is not only a disappointment for fans of the series, but is a disappointment for the studio. This comes from the same guys that do the excellent Atelier series, yet FAIRY TAIL never quite sticks the landing. The combat may be good and there’s definitely a decent amount of effort put into giving an authentic Fairy Tail story experience, but there’s so many issues along the way that it really brings down the experience. Wildly fluctuating difficulty, boring quest design, and even a subpar PC port to top it all off make this a tough sell, even to fans of the series. I’m honestly just disappointed. Fairy Tail is a massive series, we deserve better than this.

You can buy Fairy Tail on Steam here.