Normally, when playing horror games, you are the one running from the monster. You’re the one stocking up on weapons, hiding away behind a door, and fearing for your life. Well, in CARRION, that role is completely reversed.

So let’s get right into the gameplay. You play this giant spaghetti alien thing and your goal is simply to break out of the facility in which you are trapped. To do so, you will need to explore different sections of the facility, take out any humans you come across, and unlock new abilities to further your own power. It definitely has that metroidvania style going for it, as the map is this large interconnected maze and you only gain access to new areas of it as you unlock your different abilities. These can be anything from being able to pull levers from afar to being able to temporarily take control of a human host.

These abilities are both used in combat and used to solve the game’s various puzzles. The puzzles themselves are not too complex, but are decent enough that it never felt like they were getting in the way of the action. If anything, they can actually be quite clever at times and they do a good job at easing the player into each new ability as they’re unlocked. And unlike a lot of other metroidvanias, CARRION does not forget that these abilities exist. It balances its use of older ones with the newer ones as they are unlocked, it’s pretty nicely paced in that regard.

But of course, the main draw here would be the action, and that is something that CARRION really excels at. Not only is it fun to play as this giant spaghetti alien, but it just feels good to move around with. The controls are intuitive, the movement is snappy, and there’s pretty much nothing stopping you from flying all over the screen and eating people. The combat itself is equally satisfying and actually has a sense of weight to it. Although a lot of the enemies you come across will be unarmed and, thus, easily eaten, there are still certain types that put up a bit of a challenge. These include simple machine gun wielders, flamethrower dudes, and even mechs that require multiple strikes to take out. As with the puzzles and exploration, the combat also has a nice sense of pacing to it, never lasting so long as to lose its appeal. That’s something that the game really gets right, properly balancing all of its elements without ever really losing focus.

A major point that needs to be made though is that the game is only about three hours long. I’m not one to complain about a game’s length, especially when the experience is as well-paced as it is here, but the point should still be made for those that may go into it expecting a longer one. 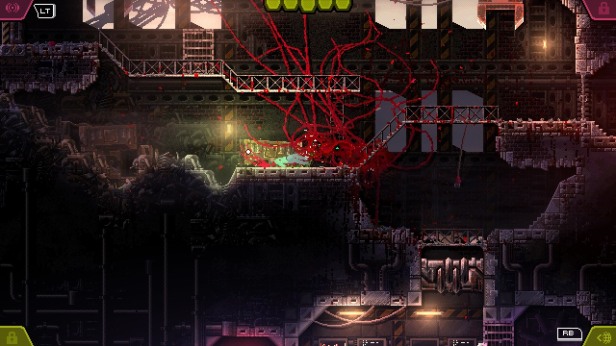 As for the story, well, the game actually has none, and honestly, I’m not even complaining. I opened up the game and was immediately thrown into the gameplay without any sort of introduction. It was actually quite refreshing, as your goal is so simple that a story isn’t even that necessary. It’s rare to see a game like this focus 100% on the gameplay, but CARRION managed to do just that and to great effect.

With regards to the game’s graphics and performance, I have little to complain about there. The pixel art is nicely done and the overall aesthetic definitely fits the gameplay. The music and sound effects were fine as well, although nothing too spectacular there. On the technical side of things, I played through the entire game at 1440p 155 fps and had no issues with regards to frame drops, crashing, stuttering, or anything like that. The only real technical issue I had was the occasional control hiccup when the creature was at its maximize size. It becomes a bit harder to make it go the direction you want when you’re in smaller spaces, but aside from that I didn’t really any other problems. 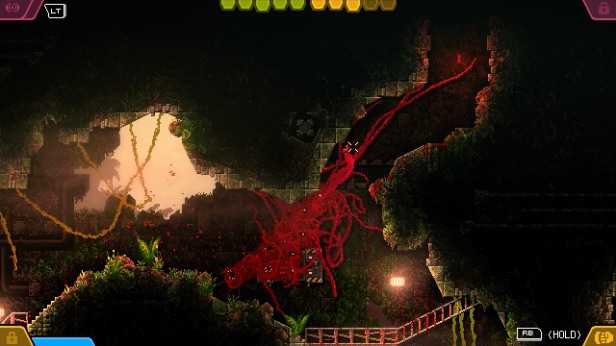 So given that, I would say that CARRION is definitely worthy of recommendation. It looks great, has some nice combat and exploration balancing, and, most importantly, is just fun to play. It never got old zipping around, eating dudes, and unlocking new abilities. Sure, it’s a shorter experience at just three hours, but those were some fun three hours and it’s still definitely worth a look.

You can buy CARRION on Steam here.