Having just played through and enjoyed Heavy Rain, it only felt right to take a look at Quantic Dream’s followup game, Beyond: Two Souls. It was also released back during the PS3 days, 2013 to be specific, and is just now finding itself on PC via Steam. It shares many similarities with the former, while also introducing some issues of its own.

Improved gameplay elements over Heavy Rain. What immediately surprised me with this game was just how improved the gameplay was over Heavy Rain. Instead of going the full cutscene with quicktime events route that the former mostly did, Beyond: Two Souls makes use of a very cool split gameplay perspective. At any time when you have full control of the character, you are able to tap a button and then take control of Aiden, a supernatural entity that is tied to the main character. When playing as Aiden, you can fly around, interact with stuff, take control of certain characters, and even outright kill people.

It sounds simple, but when combined with the game’s storytelling, it actually makes for a pretty cool system. You’ll be given an objective to complete that requires the use of Aiden for example, and depending on how you go about doing so, several different story events can result. This can be minor stuff like a missed bit of dialogue to major ones like character deaths. It’s a neat way to encourage exploration, while also still tying in to the story-driven nature of the game. It also makes for some decent puzzle design at times, miles better than what we got in Heavy Rain.

Excellent PC port optimization. As they did with their previous title, Quantic Dream has yet again delivered a pretty good PC port. Up to 4K resolution, 21:9 monitor compatibility, and, of course, the doubled frame rate to 60 fps. Then you got the extended graphics configuration in the form of more anti-aliasing options, ambient occlusion, depth of field, and a toggle for motion blur (which is definitely appreciated as that is always something I immediately turn off). It’s a technically superior version to the previous iterations on just about every front. You can even achieve a higher framerate through the use of external tools, although the game has built-in Vsync that cannot be disabled. The port may still have some issues when it comes to controls, but otherwise, it’s pretty well-optimized and I had no issues playing through it in its entirety.

Abysmal controls. It’s honestly surprising how Quantic Dream was able to take the awful controls from Heavy Rain and somehow make them even worse in Beyond: Two Souls. Sure, they improved upon the camera and overall movement, but the quick-time events that the studio had become known for have taken a nosedive here. A lot of this is due to the game’s new slow-mo feature, which basically slows down time whenever you are in combat to allow for quick time events.

However, instead of throwing up button prompts like in Heavy Rain, you instead have to input buttons to match the movement of the main character. Whenever her hands are moving left, you move the stick left for example. This sounds simple enough, but it is a much worse system in practice. Half the time it’s hard to tell what input the game wants, especially when her arms are moving both down and to the left. That and it felt like a lot of the time I actually put in an input, the game would simply ignore it, forcing me to input it again or miss the input entirely. It’s not a great system, and that’s when it works at all.

Other than that, the game suffers from some other control issues that were also present in Heavy Rain. The keyboard and mouse controls, for example, are still obviously a rework of controls meant for a controller and just feel awkward to use at times. And while I did say that the movement was improved, it still isn’t perfect. There were still a couple instances where it felt like the camera was working against my movement and vice-versa.

Severe writing issues. As with their previous title, Beyond: Two Souls suffers from a number of writing issues. However, unlike their previous title, the issues are far more severe here. Of course, you get the usual plot holes and such, but now you have an entire plot line driven by reasoning so shallow that it’s honestly baffling. I can’t get specific without spoiling the game’s ending, but let’s just say that by the time I reached that point and had all of the game’s events put into context, it pretty much killed any hope I had for the story.

And that is on top of the hundreds of different plot conveniences that allow the story to continue in the first place, some of which were so blatant that it really takes you out of the experience for a bit. This could be anything from a conveniently placed weapon to a group of soldiers violating just about every rule of, well, being a soldier. What makes it even worse is that you already know the end result of most of the game’s story scenes. Because the story is told out of order, any sort of intensity brought on by a fight to the death or any other dangerous situation is immediately thrown out of the window because the game begins with a scene that takes place after all of these events have already transpired. There’s no wondering “wow, I might actually die here” because you already know that to be false.

Overambitious storyline. A lot of the game’s writing issues, while issues in their own right, are actually the result of a much larger problem with the game’s story. Simply put, it is way too ambitious. You got the whole supernatural side to the story, the military side to the story, the family side, and a bunch of other stuff that just felt like it was thrown together. It’s like the writer had a bunch of ideas for a bunch of different stories, but was told that only one game was going to be made, so instead of picking and choosing what would work well together, all of these ideas were put together into one giant mess.

It made the experience feel like I was going down a checklist of what the writer thought would be cool to include in a video game. I won’t deny that at least some parts were interesting, but the experience as a whole just does not flow well, instead taking the form of a bunch of events that had to be connected in some way in order to give the impression of a coherent story. Some of these are even completely unnecessary, like the entirety of the chapter set on a ranch. That particular example added nothing to the overall story and ended up just feeling like a giant chunk of filler. 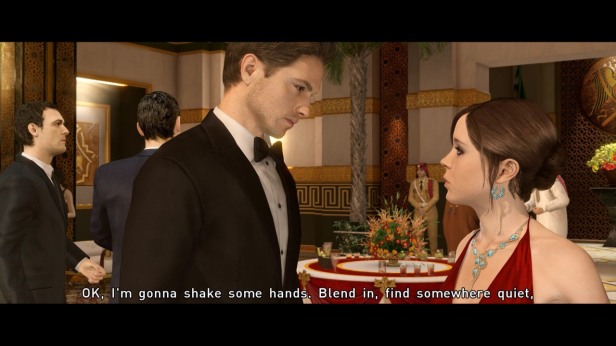 While the story may be interesting at times, the sheer weight of the game’s writing issues really bring down the experience. From the heavy reliance on plot conveniences to the overly ambitious nature of the game’s storyline, there’s simply too many issues to warrant recommending it. It may have gotten a gameplay upgrade over Heavy Rain, but unfortunately that’s not enough to carry the story.

You can buy Beyond: Two Souls on Steam here.