Take The Binding of Isaac and Enter the Gungeon, change the perspective to 2D side-scroller, and slap a neon aesthetic on top of it, and you end up with something like Neon Abyss, the latest indie to take a stab at the action roguelike genre.

So right off the bat, the game immediately sets itself apart from the crowd with its bright, neon-infused aesthetic. It’s vibrant, it’s colorful, and it works surprisingly well for this type of game. The sprites, while simple, are clean and easy to differentiate between with the backgrounds being bit more detailed,  yet still fitting the overall theme. The projectiles on the other hand, are very brightly colored to contrast with all of this. It not only gives the game its defining look, but makes it much easier to track what is going on. Granted, some upgrades will make this impossible once you have a hundred or so projectiles going all over the place, but that just comes with the genre.

As for that gameplay, I would say that the game does a decent job at tackling the genre. The combat feels fluid and encourages constant movement, hits feel impactful and it’s not like you’re attacking paper enemies, the enemies themselves are varied as are the boss fights, and the customization across the board definitely leaves a lot of room for experimentation. As with other such roguelikes, there are a bunch of items and upgrades to be found in each run. This includes new weapons with their own passive and active abilities, simple stat upgrades, passives that change the way combat and movement work, and a cool “pet” system that plays similarly to Isaac‘s familiars. 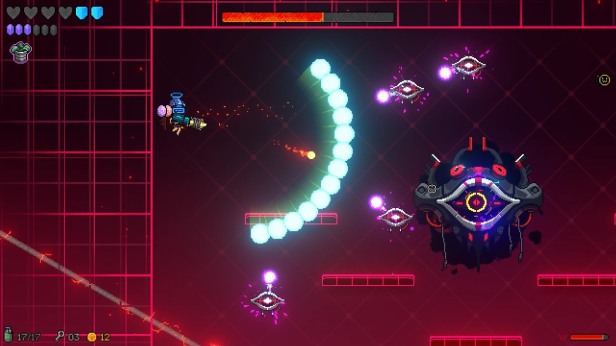 The pets work by finding eggs, which then follow you around until they hatch into a familiar or hatch into nothing, it’s a random chance. These familiars have a bunch of different effects, ranging from picking up items to tanking projectiles for you. However, they also have their own HP and will die after some time and not all of them are helpful either, there are some that can make your runs more difficult. It’s a cool mechanic in that it is entirely separate from the regular upgrades and items you usually find, yet still can synergize with them.

In fact, on the topic of synergy, I feel that that is something the game does pretty well. Even excluding the pets, a lot of the base items can synergize well with each other, such as the time I found an upgrade that caused me to lose HP before shields and another upgrade that increased my weapon damage based on how many shields I had. That combination had me dishing out a ton of damage due to how many shields I was able to stack.

However, the reverse is also true. You can just as easily pick up something that makes it much harder to play, such as that time I got exploding bullets, but had a pet that blocked projectiles in front of me, including my own. Of course, this resulted in me having to time my shots to avoid hitting said pet and having a bullet explode right on top of me. The RNG can be pretty brutal in this way, but I find that that is what makes these kinds of games fun. You can get a completely broken combination and cheese an entire run and then go into the next having an upgrade or two that you have to actively work around in order to succeed. The gameplay fluctuates a lot in this way and it definitely makes for a more addicting experience if anything.

That said, my main complaint would be with the game’s lack of depth compared to other games in the genre. Sure, the synergy and all of that offered by the items and the room variety is decent, but it doesn’t feel like enough to really give the game the same sense of replayability. For example, while the items themselves may have different sprites and descriptions, a lot of them offer the same old “damage up” or “movement up” without really offering anything unique outside of that. You slowly unlock more unique items as you play, but it still felt like the majority I picked up fell into the simple “stats up” category.

And then you have the active abilities (the one’s tied to weapons activated with a right click, usually at a cost). In all my time playing the game, I have not once come across an active ability that I found myself using more than maybe two or three times in a given run. Most of them are simply too expensive to warrant using or have such specific use cases that I forget that I even have them. Really, the only one that I found myself using across multiple runs was the one that granted temporary flight until you leave the room, but even that was only to pick up treasure that would have otherwise been out of reach, I never used it for combat. Such active abilities are a great mechanic in theory, but the game doesn’t really use it to its full potential.

As for the technical side to the game, I had little issue there. The game looks great and runs well at 1440p with an uncapped framerate. The included Vsync though did not appear to work correctly. It would constantly shift my framerate from 60 to the 155 allowed by my monitor, so I ended up disabling it. Other than that though it was smooth sailing and I never ran into any crashes, freezing, bugs, or really any technical issue at all, maybe I was just lucky. The game recommends using a controller, but I found the keyboard and mouse controls to be preferable, although both definitely felt fine.

So given all of that, I would say that Neon Abyss is a pretty easy recommendation for fans of the genre. The combat feels great, the movement is fluid, the exploration is fun, and the synergy offered by the different upgrades and such definitely can make for some interesting runs. It may lack the overall depth seen in similar titles, but its a fun enough roguelike that I can see myself returning to from time to time.

You can buy Neon Abyss on Steam here.