Battle for Bikini Bottom is one of my all-time favorite games. I grew up with it and have replayed it numerous times over the years, even recently. So you can imagine how excited I was when a full remake was announced, especially one that was going to stay true to the original that I love.

Excellent platforming elements. The GameCube and PS2 era brought us some of the best 3D platformers ever made. We had stuff like Super Mario Sunshine, Super Monkey Ball, Sonic Adventure 2, and, of course, Battle for Bikini Bottom. As Rehydrated is a straight remake of that original, it naturally contains all of the mechanics and design choices that made that original so good.

A lot of this can be seen with the game’s actual platforming. It has all of the staples of a fun 3D platformer, including the diverse set pieces, the smooth transition between different platforming sequences, and the numerous enemies and bosses scattered about to shake things up. You’ll go from sliding down a massive hill, to doing some light platforming with a few enemies to take care of, and then finish it off with a boss fight that makes use of the different character mechanics in very cool ways. It just flows so well and by the time I’ve noticed, hours have already passed. It’s some of the best 3D platforming of the era and Rehydrated just makes it all feel new again. 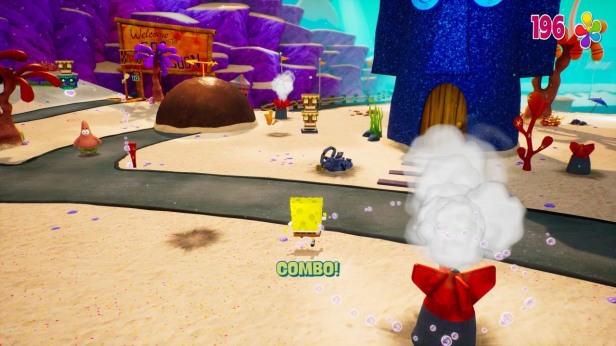 Fun character mechanics. The platforming would be wasted if the characters were not fun to play, but that is simply not the case here in Rehydrated. The characters take advantage of the environment in a number of ways, whether that be Sandy’s swinging across the rooftops, Patrick’s skating across frozen water, or SpongeBob’s taking out of enemies from afar with the cruise bubble. As the mechanics are unique to each character, they offer up a good amount of diversity to the base platforming.

Of course, that is on top of them already being fun to use (it never gets old swinging and flying around as Sandy or body slamming robots as Patrick). In the case of SpongeBob, they even offer an incentive to revisit previous areas and see what hidden goodies can be found, as you don’t start the game with all of his unlocked. And it’s not like you have to go out of your way to do so, the game allows you to fast travel to relevant points in each level. Rehydrated makes this aspect even better, as it has this cool map that shows what you’ve missed visually, unlike the simple text descriptions used in the original. Overall though, there’s a nice balance struck between the base platforming and how each character’s abilities can affect it and it makes for a pretty fun overall experience.

Fantastic game world. A large part of what makes the game so fun is having an equally fun game world to match. Throughout the game, you’ll visit a number of different levels pulled directly from the cartoon, including the bright and colorful Jellyfish Fields, the depths of Rock Bottom, the slopes of Sand Mountain, and even the inside of the different characters’ dreams. As a fan of the cartoon, seeing all of these in action was one of my favorite things about the original game, and the fresh coat of paint applied by Rehydrated just makes it that much better.

On the audio side of things, the remake does keep the original music and voice lines, which was a nice touch and definitely helped fuel my nostalgia while playing. Whatever the case, the overall game world and its numerous set pieces feel right at home in the SpongeBob universe and really bring out what makes it so fun.

Great visuals and optimization. Rehydrated not only brings a classic to modern platforms, but gives it a very nice visual upgrade in the process. You’ve got the updated models, the higher resolution and more diversified textures, the new particle effects, and then the more technical aspects like increased resolution support and higher framerates. The game looks great and I had no issues running it at 1440p 144 fps, and I honestly couldn’t ask for much more. I was fully expecting the game to be capped at 60 fps given its multiplatform development, so that was a nice surprise.

If anything, the lack of rebindable controls (both on controller and keyboard and mouse) was disappointing to see, but hopefully this is something that can be added later. That doesn’t excuse them not being available on launch though. That and the game’s colors can be a bit oversaturated in some areas, but it only affects a few of them, so it wasn’t anything too major.

Some technical issues. While I did not run into anything game-breaking, I should note some of the smaller technical issues I ran into. Among these were a cutscene that kept triggering over and over, the occasional wonky camera angle that disrupts the flow of gameplay, and the numerous times that the game’s hat-wielding enemy got stuck in his animation and bugged out. The original game definitely wasn’t without its own issues as well, so this is yet another area that the remake pays homage to. I’m joking of course.

Rehydrated is an excellent remake of an already excellent game. It looks great, runs well, and is just as fun as the original was over a decade ago. The game was a masterpiece back then and pretty much just got a nice visual upgrade, there’s honestly not much to complain about here. Sure, the multiplayer mode is lacking, but that doesn’t detract from the core experience. It’s literally the same game, but updated for modern platforms and that’s really all I need. Well, that and a remake of the SpongeBob Movie game, so here’s hoping that we might see that one day.

You can buy SpongeBob SquarePants: Battle for Bikini Bottom – Rehydrated on Steam here.