So this is a very interesting mix of genres. Here we have an action murder mystery game, with hack and slash combat at that. I can’t say I’ve played many of this type (or even any at all), but it was such an interesting combination that I couldn’t pass it up.

Impactful combat. When you’re not solving puzzles or going through story scenes, you’ll probably find yourself engaging in hack and slash combat. For a game that places most of its focus on that story, I was actually surprised with how the combat felt here. It’s not only fleshed out with a bunch of neat mechanics, but the core combat itself is pretty satisfying. Hits on both enemies and the player offer proper feedback, the enemies have very clear attack indicators and offer enough time for the player to react, and really, the combat in general just has a nice sense of weight to it. It doesn’t have that “paper enemies” issue that a lot of other indies run into ⁠— when you land a hit, you will know that you landed a hit.

Then there’s the combat flow. It’s a lot like the Batman: Arkham games, where you’re easily able to snap to and from enemies as you defeat them. You can just spam the attack button and let the game do some of that for you, but there’s a lot to be gained by making use of dodge rolls, ranged attacks, and other abilities like companion attacks and time slowing. It definitely has some issues here (which I’ll get into later), but for the most part I found the combat to be pretty good.

Very cool storytelling. Perhaps the game’s biggest draw would be its story, and for a good reason. Not only is the story itself well-written and with a bunch of interesting characters and cool twists, but the manner in which the story is told is quite unlike what I usually see with such games. The game takes place after its world has already ended and you take up the role of a sort of spirit warrior and are tasked with traveling back in time to figure out just what exactly happened.

You don’t simply pick a time and travel to it though, you have to pick from one of four different characters to experience the events through. You’ll fight alongside them and uncover plot points along the way, some of which permanently change the events you experience through the other characters. A major story development is called an “omensight” and it basically grants you the ability to share a vision with these characters, which in turn changes their actions and leads to even more story developments.

It’s not like the game wastes your time here either. If you go down one character’s path and find that you’re unable to do anything there without more information, you’re able to jump right back to the relevant point once you do have that information. It’s an overall complex way of telling the story for sure, but a very cool one at that and was definitely the highlight of the experience for me. 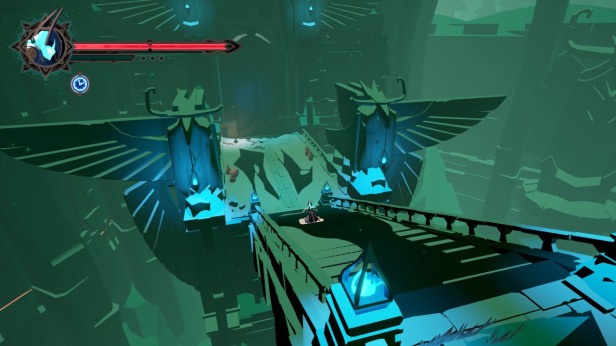 Great art direction. Omensight has a very striking aesthetic. It’s a sort of stylized cartoony look, but with a heavy emphasis on dark coloring. There isn’t much in the way of texturing, but that’s what makes the color choices that much more obvious. It gives weight to the game’s dark aesthetic, which goes hand in hand with the dark nature of its storyline. As for performance, I personally had no issues there. The game looks great and runs well at 1440p 60fps. It’s a shame that it’s capped at 60fps, but at least it never dips below it.

Boring level design. For how great the art direction here, Omensight has some rather boring level design. Whether it’s the repetitive nature of their layouts or the numerous large empty rooms and long hallways, there just isn’t really a lot going on there. Even the secrets and such scattered about the map are placed in the most predictable locations and most of the time offer no challenge to reach them. Of course, some areas are better than others, but its pretty lacking overall, a direct contrast to the game’s excellent aesthetic.

Flawed combat mechanics. Although I may have praised how impactful the combat felt, it isn’t without its issues. There are a number of different combat mechanics that range from annoying to just outright flawed. For example, the entire basis of the energy system just doesn’t work. You gain energy by attacking enemies and you lose it by either not doing anything (i.e. out of combat) or by being hit while in combat. If you build up enough of it, you’re able to unleash a variety of different moves dependent on how much you have built up.

The problem is that, by the time you’ve actually built up this energy, the enemies are either all dead or are so low that you don’t even get to use them to their full potential. You get the occasional combat situation where these abilities can prove useful, but for the most part, they’re pretty much wasted.

And then there’s the issue of the game’s dodge roll. I don’t know how exactly the devs have done it, but they’ve managed to make it feel both responsive and clunky at the same time. Half the time I use it, I dodge the attack I’m meaning to and am able to continue the flow of combat, but the other half it’s like I stop in place and eat a ton of attacks. There’s no in-between and it makes some fights more frustrating then they need to be. Of course, there are other issues with the combat (like the lackluster enemy variety), but these couple issues really stood out to me.

Some technical issues. While the game may run well, it isn’t without some issues, most notably its absolutely atrocious keyboard and mouse controls. I don’t know why it was decided that the mouse would control direction rather than WASD, but that is exactly the case here and it absolutyely does not feel good to use. This is a third-person hack-and-slash with a ton of dodging in and out of combat, I shouldn’t have to flick my mouse all over the place just to land hits and dodge properly. It is for this reason that I played through the game with a controller, which feels much, much better.

I should also mention the camera. Most of the time, it works fine, but it occasionally just decides to not do so and gives you a really awkward angle. This is especially annoying during the platforming segments when a proper angle is necessary to gauge the distance between platforms. It’s not a player-controlled camera, instead dynamically shifting around based on your movement, hence why these issues exist. 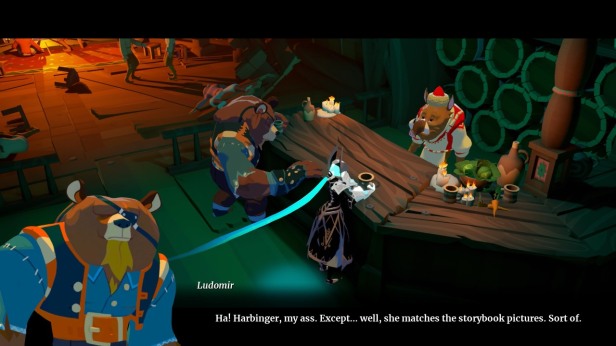 Omensight: Definitive Edition does a good job at what it sets out to do. It’s a narrative-driven game that not only features a well-written story, but manages to tell it in a very cool way. However, there are other areas where the game suffers. For example, the combat itself feels great, but has a number of flawed mechanics to it, including a wasted “energy” mechanic.

On the design side of things, the art direction is great and the game runs well on top of that, but the actual level design is pretty lacking. And of course, there are a couple technical issues on top of that, such as the awful keyboard and mouse controls. It’s a flawed experience for sure, but it’s one I would still recommend for those into narrative-driven games, just be sure to use a controller.

You can buy Omensight: Definitive Edition on Steam here.