The Shantae series is great, so of course I was excited when they announced a new one. However, my expectations were immediately lowered upon hearing that the game would be developed for Apple’s new Apple Arcade service, effectively changing the target platform to mobile devices. Now, nearly half a year later, the game is fully out on all platforms, so it’s time to see how it measures up.

Excellent game world. Unlike Half-Genie Hero, Seven Sirens takes a more traditional metroidvania approach to its game world. This means that, as you progress in the game, you will explore an ever increasing interconnected map, without having to stop to warp to different areas. Loading screens still separate some of them, but the map itself is just one giant thing, with different areas opening up once you’ve unlocked certain abilities. It was actually cool to see how they managed the progression here. For example, I would be exploring trying to make my way to another town and have to cross a body of water to reach it. Unbeknownst to me at the time, that body of water leads to a completely new section of the map, one I can only reach once I have the ability to swim.

You begin making mental markers of these areas to come back to later once you have certain abilities, with some areas progressing the story and some granting you additional goodies like health upgrades. It was cool to see the game world evolve in this way, with every new area linking to others, but never becoming a pain to explore. There is still some backtracking, but there is a warp system in place to limit it. And the exploration was fun enough that it never grew tiring, partly due to the game’s short runtime at around seven hours. Regardless, I liked the change of pace here compared to the last game.

Fun gameplay mechanics. Another Shantae game, another platformer full of fun gameplay mechanics. Seven Sirens brings back all that made previous entries work and adds on top of it, introducing some new mechanics of its own while staying true to the spirit of the series. The transformation system, for example, is still there, but this time it has been divided into two different mechanics.

You have abilities that you’re able to activate by dancing just like in the previous games and then abilities that activate automatically depending on the environment. Touching water automatically transforms you into a frog and touching sand transforms you into a drill, for example. There’s no need to do a dance before using these, they’re just automatically activated, which was a nice change of pace compared to the last game and definitely gave the gameplay a bit more flow.

Of course it isn’t just the ability system that the game has going for it, you still got the unique and colorful enemies with their variety of attacks, the light puzzle design scattered throughout the game world, and the many different boss fights too. For an action platformer, it’s a pretty solid overall package with regards to its gameplay and is yet another example as to why I love this series.

Cool new upgrade system. Among the new features comes one that I particularly enjoyed: the card system. This system basically plays like a collectible card game, with enemies occasionally dropping cards representing themselves. Collect enough cards from one type of enemy and you can equip its passive ability. These abilities range from damage buffs, to speed buffs, to more unique ones like a loot magnet, an ability to convert gems to hearts, and reduced item shop prices. Combined with the abilities I mentioned before, there’s a good amount of customization here and you can get some pretty nasty combos going given the right cards. Of course, that is on top of it already acting as a cool little completionist objective. It’s a great addition overall and one I hope to see in future Shantae games.

Cheesy, but fun story and dialogue. One thing WayForward has always been good at is delivering a fun story, and that doesn’t change here in Seven Sirens. The setup is simple: Shantae and her friends are invited to vacation on an island and participate in their Half-Genie Festival, only for the other half-genies to get kidnapped in the middle of it. Of course, it’s then up to Shantae to hunt them down and figure out the mystery behind Paradise Island. Along the way you’ll run into familiar faces, meet new and interesting characters, explore a bunch of cool areas, and be subjected to a number of terrible jokes. The dialogue and overall plot may be cheesy, but that’s honestly one of the game’s strongest points — it manages to strike a nice comedic balance there. Sure, it may not be that complex a story, but it’s got that WayForward charm to it, and that’s something I’ve come to love from their games. 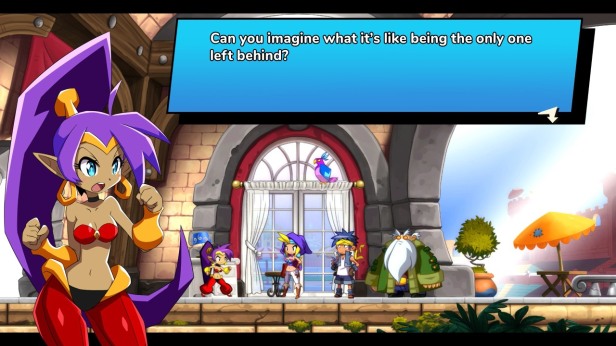 Graphical and musical downgrade. Shantae and the Seven Sirens is a mobile port and, unfortunately, it shows. Compared to its predecessor, Half-Genie Hero, the graphics and music are noticeably worse, both on an artistic and a technical level. For example, the swap from 3D to 2D graphics makes for less environmental detail and removes that cool 2.5D contrast that Half-Genie Hero had going for it. The animation is still fine, but there are areas where it felt like the game was cutting costs. The final boss, for example, is literally just one static image on the background floating around. Overall though, it still looks decent for a 2D platformer, but it didn’t really capture me like its predecessor.

And then you have the music, which is a much more obvious downgrade. It’s quite hard to explain, but it simply lacks the life that prior Shantae games had. It felt more like just generic chiptune without any real charm to it. It was such a departure from previous soundtracks that I was not surprised to learn it was from a new composer team when I did my research. The composer that had done every Shantae game prior had no involvement here, which was quite the disappointment. And then there’s the fact that, on a technical level, the music is at a much lower quality. I extracted the game files and found that the music is stored in a lossy format, roughly the same you’d get from a YouTube video and hardly a format that any modern PC game should be storing audio at. It was likely a measure to save space for mobile platforms, so it’s unfortunate to see that carry over to PC. 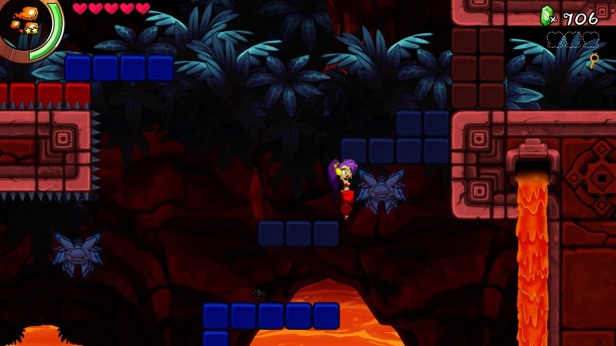 Mobile game design. It isn’t just the graphics and music that show signs of the game being a mobile port. The overall experience (even excluding those two) felt like it was being catered to a different crowd, the more casual crowd that you would find amongst mobile gamers. This can easily be seen with regards to the game’s difficulty, which has taken a nosedive compared to its predecessor. Not only are health drops plentiful, but you’re even given a healing ability pretty early on. And this is on top of the numerous healing items dropped by enemies, items I hardly even needed to use because the healing ability and health drops were plenty already.

In fact, I had so many of these by the end of the game that even after purposely tanking every hit from the final boss, I still had a ton leftover. I managed to finish the entire game having only died a few times, and even then, those few times were just me being dumb and trying out new things mid-fight. I’m not saying that the game needs to be brutally difficult, but if you’re not going to have difficulty levels, then there needs to be at least some form of challenge here.

It isn’t just the difficulty though. I may have praised the game world, but the actual levels can feel pretty flat at times. They’re blocky in their design, have limited background animation (sometimes they’re even static), and just feel like an overall downgrade compared to what we got in Half-Genie Hero. What makes it worse is that there are numerous loading screens separating these areas, loading screens that take a long time even with the game installed on my NVME SSD. It’s obvious that the game was designed with a mobile platform in mind and this unfortunately makes the overall experience feel cheaper than what I would usually expect from a Shantae game.

Seven Sirens is another great addition to the Shantae series. It takes what prior games did right and expands on them, introducing new abilities, a cool new card mechanic, and fleshing out the game world at the same time. Of course, this is on top of the cheesy, yet fun storytelling and dialogue that WayForward has become known for. Sure, it may not be as good as its predecessor Half-Genie Hero considering that it was designed for mobile platforms first, but it’s a solid action platformer all things considered and one I would recommend, even to those that have not touched the series before.

You can buy Shantae and the Seven Sirens on Steam here.