As a fan of the Shield Hero light novels and anime, I was rather surprised to see a game suddenly show up on Steam bearing its name. It may come from a major Japanese company (Kadokawa in this case), but the game was created entirely in RPG Maker. I can’t say that’s what I would have liked (or even expected) from the series, but as a fan of that series and of RPG Maker games, I at least had to check it out.

So right off the bat, I have to give the game some credit for its presentation. It may be an RPG Maker game, but there is a lot more effort put into it than what I usually see with such games. Graphically, there’s the detailed game world and the nice character sprites with their matching character portraits. The game world was clearly designed with authenticity in mind and it was nice to see all of the locations from the anime represented here. The characters all have some detailed sprites and, although the resolution on their matching portraits is low, it was nice to see those included as well. Given that the game was made in RPG Maker, I can’t say that it looks that great when blown up from its default resolution, but that’s just something I had to accept.

Then you have the game’s story. Again, this may be an RPG Maker game, but that absolutely did not stop the game’s developers from implementing a full-length story. There are entire story segments scattered throughout the game, with a lot of dialogue and even screenshots from the anime included. If anything, this is where the game’s budget shows. 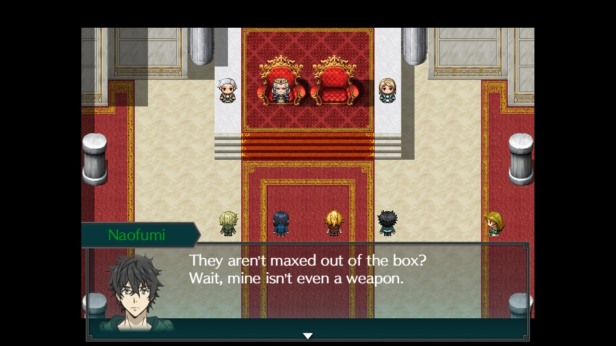 Despite bearing the Shield Hero name though, the story here simply does not match the quality of the anime. I’m a fan of the light novels, so I was a bit disappointed to see that the game skipped over a lot of content from them. However, as this is titled “Relive The Animation”, that’s at least expected. Even considering that though, the game still skips over bits and pieces of the anime, instead giving a more condensed version of that story. It is by no means the best way to experience the story and felt more like something directed at people that have already seen the anime. Again, this is suggested by the game’s title “Relive The Animation”, but the result is still disappointing to see.

Then there’s the gameplay. I can’t say I expected too much depth given that this is an RPG Maker game, but the gameplay here is just bad. Of course, the main culprit here being the combat. It’s as barebones as you can get, with the majority of the game’s combat relying on simple attack and defend moves. In fact this is how the entire early game is fought. You have Raphtalia attack an enemy and have Naofumi use his shield ability to protect here. That’s as complex as the combat gets at that point. Sure, later on you get skills and stuff, but even then, the combat just never reached the point where it felt satisfying. The fact that it’s all random encounters doesn’t help that much either. 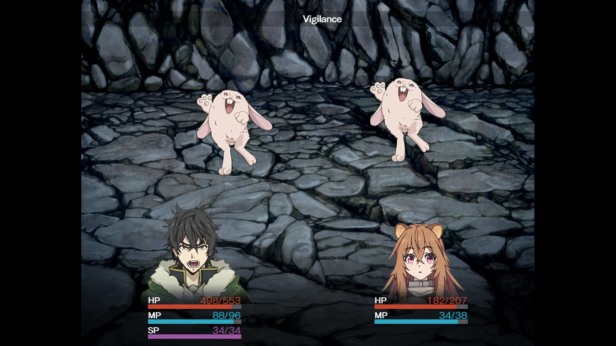 Aside from the combat, the rest of the gameplay will have you simply following the anime’s storyline. You’ll be doing a bit of crafting, a little bit of questing, and a whole lot of walking through dungeons and encountering random mobs. The music that accompanies this entire experience is unfortunately not that great either. It honestly becomes a bit grating to listen to after it repeats for the third or fourth time.

So given all of that, I cannot recommend The Rising of the Shield Hero: Relive The Animation. Despite obviously having some higher production values compared to other RPG Maker games, the end result still could not escape that feeling of “fangame, but with a budget”. The music is bad, the combat is boring, and the story, while a decent effort, simply does not match the quality of its anime counterpart. It may be worth the play if you’re a diehard fan of the anime, but otherwise give it a pass. 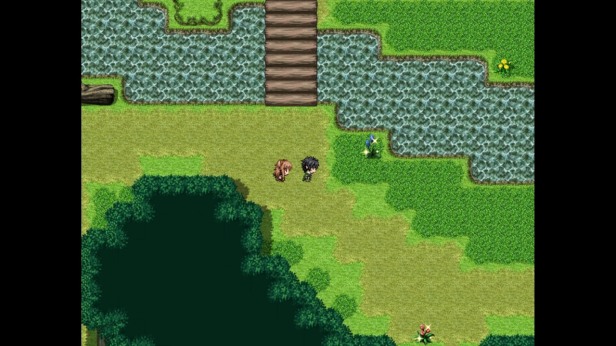 You can buy The Rising of the Shield Hero: Relive The Animation on Steam here.