Not even two weeks after Deliver Us The Moon was released, we got another sci-fi adventure game done in roughly the same style. Whereas the former was more of a thriller, this game is more of a horror-mystery with a massive Lovecraft influence. A lot of these recent Lovecraft games have not been all that great, so I was interested in seeing if that would change here.

First half of the story. Moons of Madness starts out strong. You’re presented with this almost-empty space station on Mars and a mystery to unravel surrounding it. You’ll be tasked with completing seemingly mundane tasks, tasks that will reveal bits and pieces to this larger mystery. You begin to question: why haven’t I seen any of the others? Why are base components being shuffled around? And what exactly is causing these malfunctions?

However, interspersed throughout the early game are sequences where it’s hard to tell if what you are seeing is actually real or simply some sort of dream or hallucination. It’s like an extra layer of story depth on top of an already interesting mystery. I personally love stories that take this approach, so Moons of Madness definitely hooked me there. The little bits of story scattered about the environment (like notes, emails, drawings, etc.) were a nice touch as well and definitely added to the overall experience. It’s kinda hard to describe such elements without spoiling, but I will say that the game does a good job laying the foundation for a greater mystery.

Great graphics and use of atmosphere. This is a game that really does a good job of making you feel alone on Mars. Sure, you’re in contact with your crewmates, but you don’t actually get to see them. The result is an atmosphere that, at times, just feels straight up desolate. Of course, this works wonders for the game’s story, a story that thrives on this feeling of emptiness and creates this overwhelming sense of horror that you can’t see or even understand at times. This is where the Lovecraft influence really shines, as that is a large part of what makes his works so good.

The fact that the game has some great graphics on top of that really drives it home though. The environments are detailed and full of little things to find, the lighting and particle effects look great, and the models are pretty nice too. Sure, it may not look as good as Deliver Us The Moon, but it’s better than what we usually see in the genre. 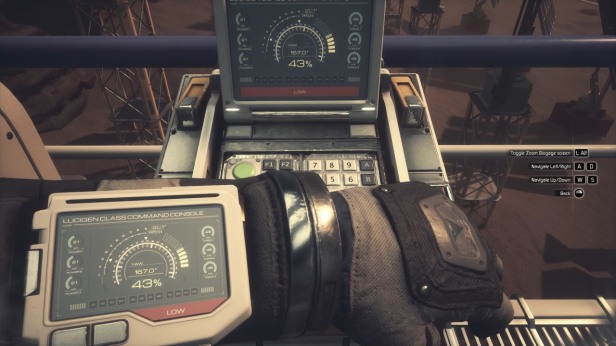 Tedious gameplay. As is the case with many games of this genre, Moons of Madness falls victim to tacked-on and tedious gameplay. While the vast majority of the game is simply walking around, there are some puzzles and other little gameplay elements throw in here and there, some of which are fine and actually fit, but most do not. Many of the game’s puzzles, for example, simply have you taking information from one area (like an email or a sticky note) and applying it somewhere else (like a series of buttons, a passcode, etc.). They’re not all that complex and feel more like a chore than an actual puzzle.

That’s just one side of the problem though, the other side being that these gameplay elements are just thrown into the game randomly, oftentimes interrupting the flow of the story. You’ll be in the middle of this big climatic story scene only to then have to rotate some cubes in order to progress it. It’s like the devs didn’t want their game to simply be a walking simulator, so they threw in some random gameplay elements for the sake of it. Unfortunately, this just has a negative effect on the overall pacing.

Second half of the story. Okay, so the first half of the story definitely had my interest, but the game pretty much threw away most of what made it good by the end of it. Around the halfway point, the story starts going all over the place, becoming a little too ambitious for its own good. A bunch of new story elements are introduced far too quickly for the rest of the game to keep up, which is exemplified by the game’s increased reliance on the use of emails, messages, and logs to tell the story for it. These can be fine when adding details to a story, but when a game starts relying on them as much as Moons of Madness does, it begins to lose the meaning behind “show, don’t tell”.

And then there’s the ending. I don’t know if the writers simply ran out of time, wanted to wrap up things quickly, or were trying to pave the way for future projects, but the ending definitely does not do the game any favors. It’s rushed, leaves a bunch of unanswered questions, and just really wasn’t all that satisfying. I’m all for leaving some things up to interpretation, but Moons of Madness felt more like an unfinished story in that regard.

Performance issues. Performance in Moons of Madness is all over the place. I’ll be in some areas where I’m easily hitting 100+ fps, but then dip to 40 or so in other areas that don’t even look that detailed compared to the areas before. Experimenting with the graphical settings remedies the problem to an extent, but the fps fluctuations are still very noticeable. The fact that the frames stutter whenever the game is loading something (which it does a lot) does not help either. I appreciate not having full-on loading screens, but some more effort could have gone into hiding the ones that are there.

As a fan of Lovecraftian horror, Moons of Madness is quite the disappointment. The story manages to hold strong for the first half of the game, but quickly loses itself in its own pacing by the end of it, resulting in an ending that hardly left me feeling satisfied. Of course, that’s even before you consider the gameplay side of things, gameplay that ranges from tacked-on to just unnecessary. The graphics may redeem it a little bit, but there are simply far better games in the same genre to choose from. Honestly, you’re better off just playing Deliver Us The Moon.

You can buy Moons of Madness on Steam here.