I have some fond memories playing the Gears of War games back during the early days of the Xbox 360. They were some of my favorite games for the console and remain two of my favorite third-person shooters. Well, over a decade later, the series is now getting the Halo Wars treatment, but as a turn-based tactics game instead of an RTS. It’s quite the genre departure, but oddly enough, it works.

Fun tactics gameplay. As a fan of genre, I gotta hand it to Gears Tactics. This is not a franchise I expected would ever touch the genre (let alone do a great job at it), but here we have not only an excellent addition to the series, but an excellent turn-based tactics game on its own. It’s got pretty much all the boxes checked there. Fun combat that actually has weight behind it, level layouts that give the payer plenty of approaches to choose from, and a nice strategic layer of depth to top it all off.

Just looking at a couple of the core gameplay mechanics really highlight that level of depth too. Take the execution mechanic for example. After downing an enemy, you’re able to approach said enemy and execute them, which grants one extra action for every other friendly unit. You can then use these additional actions to work towards another execution and, if you’re really good at it, you can keep stringing them together. It’s like a puzzle of sorts, trying to figure out the best combination of actions to extend your turn, while also making sure your units are behind decent cover. 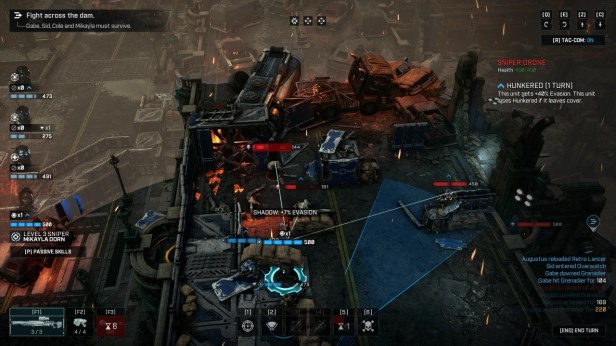 Then you have the overwatch mechanic, which allows you to use a unit’s unspent action points during an enemy’s turn, at the cost of exposing said unit from cover. This mechanic is a bit of a balancing act, as it can effectively wall off enemies, but it has to be done in such a way that your unit won’t just get popped before enemies walk into their overwatch range.

And on the topic of cover, the game does a great job making use of its environments. Elevation, material, cover height, you name it, it probably plays an important role. It wasn’t uncommon for me to knock back enemies into giant holes, blast through their cover with one unit only to finish them off with another, or come up with the most elaborate grenade bounces. Those are just a few examples though, there’s a lot more you can do with how complex the environments are. Combine that with the already solid combat and all of its mechanics and you’ve got the foundation for an excellent tactics game.

Cool skill system and abilities. One of the reasons why the combat works so well is the skill system that goes along with it. As you level up different units, you’re able to move them along a skill tree dependent on their unit type. This skill tree unlocks a variety of cool and unique abilities, some that require activation on the field, but some that are just passive. These can range anywhere from healing skills, to evasion buffs, to double shots, and pretty much everywhere in-between. There’s a lot of customization to be had here and given that each different unit type can go down any of their four corresponding skill paths, there’s a lot of flexibility in what you can bring to each individual mission.

Just as with the core combat mechanics, the different skills and such add even more strategy to the already solid gameplay. I had a lot of fun building a small squad around the use of a sniper, including abilities to buff her evasion, give her extra actions, and to draw enemy fire away. Of course, this was on top of the skills she already had, which granted her stuff like guaranteed crits, extra actions on hit, and a chance to gain additional ammo from kills. It was honestly kinda broken at times, but it was a lot of fun to experiment with regardless.

Nice graphics and overall presentation. There’s no denying that Gears Tactics is a good-looking game. From the environments that have little details scattered all over to the excellent use of lighting that accompanies it, there’s a lot that goes into making the game look as good as it does. You could go down the list of its graphical features, but you really have to look at the game in motion to get the full picture. As far as turn-based tactics games go, it’s probably the best-looking I’ve played.

Of course, that’s not the only thing feeding into the game’s presentation. There’s also the nice sound design, the fitting soundtrack, and the overall aesthetic that comes with being a Gears of War game. Despite being a complete genre departure from the rest of the series, it manages to feel right at home within it.

Excellent settings menu and optimization. For how good the game looks, you would expect it to be rather taxing on your system, but with Gears Tactics, that never ended up being a problem. The reason is twofold. On one hand, you have the game’s excellent settings menu. This menu not only has a ton of different options to change, but describes what they are and gives you a visual representation of each as you change them. It makes it much easier to see the impact that certain options can have visually. If you want to see how they affect your performance, the game provides a very cool benchmark feature to help with just that.

I went into the game expecting to have to change a few of these, but didn’t end up having to do so because the game is already nicely optimized to begin with. In fact, the overall polish on the game, not just its optimization, is some of the best I’ve seen from a recent AAA title. I managed to play through the entire game without running into any major fps drops, crashes, freezes, or even bugs outside of the occasional odd ragdoll or two. It’s an incredibly well-polished game and is definitely an example for others to follow.

Subpar storyline. While I do give the game some credit for at least including a full-length campaign story, the actual content of that story is pretty subpar. The plot is generic, the pacing isn’t really managed that well, and the characters are badly written too. In fact, the characters are so barebones that they’re really only there to serve their one purpose in the story. They’re given the bare minimum background story and then the game moves on.

Granted, I can’t say I went into the game expecting much in this department (given that this is Gears of War after all), but I had at least expected something on par with the main games. As it stands, the story here is just a means to connect a bunch of different levels together.

Lack of mission variety. So here’s the thing with Gears Tactics. The first half of the game is excellent and is easily something I would consider for my yearly top 10 games list. However, once you get past that first half of the game, the quality drops hard. The reason? Well, the game simply runs out of new and interesting content to throw at you. While the first half is constantly introducing new mission types, enemies, weapons, and level layouts, by the time you get around to the second half, you’ve seen pretty much everything the game has to offer. 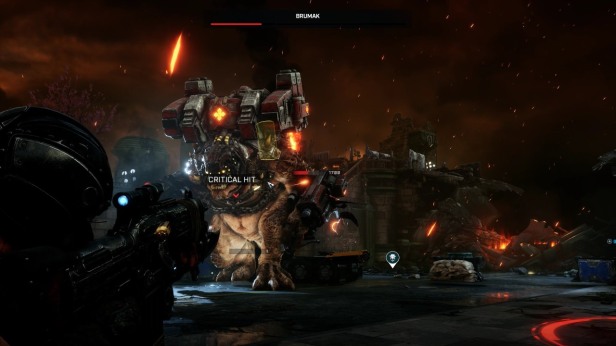 You’ll end up falling into a cycle of completing a story mission or two, completing a few side missions to unlock the next story mission, and repeating until the game is cleared. The new story missions at least give you the occasional new enemy or level layout, but the side missions just have you repeating the same mission types on the same maps, oftentimes with annoying restrictions like only being able to use two characters or only having one bullet per magazine. I’m all for having more content in a game, but when it ends up as repetitive filer, it just damages the overall experience.

Annoying recruitment system. Gears Tactics is a game that will constantly bombard you with new units. Given the nature of the genre, this is expected (at least to an extent), but the way that the game goes about here did become a bit annoying as it went on. The problem is that units simply level up too slowly, forcing you to constantly swap out your already customized units for new ones every new story act. Of course, this means you’ll have to assign skill points, weapon upgrades, armor upgrades, and any customization that you may want. This has to be done for every single new unit though, so it quickly becomes a very tedious process once you have a decent amount of upgrades unlocked.

And it’s not like you can just stick with the same units everytime to avoid this problem. When doing side missions, once you complete one with a given unit, that unit is unable to participate in further ones until the next story mission is unlocked. This not only forces you to keep up with new recruits, but also makes sure that the ones you already have are unable to stack levels. It’s a pretty annoying cycle and is part of the reason why the latter half of the game dropped off so hard.

For being such a genre departure, its honestly surprising how well Gears Tactics plays. It not only fits perfectly into the series, but manages to do so with some excellent turn-based tactics gameplay and some great graphics and optimization to match. For the first half of the game, it’s easily some of the best I’ve seen from the genre. However, that’s just for the first half. By the time the latter half rolls around, you’ve already seen all the game has to offer. The mission variety drops off hard and the recruitment system just becomes a pain to deal with.

It’s a disappointing turnaround for sure, but I would still recommend the game to fans of the genre, maybe to pick up in a sale. You don’t need to be a Gears fan to appreciate the level of strategic depth offered in its gameplay. Just be ready for a drop in quality later on.

You can buy Gears Tactics on Steam here.