It’s finally here. One of my most anticipated visual novels of the year. After the great showing that was Sabbat of the Witch back in 2018, NekoNyan returns to Steam with another Yuzusoft title. Not only did this game commemorate Yuzusoft’s 10th anniversary, but it won numerous awards on the year of its release in Japan. As such, I was very excited to finally get to play it in English.

Excellent art and music. So right off the bat, if you’re not familiar with Yuzusoft’s art and production values, it’s pretty much some of the best you’ll find in the medium. Not only does the game run natively at 1080p (which is already rare for a visual novel), but it does so with some excellent character designs, high-quality CGs, and plenty of movement. In fact, it’s not unusual for a character to go through three or four different facial expressions and/or poses when delivering just a single line. Couple that with the detailed character designs and CGs that perfectly match the game’s traditional Japanese setting and you have quite the visual experience.

This extends into the game’s audio, with Senren＊Banka offering up both some nice voice acting and some really good background music. I wasn’t impressed with the music in Sabbat of the Witch, so I honestly wasn’t expecting the music here to be as good as it is. There’s quite the assortment too, including slower piano tracks for the romantic scenes, high-energy electronic tracks for the game’s action scenes, and a bunch of tracks using traditional Japanese instruments to match the game’s setting. In fact, I’d say about half of the game’s music features the shamisen or koto in some form. It makes for a very nice overall soundtrack and the best I’ve seen from Yuzusoft thus far.

Great mixture of fantasy and romance elements. Despite how it looks, Senren＊Banka is actually more of a fantasy story than it is a romance story. It takes place in this rural Japanese town cut off from most of society, features themes from Japanese mythology, and has both a priestess character and a sentient sword character (both with their own respective routes). It’s a fantasy-heavy visual novel, but yet it manages to actually pull off some decent romance regardless. For most of the common route, this romance is pretty light, but once you start getting into the character routes, the game then ramps it up, slowly introducing more romance themes while still never straying too far from its fantasy base.

Unlike in Sabbat of the Witch, where the fantasy elements felt like an afterthought to the romance, Senren＊Banka manages to find a really nice balance there. The romance gets enough focus that it still progresses in a reasonable manner, yet leaves room for the main story to fully develop. And that main story isn’t even that bad. Sure, it’s nothing special, but it never grows too ambitious for its own good and doesn’t overstay its welcome, making for a really good vessel for the romance bits. The two work great together and, although the writing still has some issues, make for a pretty cool VN experience.

Fun and likable characters. The romance elements would be completely wasted if the characters weren’t interesting, but that is fortunately not a problem with Senren＊Banka. Here we have a cast of heroines that are not only decently developed writing-wise, but are quirky enough in their own right that it’s kinda hard not to like them. You’ve got the shrine maiden who has a problem with cat ears that keep appearing on her head, a kunoichi who has sworn to protect said shrine maiden, a sentient sword spirit that is accidentally summoned by the game’s protagonist, and a blonde exchange student that seems to only know how to speak old Japanese.

None of these characters felt like they were introduced just to fill a specific trope, but rather felt like natural additions to the overall story. They each have some backstory related to the main narrative that you’ll find out through their respective routes, routes that also develop said characters at the same time. They’re fun to interact with and really carry the experience through the game’s writing problems, which I’ll get into later.

Cool flowchart feature. As someone that often plays visual novels to 100% completion, I always have some sort of guide open to help me get to each route. I reference said guide whenever I’m asked to make a decision, lest I want to fall onto the wrong route or put myself on the track to a bad ending. However, Senren＊Banka is one of the first VNs I’ve played in quite some time where I didn’t actually have to do this. That is because the game offers this very cool flowchart feature. At any time during play, you can open said flowchart and see which choices led you where and which scenes you have and/or haven’t read. 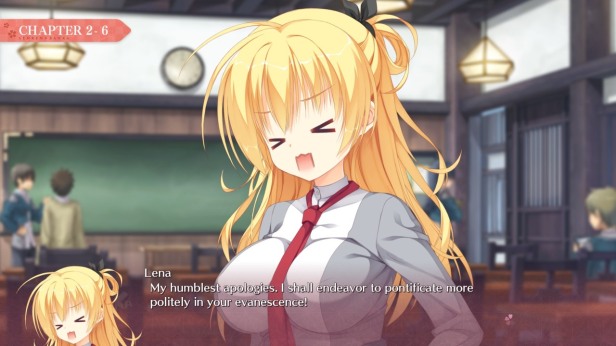 This makes it incredibly easy to get on the route you want and also eliminates the need for any sort of guide. It’s even cooler that you can access the flowchart from the main menu and jump to any scene in the game while also selecting any choice you want up to that point — it is no longer necessary to skip through the common route and select the choices you want. It’s an immense time-saving feature and one I wish more VNs would adopt.

Plenty of configuration options. Yuzusoft and NekoNyan have shown once again what a modern visual novel release should look like. On top of the high-effort art, Senren＊Banka also has a bunch of settings to customize the reading experience. These include the usuals like text speed, auto speed, skip options, and display options, but also includes some more uncommon ones, including game speed, panic settings, chapter and music displays, and font choice.

That’s not all though, there’s even text-to-speech support, simultaneous multi-language display, and fully rebindable keyboard and mouse controls. In fact, the game even worked with my Xbox controller without any sort of prior setup. Senren＊Banka really goes above and beyond what I would normally expect from a visual novel, setting the example for others to follow.

Slow overall pacing. The main problem I have with Senren＊Banka‘s writing is just how slow it is. This is not one of those VNs where the common route is slow and the character routes pick up pace later nor one of those VNs with constantly shifting pacing. Senren＊Banka is just slow 100% of the time. Whether you’re in the common route or in one of the game’s many character routes, the pacing just never really changes. Don’t get me wrong, I think a VN with slow pacing can be great, especially so because most VNs suffer from writing issues caused by erratic pacing, but in Senren＊Banka‘s case, it just makes everything feel dragged out.

This is a VN that stretches its story to the absolute limit, dragging out story scenes, giving overly wordy descriptions, and adding in a bunch of filler along the way. A story event that can maybe take half a day to resolve somehow takes several days to do so, with Murasame’s route being the worst offender here. The characters carry the story to an extent, but it becomes very hard not to notice just how slow everything is, especially once you get into the character routes where major story developments usually happen. It really brings down the reading experience, making it difficult to read for more than a couple hours at a time. 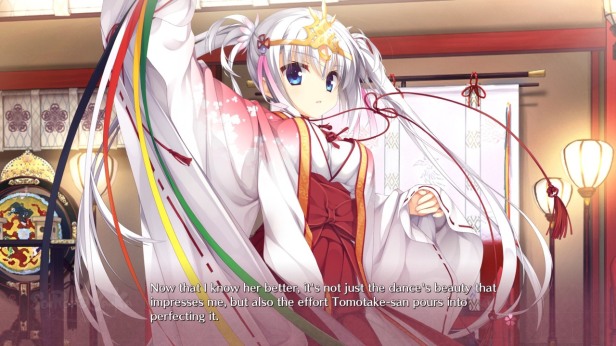 What makes it worse is that it is 100% noticeable that these filler scenes are just there to serve the H-scenes, as the protagonist and heroine will often discuss when the next time they can do it is or what they’ll do during it. Yoshino and Mako’s routes are the main offenders there. It’s like the writers knew they had to include the H-scenes somewhere, but spent so much time developing the story and characters elsewhere that they were forced to dump them all at the end of each character route and hand over the reigns to a teenager to write. Again, I don’t have any problem with such scenes being included, but when it leads to issues like this, it does bring down the experience a bit. Fortunately, it’s only around the last third of each character route that suffers from this, but its still an issue regardless. 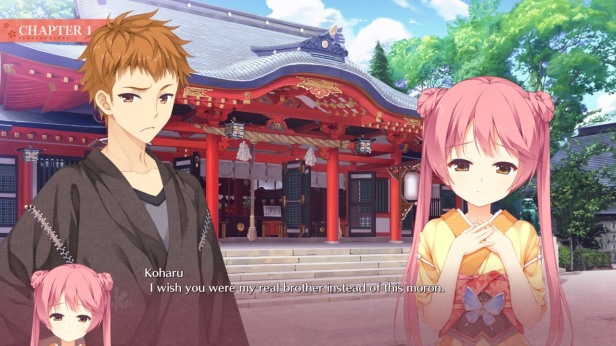 Although not quite as good as Yuzusoft’s last English release, Sabbat of the Witch, Senren＊Banka is still a good visual novel all things considered. The mix of fantasy and romance is done well, the art and music are top-notch, the flowchart feature is cool, and the characters are interesting enough that they carry the experience through the game’s writing problems. The slow pacing and filler scenes do make the game hard to play for longer sessions, but it’s a fun enough experience to play though in smaller chunks, enough so to warrant recommending.

You can buy Senren＊Banka on Steam here.