Another two years, another version of UNDER NIGHT IN-BIRTH released. This time we went from Exe:Late[st] to Exe:Late[cl-r], the fourth major version of the title released thus far. I gave Late[st] a favorable review a couple years ago and have only gotten more into fighting games since then, so I was excited to jump back into it and give it another shot.

So to give a quick recap of my last review, I did end up liking the game and giving it a good score. It’s got an excellent tutorial mode that makes it easy for beginners to get into it, a bunch of different game modes to try out if you don’t want to play strictly online, and some very cool mechanics to play around with, such as the grind grid. This, of course, is on top of the already well-polished fighting gameplay, up there with games like BlazBlue and Guilty Gear. In fact, now that I’ve played more fighting games since I did that original review, I’ve grown to appreciate just how well the movement flows here in UNDER NIGHT IN-BIRTH. You have so many different movement options available to you, even when in mid-air. It’s fun to jump around with so much freedom and the fact that a lot of it can be built into combos just makes it that much better.

So as for what this version of the game adds over the last version, the devs have stated that there are over 1000 changes. Of course, most of these are balance changes, but there are new moves as well. There’s also an update to the game’s gallery mode, a new stage, and, of course, new background music. The game’s music has always been a highlight for me, so it’s nice to get more of that.

However, the major addition here is the new DLC character, Londrekia. From what I’ve played of him, he’s actually pretty fun. His moves have an ice theme to them, similar to Jin Kisaragi from BlazBlue. You’re able to shoot ice across the screen, freeze enemies with certain moves, and dance around the screen while flailing your weapon about. He seems to be pretty beginner friendly too, as I was able to pick him up and slap around my friend within just a couple matches. Some may argue that this may compromise his high-level play, but from what I’ve seen in the game’s online mode, I still have a lot to learn. And of course, I should mention that the character comes with his own arcade story, so there’s a little bit more singleplayer content to play through as well.

Unfortunately though, a new version could not save the game’s online multiplayer mode, which is severely lacking in players at the time of writing. I hopped onto the online multiplayer during a Friday afternoon and found a grand total of one player match. I had better luck with ranked matches, where I was able to find a few matches after waiting several minutes. However, the problem there is that this was after removing all filters, so I was playing with players with higher ping and players that vastly outranked me. In fact, I pretty much got slapped in every match. 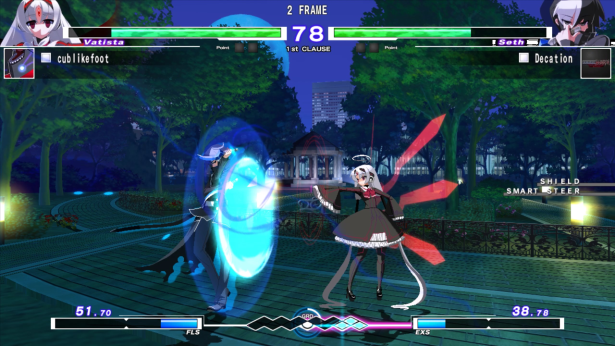 It has the same problem that Late[st] did two years ago, but this time with even less players online at any given moment. At the time of writing, the game averages about 130 players on Steam. However, this number is any person in any mode, not just the game’s online mode. This number has also been steadily dropping since release, so I can only imagine how bad it will be in a couple months. The game currently has no crossplay either and it really needs it at this point.

Aside from the multiplayer issue, the issues I described in my previous review still hold true here. There’s still no borderless window option and the diagonal inputs are still very narrow. Now that I’ve played more fighting games, that latter issue has just become that much more noticeable to me. There’s like a 10 degree sweet spot you need to hit in order to properly input diagonals, which is rather difficult if you’re playing using an analog stick.

Overall though, I would still recommend UNDER NIGHT IN-BIRTH Exe:Late[cl-r]. It’s still the same great fighting game as it was in the last version, but with some cool new additions this time around. The fighting mechanics are polished, the new character is fun, and the tutorial mode makes it easy for newcomers to get the hang of things. Just don’t go into it expecting an active online multiplayer mode, you’ll be much better off if you have a friend or two to play the game with. For those that already owned Exe:Late[st] on Steam, you get the [cl-r] update for free, so there’s that too.

You can buy UNDER NIGHT IN-BIRTH Exe:Late[cl-r] on Steam here.