Every once in a while a game comes around that actually tries something new. It may be its visual style, its gameplay, or even its genre combinations. You never see the AAA studios do it, so it’s usually these small indie projects. In Other Waters is one of these games, offering up a gameplay experience quite unlike anything I’ve ever played.

The concept behind In Other Waters goes something like this: You control an AI stuck in an ocean on some alien planet, with your goal simply being to explore and unravel the mystery of what happened there. The gameplay can be divided into two parts: exploration and xenobiology. Exploration is done by moving along a web of anchor points scattered about the map. It’s a bit tedious in that, at every anchor point, you have to scan the area, select the next anchor point, set it as the destination, and then confirm your move. It’s even more so when you realize you just went down the wrong path and now have to go back through all of that.

Then there’s the xenobiology side to the game. As you move around the map, you’ll come across various forms of alien life, life that can be observed, sampled, and analyzed. Once you’ve observed enough samples of a specific lifeform, you complete its initial entry into your taxonomy, which can then be furthered by collecting samples and analyzing them back at the base. These lifeforms are also used in the gameplay, with one allowing you to clear away blockages on the map when deployed and another that causes fungi to grow and divert ocean currents for example.

It may sound like a rather shallow system, but there’s actually a lot of detail to it. The dev has entire walls of text dedicated to each lifeform, with a drawing unlocked once you’ve fully completed a lifeform’s study. It was cool to see my taxonomy increase over the course of the game with such vivid descriptions, it really made it feel like I was entering another world.

And despite the the problems I mentioned previously about the movement, the overall exploration and alien study combo was kind of calming in a way. In fact, it’s pretty much the closest to ASMR a video game has been for me. Slowly moving around, discovering new life, and interacting with the environment using said life was just somehow oddly relaxing. Sure, there isn’t much depth to it, but the gameplay complements the overall story and atmosphere well. 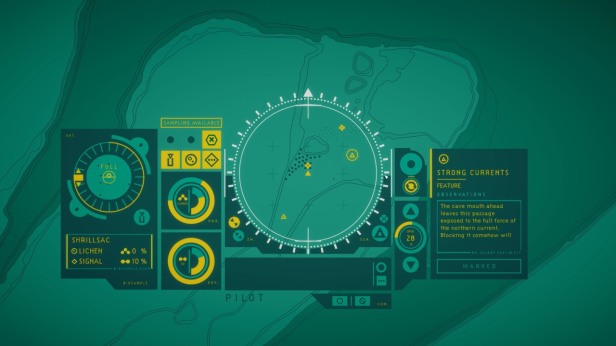 The story has you unraveling the mystery of what happened on the planet, as the human you are guiding around was supposed to meet up with another that has since disappeared and left behind an abandoned base and diving suit. It’s a slow-paced story for sure, but given the kind of atmosphere that the game goes for, it’s the perfect fit. It gives the overall experience a goal to work towards outside of just filling up your taxonomy.

And of course, I should mention the game’s aesthetic. It’s got a simplistic art style, one that makes use of very few colors. The backgrounds are usually one shade of color with a contrasting color making up the various alien lifeforms and other interactive objects. The soundtrack is equally simplistic. It’s a nice, yet mellow soundtrack and a large reason why the game was such a relaxing experience to me.

In Other Waters is good game all things considered. The exploration and xenobiology mechanics, while rather simplistic, complement the game’s story and general atmosphere well, making for a pretty relaxing experience.  It’s not the type of game I could see recommending to everyone, but for those that are into more experimental indies, it’s definitely worth a look.

You can buy In Other Waters on Steam here.