The year is 2020 and we have been graced with a new entry in the long-running Romance of The Three Kingdoms strategy series. As someone that’s a fan of the time period and these types of strategy games in general, I had to give it a shot.

So for those not familiar with it, the Romance of The Three Kingdoms series is a grand strategy series with a heavy focus on simulation. That means that you’ll be playing through a bunch of strategy scenarios as they happened in history. This applies not just to the regions and events, but stuff like character lifespans as well. Of course, these options can be configured to an extent, but I thought it was very cool how in-depth the game went with regards to maintaining a historically accurate experience.

As for the actual gameplay, that’s where the problems begin to show. While the game does have some good strategy mechanics, the gameplay as a whole just comes off as shallow. You get into a scenario, set up your administration, cities, and combat units, direct those combat units to expand your territory, and pretty much wait for stuff to happen. Setting up everything is fun, but after you’ve been in a single scenario for a bit, it just becomes a bit repetitive, especially with the amount of micromanaging required later on. 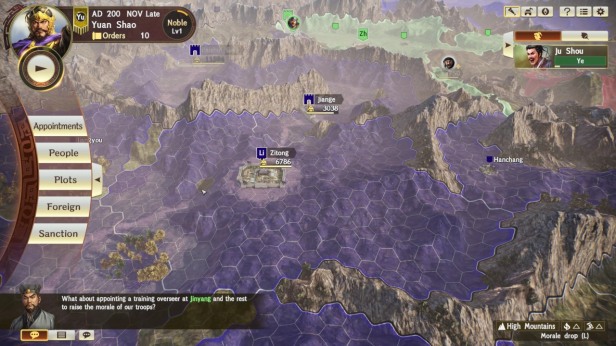 However, my main problem with the game was actually not with its gameplay, but rather with regards to the technical side of things. Immediately upon getting in-game, I noticed the game’s lackluster fps. Unfortunately, this is a full-priced 2020 PC game release that is capped at 30fps. This is noticeable in just about every area of the game, including terrain animations, unit movements, and even dialogue and event scenes. It also makes the camera very jittery when moving around. For a 2020 PC release, this simply isn’t acceptable. A 60fps cap is already becoming outdated, so having a 30fps cap is an absolute no-go. It’s odd because the devs were able to do 60fps in NOBUNAGA’S AMBITION: Taishi just over two years ago, so there really isn’t a reason for a downgrade here.

And on that topic, I should mention the game’s graphics. Put simply: they’re not that good. It’s about the quality I would expect from maybe a PS3 or Xbox 360 game, which, when combined with the 30fps cap, leads me to believe that Koei Tecmo is stuck a decade in the past. They go on to combine this with a UI that looks straight out of a mobile game, with large buttons and all, definitely not something that seems suited for PC. 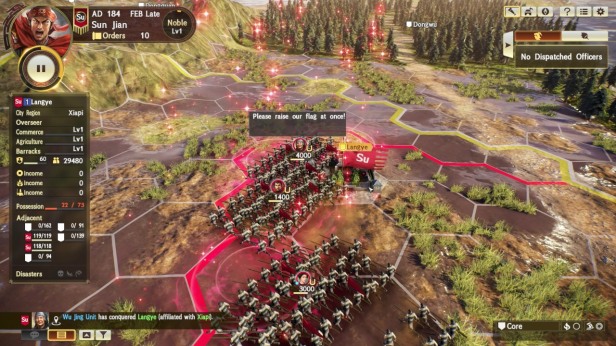 On top of that, Romance of The Three Kingdoms XIV also has this nasty white flickering when playing the game in fullscreen. My recordings did not capture the issue and it appears to happen in-between frames, so it’s likely a side effect of playing a 30fps game on a high refresh rate monitor. Whatever the case may be, the flickering actually became a bit nauseating, so I ended up playing the game in windowed instead of my usual fullscreen.

Given all of that, I cannot recommend Romance of The Three Kingdoms XIV. It’s a 2020 PC release stuck at 30fps, with subpar graphics, and some other visual issues on top of that. Even looking past its technical faults, the strategy mechanics are okay at best, with the gameplay falling into a repetitive loop once it gets going. I can’t speak for past entries in the series (as I haven’t played any of them long enough to form an opinion), but I would honestly recommend looking at one of the recent Nobunaga’s Ambition games over this one.

You can buy Romance of The Three Kingdoms XIV on Steam here.