I tend to avoid Early Access releases, but this is one I was a bit excited for. It comes from Passtech Games, the same studio that did Masters of Anima a couple years back. I enjoyed my time with that game and gave it a good review, so I was interested in seeing how their newest game would shape up.

So right off the bat, Curse of the Dead Gods is already a massive visual improvement over Masters of Anima. It takes the same overhead camera approach, but with much cleaner visuals. There’s a nice amount of detail, great coloring, and some excellent use of lighting, which is a definite plus considering that lighting plays a huge role in the gameplay.

The gameplay plays pretty much like any other roguelite. You work your way through randomized dungeons, picking up loot and slaying monsters along the way. This is done using a number of different weapons, including swords, guns, hammers, etc. The game has this cool multi-weapon combat mechanic, allowing you to seamlessly string together combos using multiple weapons. You can start by slapping an enemy with a sword a couple times and then finish them off with a blast to the face from your gun, it’s a very satisfying mechanic to play around with. You can even throw in a few dodge rolls and parries in the middle of that.

In fact, the game encourages this kind of combat, as your stamina decreases with each move, so there will come a point when you have to dodge an attack. It becomes a balancing act of doing as much damage as possible, but keeping enough stamina to dodge attacks. The result is some very satisfying combat, with hits that actually feel impactful, and movement that doesn’t feel clunky in the slightest.

And on the topic of balancing acts, the game’s exploration and loot could also be described as such. Every time you enter a new area, you gain curse points, which (once they reach a certain amount) add a new curse to your playthrough. These can include hallucinations on taking damage, traps that automatically activate, or enemies that spawn additional enemies when killed. Ideally, you want to avoid getting these curses, but you can also pay for weapons and upgrades by cursing yourself instead of paying gold. Again, a balancing act. It’s a very cool system and makes for some pretty fun exploration.

As for the game’s performance, I didn’t encounter any major issues there. It looks great and runs fine at 1440p and 155fps. I didn’t run into any frame drops, crashes, or even glitches and bugs during my time with the game. Given that many Early Access games release with all sorts of these problems, I have to give the devs some credit here. I was a bit disappointed that the graphical settings are as limited as they are, but hopefully this is something we can see improved with time. Some better anti-aliasing outside of FXAA would be a great start.

And when it comes to controls, I also found no problems there. The game offers fully remappable keyboard controls and full controller support. The latter is the recommended option and the one I went with, as it felt better to play with than the keyboard and mouse option. 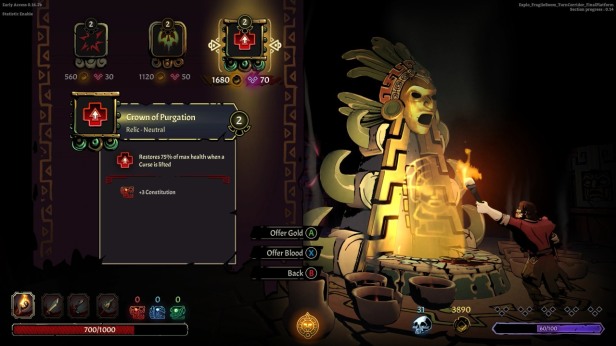 Outside of that, the one major complaint I have with the game would be its lack of content. Of course, this is an Early Access game, so I can’t say that I didn’t expect it, but it should be noted regardless. Although the weapons, upgrades, and enemies that are there are good, I did grow tired of seeing the same thing over and over after playing the game for a few hours. This even applies to the room layouts, which I started noticing duplicates of not even an hour into the game. Again, these layouts are fine, there just needs to be more of them.

With that said, I will be giving Curse of the Dead Gods a light recommendation. It’s got some great visuals, fun gameplay, and some nice performance considering it just came out in Early Access. It’s definitely a fun game as it is, even if it is a bit light on the content. However, it may be worth waiting for future updates before finally jumping in. The devs have laid out a rather ambitious roadmap for the coming months, so the wait likely won’t even be that long.

You can buy Curse of the Dead Gods on Steam here.