Love is a very complex emotion. It has its ups and downs, its drama, and even comedy at times. With visual novels, the focus is usually on the lighter side — the happier side. As such, they oftentimes miss the harsh reality that love can bring, as its not always sunshine and rainbows. That is where Bokuten comes in, a VN that aims to provide a deeper look into the darker side of love. And of course, what better way to do so than through the guardians of human love themselves: angels.

Excellent common route. What immediately sets Bokuten apart from other VNs is how it goes about its common route. It does this in a few ways, most notably with regards to its structure. Instead of being one long thing, the common route is divided into six distinct chapters, all with their own set of characters and a conflict that needs to be resolved. These characters come in the form of a couple in need of help, and you as the protagonist (along with your angel friend) must either work to solve the problem or leave the couple be and hope it gets resolved that way. It’s kinda episodic in this way, but there is a more overarching story that is developed throughout, one that becomes much more prominent in the later chapters.

However, it isn’t just the structure that makes the common route so good, the writing and pacing are also noteworthy. Unlike many other VNs in the same genre, Bokuten is not a game full of the usual fluff and such to pad out the story. You won’t be wasting your time reading pointless cooking scenes, but rather working towards resolving whatever conflict the chapter presents to you. As a result, the pacing never really felt too slow, nor did it feel too fast. It managed to find a nice balance, one that it carried through all of the common route chapters. It was honestly one of the most refreshing common routes I’ve ever read, and was definitely the game’s strongest aspect.

Interesting protagonist. Part of the reason why the common route works so well is that you’re viewing it through the eyes of the game’s unique protagonist. Unlike other VNs, this is a protagonist that is not interested in love, not even in the slightest. In fact, he’s one of the few characters tagged as asexual on VNDB. Of course, given that the game’s central theme is love and that this protagonist somehow finds himself teamed up with an angel, this makes for a very interesting contrast. Not only is there the dynamic between the two that’s interesting, but there’s the manner in which the protagonist goes about resolving each couple’s problems. As with the common route, I found it to be really refreshing, especially so because the contrast is handled so well here.

Choices that are both impactful and make you think. A pet peeve of mine I have with most VNs is that a lot of the choices you make are either meaningless or have a very clear and immediate outcome. Some are so bad that they just straight up list the heroine’s names for you to select to get onto their route. Bokuten, however, offers up choices that are not only impactful, but actually make you stop to consider their potential outcome.

As the game is an utsuge (a term that literally means “depressing game”), there are no happy endings. When making decisions regarding what to do with each couple in the common route, there’s always some sort of trade-off to consider. For example, helping one character get with her crush will cause that character to lose her only friend, whereas not helping her will result in her never finding love. You can’t always win with love, something that Bokuten makes very clear with its choices here.

Great translation. Something that MangaGamer has been on top of lately is the quality of their localizations and Bokuten is no exception. I read through the entire game and did not come across a single typo, grammar issue, or any other localization misstep. I’m the kind of guy that screenshots such issues when I do run into them and I finished Bokuten with a grand total of 0 of those screenshots. The game either has some really well-hidden typos or they simply don’t exist at all, and I’m leaning more so to the latter. Of course, there’s more to a good localization than just that, but considering that we get a lot of VNs these days full of such issues, it was nice to see one that didn’t have any. 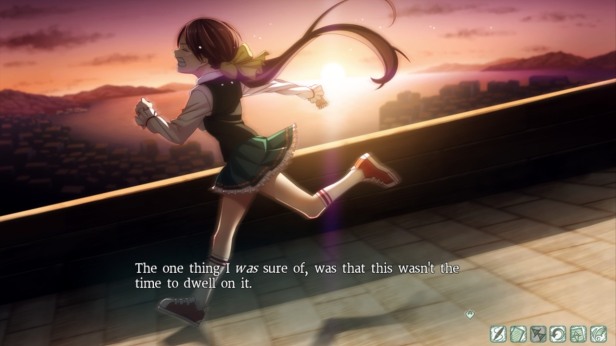 Tacked on character routes. For everything that the game does right during the common route, it was disappointing to see that the character routes couldn’t match. Bokuten has a total of three character routes and one true ending and, while one of those character routes is fine, the other two feel like they were tacked on. Not only do they lack the writing quality of the common route, but they’re focused on characters that hardly even had a presence in that common route. And as if that wasn’t bad enough, the protagonist also has a complete personality shift during those two routes, a shift that honestly came out of nowhere. The result, of course, are routes that hardly felt like they belonged given the quality just prior to them. Fortunately, these two routes were the shortest of the bunch, but still disappointing regardless.

Subpar true ending. So Bokuten has a rather odd ending. Not in the sense that the ending itself is odd, but rather in how it is structured. You have this incredibly well-paced common route and a true route that starts off strong, but once you get around to the last 20% or so of that route, the pacing ramps up incredibly and the story gets a little too ambitious for its own good. The idea behind it is fine (and was actually pretty interesting), but it was not given the time it needed to develop — to feel like a natural progression in the overall story. As it stands, it just comes out of nowhere and actually made me laugh, the opposite of what I was supposed to feel. Unfortunately, this leaves us with an ending that hardly has the impact that it was intended to have. It’s not like the game doesn’t know how to do a good ending (the ending for the childhood friend route was great), but it just didn’t do so for the true one.

It may have some issues regarding a couple of its character routes and true ending, but Bokuten is a solid visual novel all things considered. The protagonist is great, the choices actually have an impact, the translation is good, the art is fine, and the common route pretty much carries the entire experience on top of that. It’s not a perfect visual novel, but is much better than what we usually see in the medium and is definitely one I would recommend for fans and newcomers alike. Granted, it would be a very dark introduction to the medium for newcomers, but an introduction nonetheless.

You can buy Bokuten – Why I Became an Angel on Steam here and on MangaGamer here.